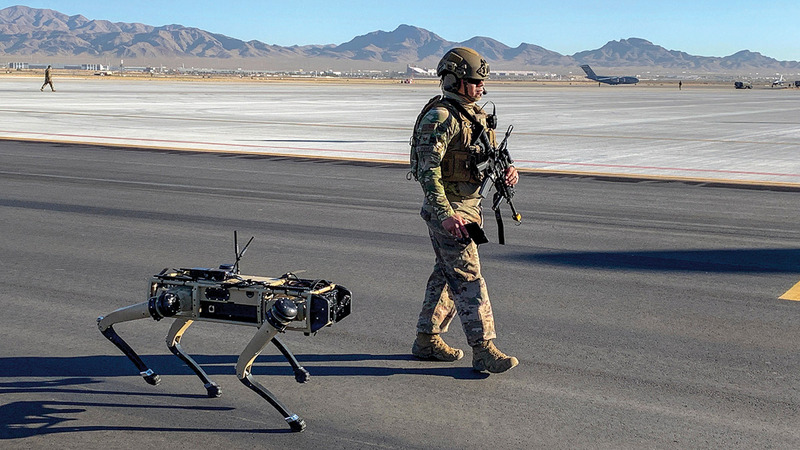 Some considered the project a waste of taxpayers' money

And the Department of Homeland Security recently published pictures of these robots, when it revealed the details related to testing this technology.

Officials have praised the power of these robots as a "force multiplier" that can enhance the safety of policemen who "patrol" the border by reducing their exposure to life-threatening risks.

An article promoting the tests on the DHS Directorate of Science and Technology website noted that these robotic dogs known as “automated ground control vehicles” could one day become “Customs and Border Protection agent, or Border Patrol’s best friend.” "Do not be surprised, if you see the future of the robot (Fido) in the fields, walking side by side with the soldiers of the customs and border guards," the article stated.

But it seems that the details of the test surprised some people, prompting a wave of reactions on social media, which compared this image to bleak scenes from science fiction films, such as the movie "Black Mirror".

“It really sounded like a slap in the face,” says Vicki Gubica, director of the Southern Border Communities Coalition, a group that criticizes the initiative as a waste of taxpayer money, which would be better spent developing systems aimed at making border protection agents accountable.

Gubica describes herself as a tech and dog lover (she owns five), but says she doesn't see anything good in recent descriptions of the robotic dogs, which she says offer a "helping paw".

For several years, Gubica's organization has warned that the militarization of the place along the border with Mexico endangers the lives of the communities on the border as well as the migrants.

She says these robotic dogs are the latest example.

“There are other technologies being used now that need to be scaled back," says Gubica. "It adds yet another form of troubling surveillance technology.

"Honestly and certainly this thing was made for a very aggressive purpose, like battlefields, rather than for communities," she added.

Ghost Robotics, a Philadelphia-based company that makes these robotic dogs, says there is nothing to fear.

“We are focused on making the right thing," said CEO Jeren Barkke.

Barkikh says his company's robots offer a number of benefits in border areas.

The project is under investigation

A DHS spokesperson said the project is still in the research and development phase, and there is no program to deploy these robotic dogs yet.

However, there are many serious issues that this technology raises to the surface.

There is a big difference between science fiction and reality.

In 1940, an aluminum dog weighing about 30 kilograms was shown at an international exhibition called "Sparco", where it could walk, bark, and sit.

In the 1960s, the Jetson family adopted a nuclear-powered electronic dog called "Lectronimo", before deciding to donate it to the police department.

• Officials praised the power of these robots as a “force multiplier” that can enhance the safety of policemen who carry out “patrol” work to protect the borders by reducing their exposure to life-threatening risks.