The Ethiopian Prime Minister, Abi Ahmed, officially launched yesterday the process of producing electricity from the Renaissance Dam on the Blue Nile, in an important stage of the controversial project worth billions of dollars. Abi Ahmed, accompanied by high-ranking officials, toured the power plant and pressured a group 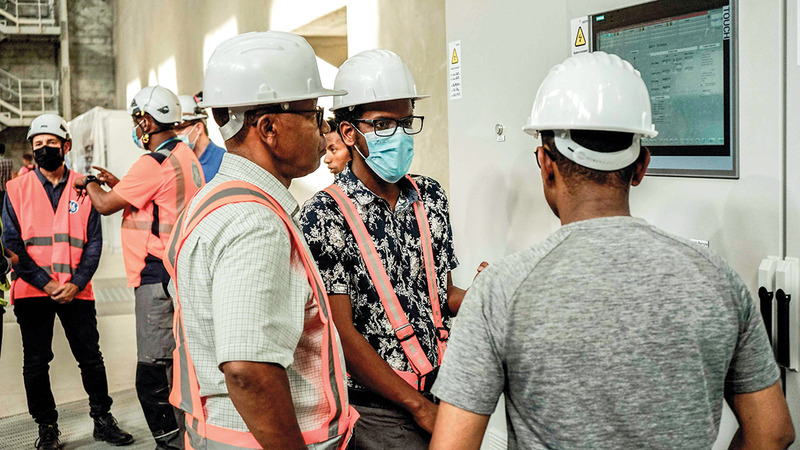 Workers at the Renaissance Dam prepare to operate the turbines.

The Ethiopian Prime Minister, Abi Ahmed, officially launched yesterday the process of producing electricity from the Renaissance Dam on the Blue Nile, in an important stage of the controversial project worth billions of dollars.

Accompanied by high-ranking officials, Abiy Ahmed toured the power plant and pressed a set of buttons on an electronic screen, a move officials said launched the production process.

"The day for which every Ethiopian sacrificed and prayed and hoped has arrived," he added.

In 2011, Ethiopia launched the project, which is estimated to be worth about four billion dollars, and aims to build the largest hydroelectric dam in Africa. However, it raises regional tensions, especially with Egypt, which depends on the Nile River to provide about 90% of its irrigation and drinking water needs.

The $4.2 billion project aims to produce more than 5,000 megawatts of electricity, more than twice the electricity produced by Ethiopia.

And official media reported that the dam, located in western Ethiopia and close to the border with Sudan, began generating 375 megawatts of electricity from one of its turbines on Sunday.

The Renaissance Dam is located on the Blue Nile in the Benishangul-Gemuz region, about 30 km from the border with Sudan.

The Blue Nile, which originates in Ethiopia, meets the White Nile in Khartoum to form the Nile River, which crosses Sudan and Egypt and flows into the Mediterranean.

For Egypt, which depends on the Nile River to provide about 97% of its needs for irrigation and drinking water, the dam constitutes an existential threat.

For its part, Sudan hopes that the project will contribute to controlling annual floods, but it fears that its dams will be damaged in the absence of an agreement on the operation of the Renaissance Dam.

Talks held under the auspices of the African Union did not reach a tripartite agreement on the filling and operation of the dam.

Cairo and Khartoum demanded that Addis Ababa stop filling the dam's reservoir until an agreement is reached.

The dam project was launched under former Prime Minister Meles Zenawi, the Tigrayan leader who ruled Ethiopia for more than two decades until his death in 2012. Government employees helped launch the project by providing a monthly stipend the year before it was launched, and the government has since issued dam bonds targeting the Ethiopians inside and outside the country.

But officials credited Abiy with reviving the project, after mismanagement, they said, repeatedly delayed its construction.

"Our country has lost a lot because of its repeated delays, especially in financial terms," ​​said project manager Kefle Horo.

First Lady Zinash Tiacho was among the people who attended yesterday's ceremony, along with the presidents of the House of Representatives, the Supreme Court, regional presidents and ministers.

The filling phase of the huge dam reservoir began in 2020, and Ethiopia announced in July of that year that it had reached the goal of mobilizing 4.9 billion cubic meters.

The total capacity of the reservoir is 74 billion cubic meters of water, and the goal in 2021 was to add 13.5 billion.

And last July, Ethiopia announced that it had reached that goal, which means that it would contain enough water to start producing energy, although some experts doubted that.