In light of a late statement from the Egyptian Foreign Ministry, a state of controversy arose in Egypt after the Ethiopian Prime Minister announced the start of electricity production from the Renaissance Dam that Ethiopia is building on the Nile River, amid reservations from Egypt and Sudan. 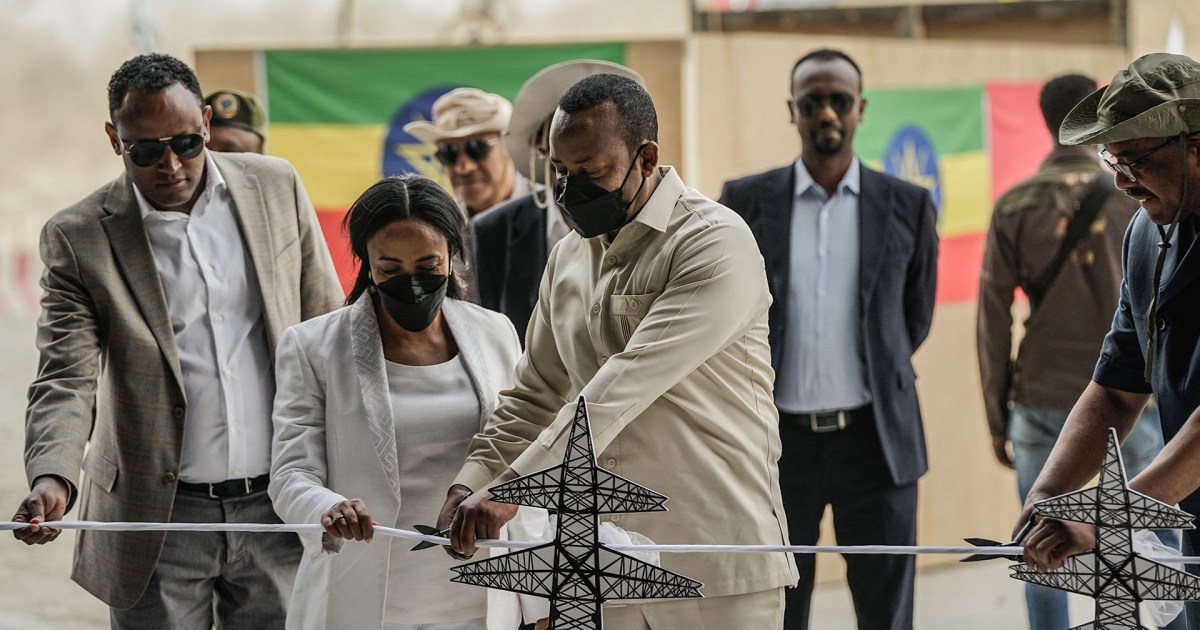 In the absence of an official government response, with the exception of a few lines of statement posted on the Egyptian Foreign Ministry's page hours after the event;

A state of controversy arose in Egypt after Ethiopian Prime Minister Abiy Ahmed officially launched the process of producing electricity from the Renaissance Dam that Ethiopia is building on the Nile River, amid reservations on the part of the downstream countries Egypt and Sudan.

Abiy Ahmed and high-ranking officials toured the power plant, pressing a set of buttons on an electronic screen, a move officials said launched the production process, according to Agence France-Presse.

The downstream countries (Egypt and Sudan) fear the dam’s repercussions on their water security, while Addis Ababa stresses its importance for generating electricity and achieving development.

Three historic victories, in #Ethiopia despite the great challenges, 1 a victory on the fighting fronts, 2 a victory at the diplomatic level, and then a victory in its national project, #GERD.

Congratulations to all of you.# Al-Nahda_dam #Ethiopia #Sudan #Egypt pic.twitter.com/A9lJhZZRQM

From my photography.. #Now the official inauguration of the first phase of electric power production from the #Nahda_dam is taking place in

the presence of the Prime Minister of #Ethiopia Abi Ahmed, regional governors and international media pic.twitter.com/Hlu96vMZXB

Contrary to the brief and late Foreign Ministry statement, former Egyptian Minister of Irrigation Mohamed Nasr Allam said that his country does not mind using the Ethiopian dam to generate electricity, but without harming Egypt and Sudan’s share of the Nile water, warning against the “heightening” of the middle passage, and filling more water behind the dam. , according to him.

In an interview with the local "Sada Al-Balad" channel, Allam claimed that there was poor planning by the Ethiopians in generating electricity and storing water behind the dam, pointing to technical errors in the turbines, noting that the first filling was sufficient to generate electricity, but the Ethiopians wasted two whole years waiting Electricity generation.

Professor of Hydrogeology at Cairo University, Abbas Sharaki, said that Ethiopia's initiative to start generating electricity from the Renaissance Dam is a new unilateral act that is added to the first and second storage steps.

Sharaki added - during a telephone interview with "Echo of the Country" channel yesterday, Saturday evening - that the decision to generate electricity and the third storage will technically benefit Egypt, by completely emptying the second storage, he said.

Following the Ethiopian announcement, Sharaki questioned the validity of Ethiopia's production of electricity from the dam, and said - in a post on Facebook - that despite the official opening, he did not see any picture or video confirming the exit of water as a result of the operation to the collection basin, which should appear in the form of a fountain, as he described .

Through the “Renaissance Dam” hashtag, social networking sites have turned into an arena of widespread controversy over Ethiopia’s start of electricity production from the dam, between the congratulations of the Ethiopian people and anger at the official calm, and a call not to be drawn into the labels of communication sites.

A large number of Egyptians expressed their anger at the absence of official reactions to the issue of the Renaissance Dam, and the absence of Egyptian influence since the UN Security Council statement last year, which allowed Ethiopia to complete the dam work and threaten Egyptian water security.

Some of them questioned the feasibility of Egyptian President Abdel Fattah El-Sisi’s statements in which he said that the Nile waters are a red line, at a time when Ethiopia started producing electricity and is preparing for the third filling, while others accused the regime in Egypt of deliberately concealing the reality of the failure to manage the file of the Renaissance Dam crisis through Fabricating "fake trends" through the media to occupy the Egyptian public opinion.

On the other hand, a number of the pioneers of the communication sites congratulated Ethiopia on its success in reaching this stage despite all the obstacles.

Imagine the oppression that #Samh_Shukry will feel when the Ethiopian Minister Al-Aker Al-Kisher tells him that this coffee was settled with the energy generated by the Renaissance Dam, despite your Excellency's nose, after the approval of your president

Pray for the chosen prophet

📌 Ethiopia celebrates the generation of electricity

from the Renaissance Dam,

and in Egypt Al-Biyada trampled the tongues of the parliament, the security and the Samsung media loyalists

, and none of them said where is the red line? Where is the military option?

But where is Egypt, history and geography, from what Abi Ahmed does despite the civil war and conflicts?# Al-Nahda Dam# Egyptian_Army pic.twitter.com/PB5xmGopgV

Certainly the intelligence is the one who directs the "media professionals" and opinion makers and influences public opinion.

It is certain that #Ibrahim_Essa and those like him are tools that are used to occupy public opinion;

And this, of course, while exaggerating any trivial or abnormal incident in society,

To forget the main topics and the disappointment of the system in it, like this #Renaissance Dam

Don't let your anger at the words of the bad man, Ibrahim Issa, make you forget the biggest calamity on Egypt, the two past days, and those who are trying to distract you from it:

Abi Ahmed declared it frankly: We will not leave Egypt and Sudan for thirst and hunger!!

Whoever has the grants also owns the ban!!

This is how Egypt was humiliated and its attainment became captive to what Ethiopia decided, so congratulations to us for what we have become and for the future generations to forgive us. Unfortunately, I say: We do not deserve better than what we are in until we change.

And the Renaissance Dam is contemplated and not aware of cracks or technical defects. It does not collapse alone or in an earthquake zone. On the contrary, the earthquake is repeated for us a lot this year, and my father Ahmed does not want Egypt to be hit to justify his failure, or anything you know about the media that numbs peoples how and makes them accept what the regimes want

= Don't worry about yourself.

I hope that instead of teaching people the hieroglyphic language,

teach them the Ethiopian language

I do not understand the importance of the news that Ethiopia started producing electricity from the #Nahda_dam, I hope they were building it, why are we not crazy and we are mad for the waste, and we are supposed to bless them and thank them for the water that arrives here without an agreement because after the construction of the dam the old agreement is gone and there is no agreement so good so far

With the presence of Egyptian red lines, greed, intransigence and shuttle flights that reached the Security Council and before it the so-called League of Arab States, as well as the maneuvers of the falsely called (the protectors of the Nile), Abi Ahmed cuts the tape, and presses the button, officially announcing the start of generating electricity from the Renaissance Dam.

This is historical news for Ethiopia and for researchers of water and politics. #Ethiopia #Renaissance Dam https://t.co/yW8nReY6h5

The Egyptian Foreign Ministry comments on the Ethiopian announcement of the start of the operation of the dam that the Ethiopian side is violating its commitments... You mean the ambiguous oath of Abi Ahmed!

Say, by God, by God, what is harmful to Egypt's water interests!

What are you doing and Ethiopia is looking at,, Who are you looking forward to, our perseverance!