Today, the Israeli army admitted that its forces had failed to intercept the drone that crossed the border from Lebanon, and that it had lost contact with it, and Tel Aviv later added that the plane had returned to Lebanon. 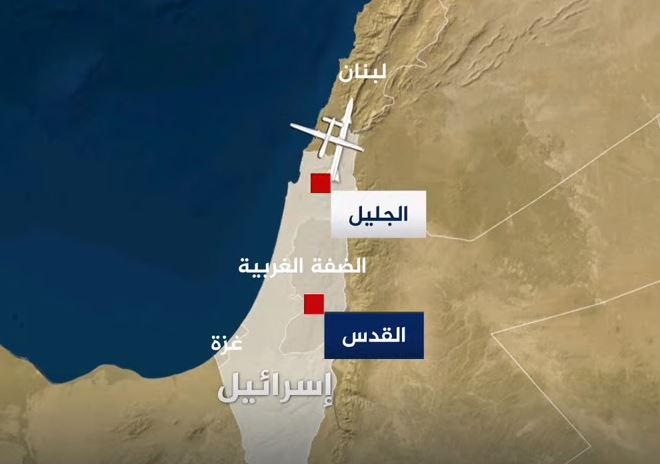 Today, Friday, the Israeli army admitted that its forces had failed to intercept the drone that crossed the border from Lebanon, and that it had lost contact with it, before Tel Aviv added that the drone had returned to Lebanon.

The Israeli army had stated, in a previous statement today, that it had spotted a drone that penetrated the border, and that Iron Dome had fired several missiles to intercept it after it had breached the border near the "Rosh Yabnya" area in the Hula Plain in the Upper Galilee.

The Israeli army added that the drone is not armed, and it appears that Hezbollah launched it with the aim of collecting information, according to the statement, which added that warplanes and helicopters were called in to patrol after the incident.

The Israeli army said that sirens sounded in the Galilee after the launch of interceptor missiles following the infiltration of a small enemy drone from Lebanon into the Galilee region.

Citizens of the Safad area in the Galilee reported that they heard explosions, after hearing the sirens, and that they had to enter shelters.

Reuters reported that there were no reports of injuries or damage.

And Israeli media sources quoted an Israeli security official, whom they described as senior, as saying that the developments had not yet reached their end, and that the level of alert had been raised along the border with Lebanon.

Yesterday, Thursday, Israel announced that it had shot down two drones that came from Lebanon and the Gaza Strip.

The Secretary-General of the Lebanese Hezbollah, Hassan Nasrallah, said on Wednesday that his party has increased its military capabilities in recent years, and it has thousands of precision missiles and drones, with the ability to manufacture them locally.

Nasrallah explained that the Israeli strikes that prevented the transfer of weapons through Syrian territory from Iran to Lebanon "constituted a threat and an opportunity at the same time, and led to fruitful results."

And Israeli security sources reported last January to the French press agency that the drones that Tel Aviv recently shot down after flying across the border from Lebanon revealed the growing capabilities of aerial reconnaissance that the Iranian-backed Hezbollah has become.

The Israeli army has an air command center near the border with Lebanon, which includes about 20 officers, whose mission is to monitor Hezbollah's drones.

Lebanon and Israel are officially at war. In 2006, Lebanon witnessed a bloody war between Israel and Hezbollah that lasted 33 days, in which 1,200 people were killed in Lebanon, most of them civilians, and 160 Israelis, most of them soldiers.