Moscow publishes a video clip of the withdrawal of some of its forces, and America is talking about the increase in the number of Russian soldiers near Ukraine

Russia said on Thursday that 10 convoys of its forces had left the Crimean peninsula (southern Ukraine), while the United States questioned the withdrawal of Russian forces, saying that Moscow had reinforced its forces near the Ukrainian border. 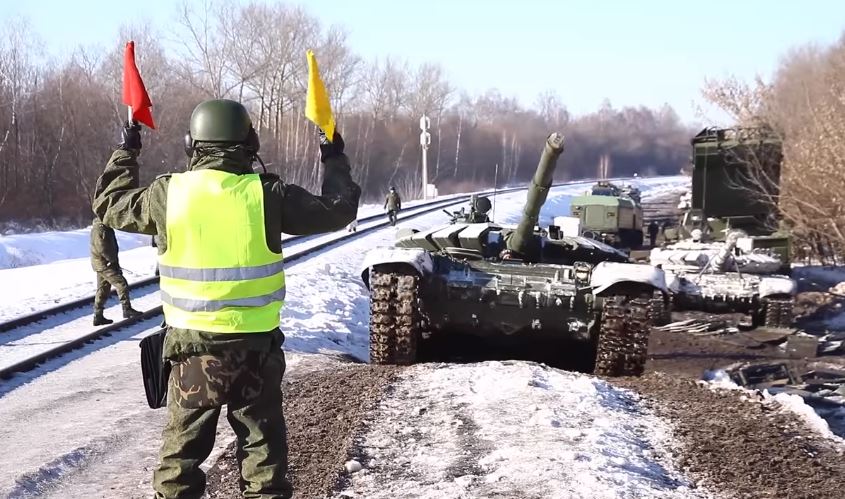 The Russian Defense Ministry said today, Thursday, that about 10 convoys of Russian forces have left the Ukrainian Crimea after participating in the exercises, while the United States questioned Russia's talk of withdrawing its forces, saying that Moscow increased the number of its forces near the Ukrainian border.

The Russian Defense Ministry published a video clip, which it said showed forces and military equipment from its tank force of the Western Military District, returning to their permanent deployment bases after training exercises. The ministry said that tanks and armored vehicles will travel about 1,000 kilometers across the railways.

Moscow said for the first time on Tuesday that it would reduce its military presence in areas near Ukraine, where it has amassed well over 100,000 troops and heavy weapons in the past few weeks, prompting Western fears of an imminent Russian invasion of Ukraine.

The director of Al Jazeera's office in Moscow, Zaur Chug, said that Al Jazeera's sources in the Russian south have monitored the movement of many trains carrying Russian equipment and machinery from the Crimea - which Moscow annexed in 2014 - and from the Rostov region (western Russia) towards the center of the country in the Volga region and the North Caucasus. .

The director of the Al-Jazeera office added that Russia did not withdraw all its forces near the border with Ukraine, as the Russian army has permanent bases in areas such as Kursk, Belgrade, Rostov, Crimea and others.

He stated that on the political level, Moscow had moved from the language of diplomacy to the language of political farce in dealing with successive US warnings of Russia's imminent invasion of Ukraine, and Washington's doubts about Moscow's announcement of withdrawing some of its forces near its western neighbor.

The Russian embassy in Washington called on the United States to abandon what it called self-hypnosis about the inevitability of an invasion of Ukraine, and the embassy called on Washington not to feed what it called the media’s military frenzy regarding Ukraine, and the embassy also called on the US administration to focus on resolving important issues for settling the internal conflict. in Ukraine.

On the other hand, a White House official said that Moscow has strengthened its military presence on the Ukrainian border by deploying 7,000 additional troops, and US State Department spokesman Ned Price said on Wednesday that Washington's concern has not abated about a possible Russian invasion of Ukraine.

The same spokesman stated that his country still sees more Russian forces on the borders, and they are heading to the fighting sites instead of withdrawing.

And the US Secretary of State, Anthony Blinken, said a day earlier that the monitoring showed a movement of the Russian army on the borders of Ukraine, not far from it.

British Defense Secretary Ben Wallace stressed on Wednesday that Russian military exercises near Ukraine do not need strategic weapons or field hospitals, adding that the number of Russian forces is increasing in key areas, and that he sees no evidence of their withdrawal.

The British newspaper, "Telegraph", quoted British Foreign Secretary Liz Truss as saying today, Thursday, that Russian President Vladimir Putin will prolong the Ukrainian crisis for months, warning that if Moscow does not back down, it will pay a heavy price for its strategic interests, including the Russian gas pipeline. To Europe "Nord Stream 2".

On Wednesday, NATO Secretary-General Jens Stoltenberg said in a press statement that Russia is conducting the largest combat military build-up since the Cold War, adding that the alliance is considering redeploying combat forces in Eastern and Central Europe, and redeploying missiles.

The Russian Foreign Ministry accused NATO of militarizing the Black Sea region, and of exploiting the crisis to strengthen its military presence in Eastern Europe.

On Wednesday, Russian Foreign Ministry spokeswoman Maria Zakharova described the alliance's arguments to strengthen its military presence in Eastern Europe - including the deployment of combat groups in Romania - nonsense.

As part of the coordination of Western powers to confront Russian threats, the White House said that US Vice President Kamala Harris will meet tomorrow, Friday, the Secretary-General of NATO and leaders of the Baltic countries, and Biden's deputy will meet tomorrow, Saturday, with Ukrainian President Volodymyr Zelensky, on the sidelines of the Munich Security Conference on Saturday.

The British Foreign Secretary will travel at the end of the week to the Ukrainian capital, Kiev, and then to the Polish capital, Warsaw, before the G7 summit in Germany next Saturday, in order to confirm Washington's support for Ukraine in the face of fears of a Russian invasion.

Kiev asked yesterday evening, Wednesday, the United Nations Security Council to discuss the ratification of the Russian House of Representatives (Duma) on a resolution to submit a proposal to President Putin to recognize the secession of the "Republics of Donetsk and Luhansk" in eastern Ukraine.

In Ukraine, the Kiev authorities asked the United Nations Security Council yesterday evening, Wednesday, to discuss the ratification of the Russian lower house (Duma) of a resolution to submit a proposal to President Putin to recognize the secession of the "Republics of Donetsk and Luhansk" in eastern Ukraine, two regions under the control of separatists fighting Ukrainian forces and enjoying the support of Russia.

The separatists unilaterally declared the secession of Donetsk and Luhansk regions from Ukraine in the spring of 2014.

In a related context, Ukrainian President Zelensky said on Wednesday that his country does not fear anyone and is ready to defend itself against any Russian invasion.

Zelensky's speech came during major maneuvers he attended, during which his country's forces tested anti-tank weapons provided by the West in Rivne (west of the country).

The Ukrainian president then headed east to Mariupol, near the front line with pro-Russian separatists.