Bulgarian MEP Angel Dzhambazki, a member of the far-right Bulgarian National Movement party, starred this Wednesday in Strasbourg in one of the episodes... 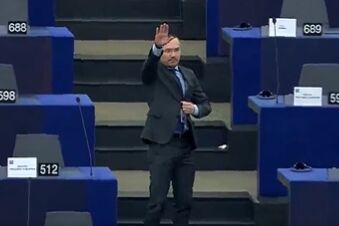 , a member of the extreme right - wing

, was the protagonist this Wednesday in

in one of the most angry and embarrassing episodes of recent years when he left the chamber insulting an Italian colleague at the top of his voice and making a Fascist salute from the stairs.

Dzhambazki, known for his radical opinions, his bad manners or his hatred of NGOs, in addition to being the rapporteur in the Legal Affairs committee that led

's plea , has lost his temper during the debate on the State Mechanism of Law, the instrument at the disposal of the EU to be able to sanction countries that do not respect community norms and values, contemplated in the Treaties, by cutting off European funds.

has ruled on the issue, giving the green light to the European Commission to activate whenever it wants, considering that its provisions are perfectly legal.

And that is why the

debated it, urging the Commission not to delay the start-up any longer, with two countries in the target: Hungary and Poland.

Both, the ones that have been involved in the most clashes with

, had presented two appeals before the CJEU, which today has dismissed them.

Dzhambazki, in agreement with the governments of

, believes that the ruling of the high court "is an abomination" and that "there is not a single sane person who believes that Hungary and Poland do not have a full rule of law", and denounces that "the mechanism is being used as a whip to punish nations that do not like it".

And he has attacked the Italian deputy

), with shouts and insults.

Reprimanded, he has left the hemicycle, turning towards the rostrum and executing a fascist salute.

The gesture has provoked the immediate rejection of the main groups, who have asked President

"He has insulted Sandro and he has gone like this. There is only one word: shame," added

, vice president of the Liberals.

"During today's debate, Dzhambazki gave a Hitler salute in plenary. On behalf of the European People's Party, I condemn this act in the strongest possible terms. It is the opposite of what this Parliament stands for and we call for immediate sanctions," he said. the leader of the popular, the German Manfred Weber.

"When someone confuses a simple gesture with a Nazi salute, it is that we have a problem with

", the deputy defended himself on Twitter, pointing to the 'law', very common on the Internet, which stipulates that if a discussion is extends over time the probability that a comparison appears in which Nazism is mentioned tends to one.

"I apologize if my innocent gesture has insulted someone but we are facing a very serious case of reductio ad absurdum," he assured.

Dzhambazki, a proud nationalist, is known in the chamber for his rants against gay marriage or ethnic minorities, whom he accuses of lobbying.

He has a special obsession with the gypsies, whom he repeatedly attacks, which is why several organizations asked the European Commission to intervene when detecting hate crimes.

And he has a record of attempting to travel with an illegal firearm or driving under the influence of alcohol,

In the European Parliament there are 705 deputies and dozens of political forces.

Every year there is an incident involving extremists and radicals who take advantage of the repercussion to launch their messages.

ContraOpaSpain, on the brink of losing Intel's mega-investment plan of 80,000 million in the EU to Germany and Italy

PoliticsSantiago Abascal 'opens' the 13-F campaign with an act in Madrid with Orban, Morawiecki and Marine Le Pen