What does Xi Jinping care more about than winning a gold medal?

Right now, the Beijing Winter Olympics are in full swing, and China has set off a wave of spectators. On the eve of the opening ceremony, when President Xi Jinping met with IOC President Bach, he talked about his "gold medal concept": "I don't care how many gold medals Chinese athletes win this time, I care more about the motivation and energy it will give us in the future. vitality."   Objecti 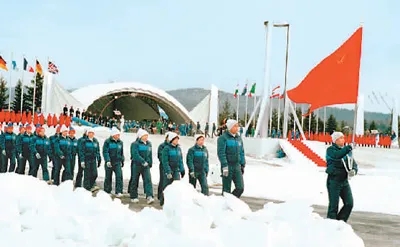 Right now, the Beijing Winter Olympics are in full swing, and China has set off a wave of spectators.

On the eve of the opening ceremony, when President Xi Jinping met with IOC President Bach, he talked about his "gold medal concept": "I don't care how many gold medals Chinese athletes win this time, I care more about the motivation and energy it will give us in the future. vitality."

However, at this Winter Olympics, the Chinese sports delegation has qualified for a total of 194 seats in 104 events, and achieved a "zero breakthrough" in 35 events.

The significance behind this is no less than winning gold and silver in the arena.

During this time, the team has been paying attention to the Winter Olympics. In addition to winning gold and silver, many athletes have been working hard.

For example, in the alpine skiing and downhill competition, Chinese athlete Xu Mingfu crossed the finish line in 36th place and finished the race successfully. This result may not be excellent, but it is the first time that a Chinese name has appeared on the record book of this event.

As netizens said: "Participation is the best start."

The picture shows Chinese player Xu Mingfu in the game.

Whether it is for the country or the athletes, the significance of challenging and breaking through oneself is far more important than winning or losing.

On February 7, 2014, when Xi Jinping visited the Chinese sports delegation participating in the 22nd Winter Olympics in Sochi, Russia, he said: "The most touching thing in major events is not necessarily winning the gold medal, but embodying the Olympic spirit. It is the Chinese people who talk about self-improvement."

Today, when national self-confidence is becoming stronger and stronger, gold medals are no longer the only way for Chinese people to prove themselves.

In China, the audience is looking at the game with an increasingly rational and peaceful attitude - cheering for athletes from all over the world with an attitude of appreciation, even if their own athletes did not win the gold medal, but as long as they worked hard, they would give applause and respect.

For example, in the snowboard men's U-shaped field skills qualifying competition a few days ago, Gao Hongbo, who played with an injury, had to complete the game with low difficulty.

In the face of this optimistic and determined boy, netizens warmly encouraged: "You are the champion in our hearts", "Brave boy is good."

After so many years, the Chinese people's understanding of sports is gradually saying goodbye to the "Gold Medal Theory", and more people understand the Olympic spirit and enjoy the Olympic Games.

In fact, the significance of the Olympic Games is far more than the competition during the event.

The Winter Olympics achieved the goal of "driving 300 million people to participate in ice and snow sports".

In the short film "Future Champion" at the opening ceremony of the Beijing Winter Olympics, the scene of a 1-year-old baby skiing is adorable.

"Ski Babies" can step on snowboards without walking. Behind the "onlooker effect" is the surging ice and snow boom in Chinese society.

According to statistics, since Beijing successfully bid for the Winter Olympics, the number of Chinese residents who have participated in ice and snow sports has reached 346 million.

More and more "cold movements" are "warming up" in China.

On January 25, when meeting with Bach, Xi Jinping said: "As early as when I bid for the Olympics, I proposed that the biggest purpose of China's hosting of the Olympics this time is to drive 300 million people to participate in ice and snow sports."

Bach responded: "China has achieved the goal of more than 300 million people participating in ice and snow sports. This is a great achievement that has never been seen before. It will be a major contribution to the Chinese people and the international Olympic movement by this Winter Olympics."

Hosting the Winter Olympics is not a one-shot deal, and it will become a "silent mountain forest" after it cannot be held.

By 2025, this data is expected to exceed the trillion scale.

For example, Chongli, Hebei, which used to be difficult to travel in winter, has now built 7 large-scale ski resorts. The ice and snow economy has enabled more and more locals to take up "snow rice bowls", opening up a new way to increase income and become rich. .

IOC official Christopher Dolby, who witnessed the preparations for the Beijing Winter Olympics, believes that the Olympic effect can contribute to the host city for 20 years or more.