He called for a relentless war against smugglers.. The King of Jordan visits his soldiers on the border with Syria. What's the story?

King Abdullah - who is the supreme commander of the armed forces - saluted the soldiers serving on the border with Syria, and expressed his confidence in their role in confronting infiltration and smuggling attempts, and saluted the lives of those killed while performing their duty. 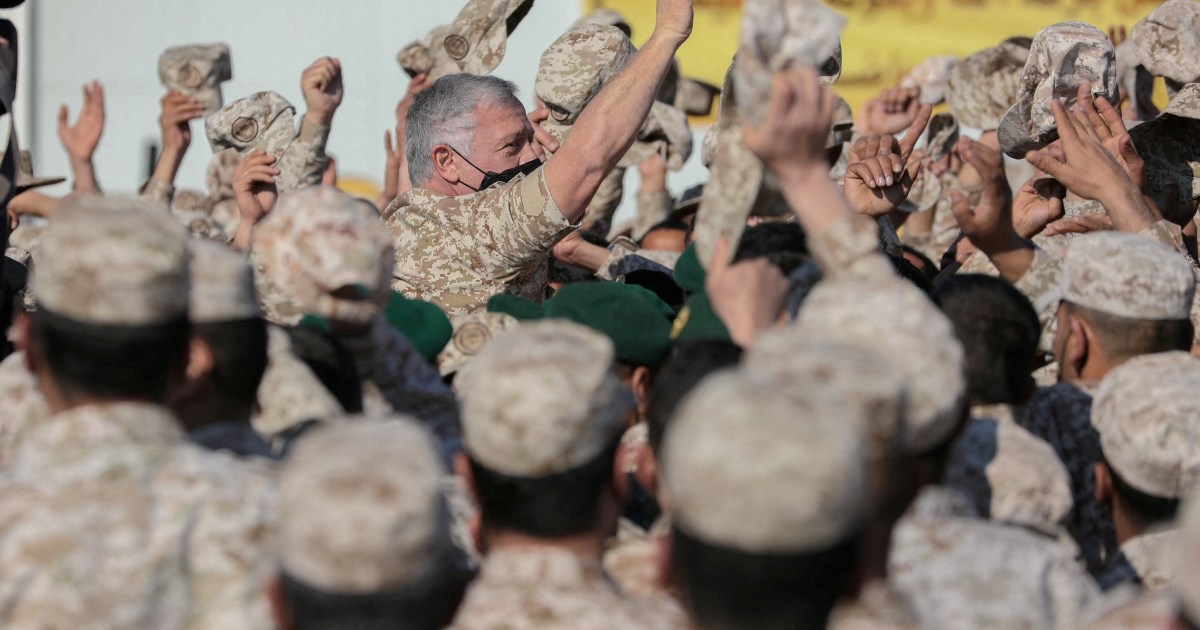 The visit of King Abdullah II of Jordan to the eastern military region on the Jordanian-Syrian border - yesterday, Monday - highlighted the operational and planning measures taken by the Jordanian authorities to combat drug smuggling.

During the visit, King Abdullah - who is the supreme commander of the armed forces - saluted the soldiers serving in the region, and expressed his confidence in their role in confronting infiltration and smuggling attempts, and saluted the lives of those killed while performing their duty.

The king stressed the army’s support for the anti-smuggling forces on the border, and said, “Any clash with you, the chief of staff and the command is with you, to protect you from everything. youths".

The main Jordanian border crossing with Syria - a major regional road through which billions of dollars of trade flows through to countries in the region - was also used to smuggle drugs that are hidden in Syrian trucks on their way to the Gulf market.

The border areas between Jordan and Syria are witnessing an increasing activity in smuggling operations and infiltration attempts, which have increased in the past ten years, in light of the crisis in Jordan's northern neighbor.

The length of the common border between the two countries is about 375 km.

According to military analysts, the smugglers are developing their methods of work and inventing new methods of smuggling, as they are fighting what they describe as a daily war with the Jordanian border guards, which periodically announce the arrest or elimination of smugglers.

United Nations experts and Western diplomats say that the illicit drug trade is used to finance irregular forces loyal to the Syrian regime, born out of the conflict in Syria, which has become the region's main production hub for billions of dollars in trade towards Jordan, Iraq and Europe.

Senior Jordanian officials say they have raised their concerns with the Syrian authorities and Russia, a key ally of Syrian President Bashar al-Assad.

In recent months, the Syrian authorities announced several operations in which large quantities of drugs destined for the Gulf markets were seized, and say they are taking strict measures to prevent the production of Captagon.

According to a statement by the royal palace, since the beginning of 2022, the Jordanian Armed Forces have thwarted the smuggling of 16 million narcotic pills and 17,348 palms of hashish across the border, while 29 smugglers were killed after implementing strict rules of engagement.

The Directorate of Moral Guidance of the Jordanian Armed Forces had previously announced that it had foiled 361 smuggling and infiltration operations across the Jordanian land borders during the past year 2021, in which the army thwarted the smuggling of large quantities of narcotics and prohibited substances.

Quantities of prohibited weapons, ammunition, devices and equipment were seized, and the Royal Engineering Corps disposed of large quantities of various expired munitions, blind munitions, and various explosive materials left over from war, shooting and military exercises in the designated training areas.