3 Key Words for the "Ice and Snow Fever" in the Greater Bay Area: Incentive, Participation, and Integration

China News Service, February 15th (Zhu Yanjing) Stepping on the snow field, stepping on the ice skates, and skating... In the Guangdong-Hong Kong-Macao Greater Bay Area where there is no snow, such ice and snow sports used to be far away for people. Nowadays, being attracted by the Winter Olympics, simulating curling for entertainment, going to the Northeast for training... Now it seems that ice 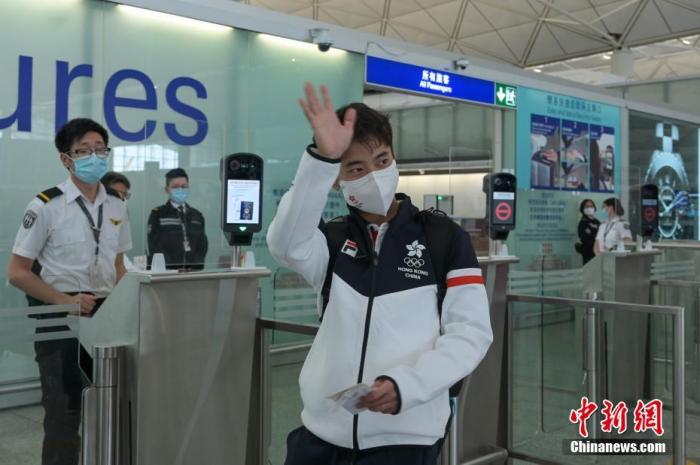 China News Service, February 15th (Zhu Yanjing) Stepping on the snow field, stepping on the ice skates, and skating... In the Guangdong-Hong Kong-Macao Greater Bay Area where there is no snow, such ice and snow sports used to be far away for people.

Nowadays, being attracted by the Winter Olympics, simulating curling for entertainment, going to the Northeast for training... Now it seems that ice and snow sports are not so "cold" in this "hot" soil.

On the 14th, Hong Kong short track speed skater Zhu Dingwen was a guest on China News Network's "Bay Area Youth Talk" column to talk about his understanding of the "ice and snow fever" in the Greater Bay Area.

On January 27, Zhu Dingwen departed for Beijing at Hong Kong International Airport to participate in the 2022 Beijing Winter Olympics.

Back on the evening of February 4th, in the "Bird's Nest" of the National Stadium, Zhu Dingwen entered as the flag bearer of the Hong Kong delegation of China, waving the regional flag vigorously.

At the same time, in front of the big screens in many shopping malls in Hong Kong, there were also many citizens watching the live broadcast of the opening ceremony of the Beijing Winter Olympics.

10 days later, when Zhu Dingwen was asked about the enthusiasm of Hong Kong teenagers for ice and snow sports, he said that through the live broadcast of the Winter Olympics, he could feel that many Hong Kong citizens were gradually becoming interested and appreciative of ice and snow sports.

During the interview, Zhu Dingwen revealed his enthusiasm for promoting ice and snow sports in the Greater Bay Area from time to time.

The picture shows Zhu Dingwen in the game.

Since Beijing joined hands with Zhangjiakou to bid for the 2022 Winter Olympics, the strategy of "Expanding the North, South, West, East and East" and the goal of "300 million people on ice and snow" have been actively promoted, and ice and snow sports and the ice and snow industry have been vigorously promoted and promoted. universal.

In recent years, the Guangdong Ice and Snow Sports Association has held several ice and snow forums to discuss the development experience in the field of winter sports in the south.

As part of the Greater Bay Area, not only in Guangdong, but also in Hong Kong, ice and snow sports are gradually developing.

When talking about ice and snow sports in Hong Kong recently, Fok Qigang mentioned that many younger generations in Hong Kong have started skating, and there are more and more ice hockey teams. Many youth centers simulate curling on land...

In the interview on the 14th, when Zhu Dingwen was asked what he would say to the children who want to become the next "Zhu Dingwen", he expressed his encouragement with the very firm "Come on".

He also sent a message to Hong Kong children who are determined to do ice and snow sports, challenge themselves, surpass themselves, and feel the spirit of sports in it.

The guest interview with Zhu Dingwen was also his coach Sun Dandan.

In recent years, under the leadership of Sun Dandan, the Hong Kong short track speed skating team has carried out close cooperation training with the mainland, especially the Greater Bay Area.

She describes her experience teaching in Hong Kong as "integration".

In her opinion, the training environment in Hong Kong cannot be compared with that of the mainland. She is more of a combination of training methods from the two places, including using weekend vacations to go to the mainland for short-term training camps.

Sun Dandan looked forward with great confidence and said, "Maybe there will be people from our Greater Bay Area who will stand on the top podium of the Olympics in the future."

Zhu Dingwen also revealed that some short track speed skating experience classes will be held in the Greater Bay Area in early March.

He just announced the speed skating experience class on Weibo on the 13th, and dozens of people have joined the WeChat group.

He hopes to bring sports-talented teenagers to ice and snow sports.

"I hope that in the next few Olympic Games, in addition to the Northeastern dialect, our national team can also have Cantonese or some other dialects." Zhu Dingwen said with a smile.