India.. Girls forced to remove headscarves and a state reopens some schools after demonstrations

A state in southern India reopened some schools today, Monday, after they were closed after demonstrations erupted last week, in protest against the ban on female students from wearing the headscarf in classes. 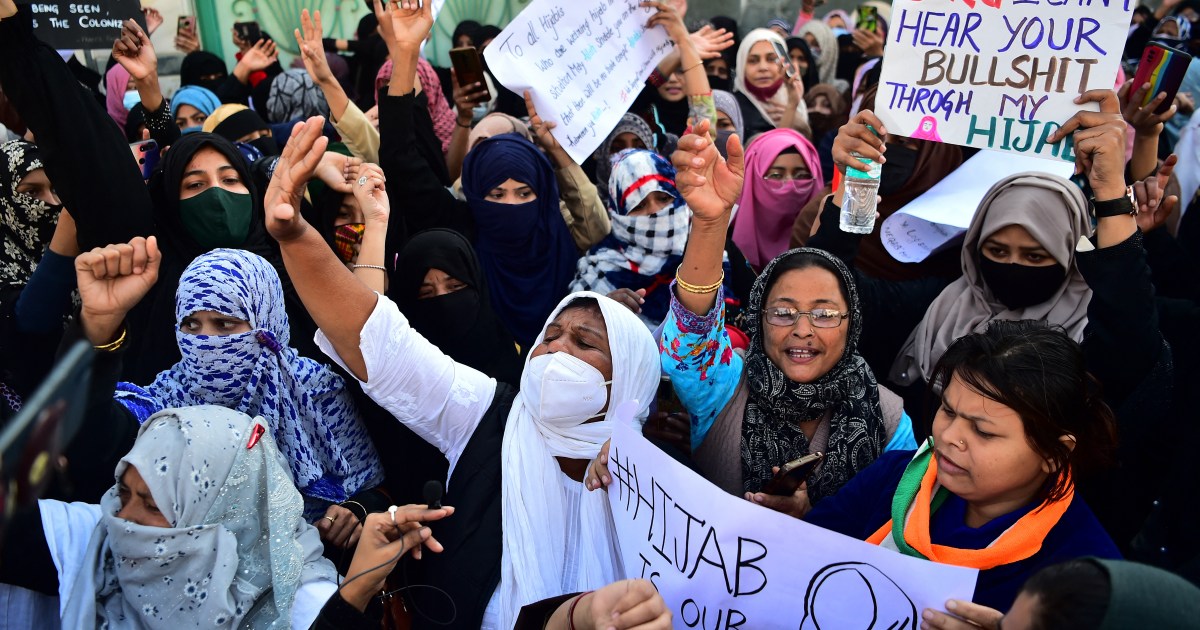 A state in southern India reopened some schools today, Monday, after they were closed after demonstrations erupted last week, in protest against the ban on female students from wearing the headscarf in classes.

And this issue, which is widely seen by the Muslim minority in India, has exploded as an attempt to marginalize it by the authorities in a Hindu-dominated country, at a time when the Bharatiya Janata Party - led by Prime Minister Narendra Modi - is preparing to contest elections in key states.

Police stood guard as female students in pink school uniforms, including about a dozen students wearing headscarves, entered a government girls' school, where the crisis sparked in the Udupi district of Karnataka state, about 400 km from Bangalore, the capital of India's technology industry.

The authorities banned gatherings of more than 5 people within 200 meters of educational institutions in the area, which resumed studies from primary to secondary levels, although higher levels and colleges continued to be closed.

The move came after a state court ordered students not to wear any clothing with religious connotations, whether saffron shawls traditionally worn by Hindus, scarves or headscarves inside the classroom, until further notice.

The issue came to light in the wake of protests that erupted last week, after some schools refused entry to students who wore religious clothing, which is in violation of a government order issued on February 5 regarding school uniforms.

The ruling party derives its support mainly from the Hindu majority, which constitutes about 80% of India's population of approximately 1.4 billion people, while Muslims represent about 13%.

Aisha Imtiaz, an Indian Muslim student at Udupi, said she was humiliated when she was asked to remove her hijab before entering class.

She added - to Reuters at the weekend - that she felt that her faith "was questionable, and was insulted by a place that I considered an educational temple."

Pradeep Korodikar, an official in the coastal Udupi district, told reporters that the authorities will wait for further orders from the court or the government, to reopen all classes.

Forced to take off the veil

In a related context, activists on social media in India circulated a video clip of Muslim students and workers in a school in the Indian state of Karnataka, forcing them to take off their headscarves, so that they could enter through the school gate, and their features appear deep sadness.

This is humiliating a community, this is what happens when Fundamental Rights are suspended, where is my https://t.co/Mr8PkaUJi7 this not an attempt to make us Z Category citizens

Power is not eternal BJP must remember

Mandya : Students wearing Burqa / #Hijab being asked to remove it & then enter the school campus.

Some parents requesting that the students be allowed to wear it till they enter classrooms atleast.

Students of Rotary educational society school Mandya remove hijab when they were asked to, to attend classes.

Most schools have enforced the ban on religious clothing earlier ordered by the Karnataka HC.

The videos show a woman in a sari (a traditional dress) - who appears to be a school official - giving instructions to girls and parents.

These practices come in the wake of the headscarf ban crisis in schools in the Indian state of Karnataka.

The Indian activist and journalist, Donita Joss, condemned these scenes, saying, "Even the metro, airports and shopping centers have a separate room for examining and searching women, and the school forces them to take off their headscarves in the middle of the road. Why all this insult?! We should not wait for any sympathy from the government, but Is there not a part of the dignity left for teachers and the school administration?!”

While Indian teacher and activist Katyusha said that "forcing women and girls to remove a piece of their clothing in public is a violent crime against them, stop the systematic oppression of women in India."