In New York, sustainable fashion, the creed of the little thumbs of Fashion Week

During the pandemic, Emma Gage lost her fashion job. Two years later, she founded her brand, Melke, a little thumb that made its debut at New York Fashion Week by betting on a… 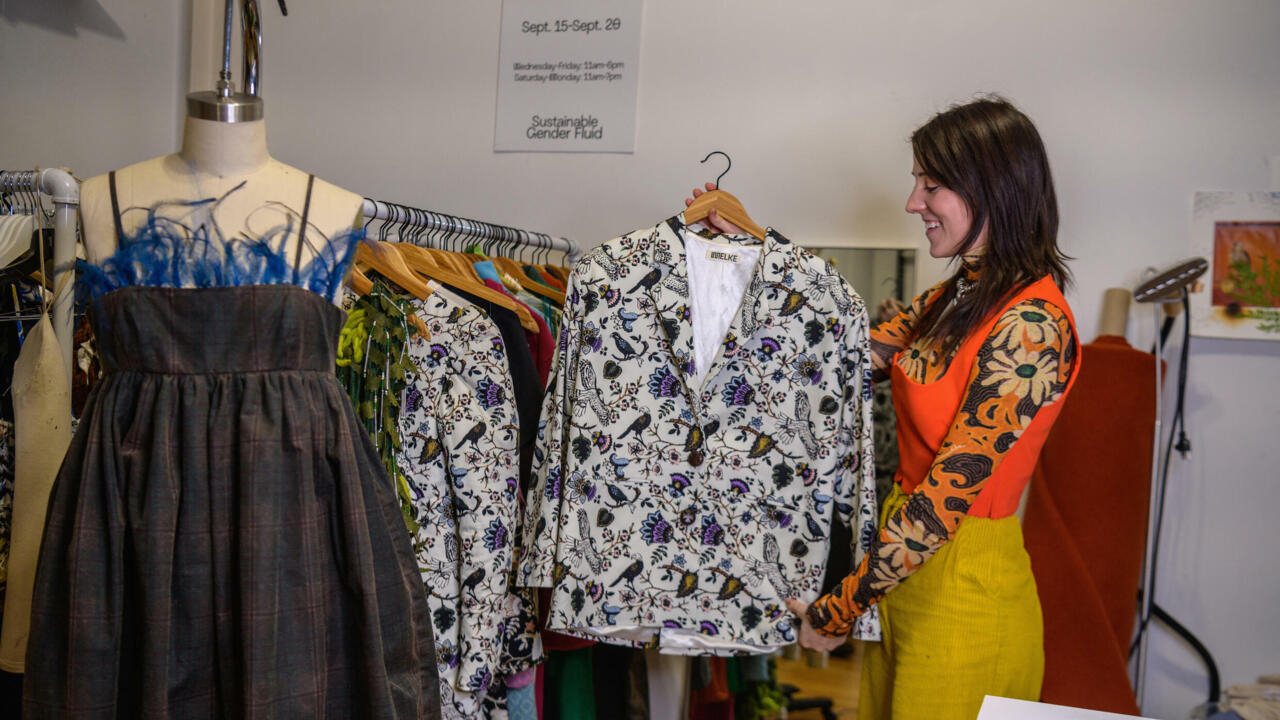 The young woman, originally from Minnesota, is not the first or the only one to bet on this niche, while the fashion industry is singled out for its impact on the environment.

"Now (...) everyone wants to have something to say about it," another young designer, 23-year-old Olivia Cheng, told AFP.

Her brand, Dauphinette, which is known for its jewelry and outfits made from real flowers, was featured on the official Fashion Week calendar for the first time on Sunday, at a restaurant in Chinatown.

Hemp, organic cotton, recycled fabrics, Emma Gage, 26, highlights materials that are not very harmful to the environment and her concern to buy from companies that respect human and social rights, listed on her website.

Pullovers made from recycled fabrics in the studio of American designer Emma Gage, on February 4, 2022, before New York Fashion Week, where her brand Melke appears for the first time on the official calendar ANGELA WEISS AFP

But "I will never say that everything is 100% durable and that everything is perfect, because that's a lie", she warns, from her small studio in the Bushwick district of Brooklyn, a meeting place for New York artists, like the murals that invade the streets.

Not yet zero plastic

Thus, "zero plastic" remains a goal for the moment, because synthetic materials can still slip into recycled fabrics, she explains.

American designer Emma Gage, 26, in her Brooklyn studio on February 4, 2022, ahead of New York Fashion Week, where her brand Melke appears on the official calendar for the first time ANGELA WEISS AFP

These limits are an additional argument for making "clothes that last and are made to be worn for a long time".

And don't spoil anything, like these bags made from fabric scraps.

Far from voluminous and sophisticated evening dresses, one of her favorite models is a simple sweater, which returns to each collection, with embroidered motifs of flowers, fish, and now sheep.

The sobriety it claims does not prevent it from being creative and sharp.

Her second collection, inspired by Anne Carson's "The Autobiography of Red", gives pride of place to this color, in often dark tones, with lots of fringing reminiscent of lava flows.

For her fall-winter 2022 collection, presented on Tuesday, she wanted to restore the memories of a trip to an Irish medieval castle and her discovery of falconry, "symbiosis between two predators, man and bird".

- At the Metropolitan Museum of Art -

As for Olivia Cheng, her presentation on Sunday played on the codes of the masculine and feminine genders and still relied on old clothes and floral materials, preserved thanks to a resin that she promises is non-toxic.

But she also ventured on strange experiments, like this set from ginkgo nuts or this dress studded with beetle wings, which she specifies that "they were not killed for that".

While they favor local suppliers, neither of the two designers refrains from sourcing from the other side of the world.

The dilemma of more affordable fashion also arises for her brand, which sells to order.

"I need other people to buy what I'm buying so that prices go down," she says.

And to add that immediately, a question of overproduction will arise.

She tries to solve part of the problem with a varied line of products, which goes down to the t-shirt at 75 dollars.

For her part, Olivia Cheng relies on her fruit and flower jewelry, some for less than 50 dollars.

"For me, it's central to remember what mission we started with and how we can continue this story, without being trapped by a kind of illusion of grandeur", explains this daughter of Chinese immigrants, whose two dresses are already shown at the Metropolitan Museum of Art (MET) in New York, in the exhibition "In America: a lexicon of fashion".