The French media recently highlighted the city of Roubaix, in the north of the country, and said that the small city had become a gathering place for militants. "Afghanistan is only two hours away from Paris," one commentator said, after the broadcast of a TV documentary that portrayed the city and its right-wing mayor as being under siege. 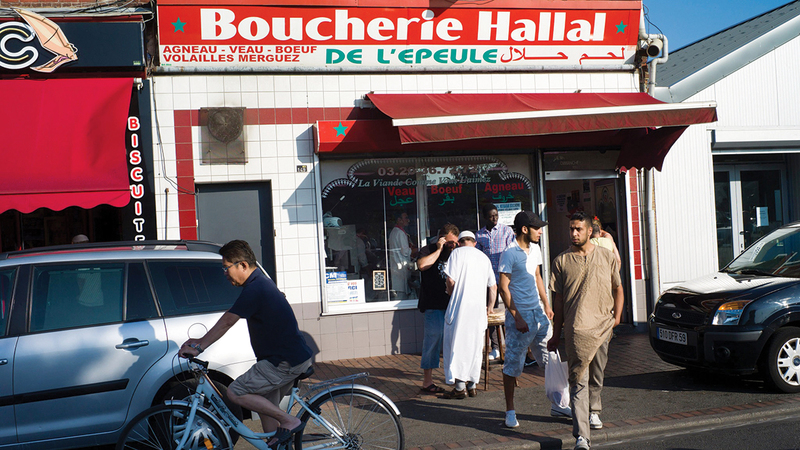 The French media recently highlighted the city of Roubaix, in the north of the country, and said that the small city had become a gathering place for militants.

"Afghanistan is only two hours from Paris," said one commentator, after the broadcast of a television documentary that portrayed the city and its right-wing mayor as under the increasing control of radicalism.

"Why hit a town when you're already on the ground?" said Thierry Lefevre, 58, a wine merchant.

The French merchant explained that he lived and worked in the city, located near Lille, all his life, adding, "When I see it, it makes my blood boil."

His shop is located in the middle of Llannoy, a street the controversial TV report focused on.

In the same place, journalists from the “Forbidden Zone” documentary program, which was broadcast on the private channel “M6”, secretly filmed, inside a store that sells unidentified dolls, Muslims “who believe that the facial features on the toys are anti-Islamic.”

Another store displayed a book that included a reference to newly married Muslims, that women's obedience to their husbands is obligatory.

Another merchant sells a book of fatwas for women, which deals with the punishment of stoning.

And appeared in the documentary film groups of veiled women, the film insisted on saying that their scenes were rare five years ago, in front of a chain of butchers and kebab shops that sell halal meat.

The film highlighted an association that the local council gave about 65,000 euros to help educate poor students, but which was later said to have been used to pay for "Islamic education" instead.

The street, in the city of Roubaix, also includes a restaurant with dining booths in which women can sit without the men seeing them, in order to preserve privacy.

Amine El Behi, 26, a Muslim lawyer in Roubaix who appeared on the programme, insisted that Lannois Street epitomized the perilous slide into fundamentalism;

“Five years ago, people got mixed up,” he said.

And this change, this transformation in society is imminent,” he continued, “in other words, if we do nothing, this harmony will be lost.”

Since the report was broadcast, the lawyer and broadcaster, Ofili Meunier, has received several death threats and is currently under police protection.

With the presidential election just over two months away, and the explosive issues of Muslims and immigration high on the agenda, the candidates took advantage of this controversy.

The far-right candidate, Eric Zemmour, claims that France is in the midst of a "major replacement" of its indigenous population.

While the documentary showed that parts of the country have become "totalitarian" like Afghanistan, which is controlled by the "Taliban".

In this context, Lefevre said, "It's funny how they forgot (in the report) to mention a wine cellar that serves alcohol and pork." The French national runs the wine cellar, which opened in 1986.

There is no denying that the street has seen better days.

Once upon a time, the streets of Roubaix were the busiest and teeming with shoppers, but this prosperity declined with the decline in wealth that hit the city.

Since it was among the richest cities in France, at the turn of the last century, thanks to a burgeoning textile empire;

Roubaix faltered in the 1970s and was officially named the "poorest city in France" in a 2014 survey.

About 44% of the population lives below the poverty line, and no more than 20% go to vote in the elections.

But a slew of companies have also emerged, including OVH, a global IT infrastructure company, which has transformed the city's former textile factories into data centers.

Roubaix has long been a multicultural city, where waves of Polish, Portuguese and Italian immigrants melted before a wave of North African workers.

Today, about 40% of the population is believed to be Muslim.

This led to the establishment of mosques, restaurants, and shops to cater to the growing population.

Among these stores is a store that was the focus of the documentary.

The owner of the shop, Samir Mazin, 32, played a voice message in front of the Telegraph reporter, threatening he had just received on his phone.

The message reads, "Good evening, I am a normal Frenchman.

We will take you away.

We won't let you spoil us.

Good afternoon,” the message continues, “I think my number will appear on your phone, but I’m not worried about that.”

"I closed my shop for a few days because, frankly, I'm afraid," Muzain said.

“No one should be threatened;

Not journalists, lawyers, shopkeepers, violence solves nothing.” The young Frenchman says, "I love laughter and jokes, but now I am portrayed as a dangerous extremist.

I respect French laws and do not believe in imposing Sharia.

The main problems here are garbage collection, drug dealers, and the parking crisis, not extremism!”

Pascal Delmas, 40, who runs an antiques store with his Chinese wife, Xiaoping, 32, said he could testify for the benefit of the shopkeepers focused on in the film, describing them as friends, who were active members of his group. To promote his merchandise in the United States.

"I haven't seen any evidence of extremism here," Delmas added, "but we have many other problems."

A few meters down the street, Dominic Hutt runs the local shooting club, and many of its 400 members are local police officers.

"The real disease here is drug trafficking and poverty," said Hut. "This is not Afghanistan or Molenbeek (Belgium Quarter), and it's more about young people who may not feel out of place: Muslims without being Muslim, French without being French, hate Severe police.

One of the off-duty local policemen complained that his men had arrested local youths involved in drugs, to be released later, without prosecution.

The police officer did not confirm that there is a link between religious extremism and deviation.

"Everything in this report is true," he said, adding, "Religiosity is present here, but not only in (Roubaix), the same applies to the south of Lille, the suburbs of Paris, and many major cities."

The policeman, who preferred not to be named, said he is a supporter of far-right Eric Zemmour, who is due to hold a mass rally in nearby Lille in the coming days.

Delmas dismissed such talk as nonsense and unhealthy, saying: "We live very well together in (Roubaix), and there is a huge amount of diversity - about 100 nationalities - and many churches, synagogues, mosques, and things are fine."

"But some people don't like the fact that white French, North Africans, and others live happily side by side," he added.

They would rather immerse themselves in the past than look to the future.”

• Roubaix stumbled in the seventies, due to the emergence of cheaper marine factories, and was officially crowned the "poorest city in France" in the 2014 survey.

• 40% of the population of "Roubaix", currently, are Muslims, which led to the establishment of mosques, restaurants and shops to meet the needs of the growing population.

• The right-wing candidate, Eric Zemmour, claims that France is in the midst of a “great replacement” of its indigenous population.

While the documentary showed that parts of the country had become "totalitarian" like Afghanistan.

• Roubaix has always been a multicultural city, in which waves of Polish, Portuguese and Italian immigrants fused, before a wave of North African workers.