The sanctions against the Ukrainian TV channel NASH, introduced by Vladimir Zelensky, are aimed at cleaning up the information space, experts say. At the same time, in 2021, 112 Ukraine, ZIK and NewsOne TV channels, which criticized the policies of the Ukrainian leader, suffered due to restrictive measures. All these media were excluded from the broadcast schedule. The founder of the NASH TV channel, opposition politician Yevgeny Muraev, declared the illegality of the actions of the Ukrainian authorities. According to political scientists, the West will once again ignore the violations of the law and the principles of freedom of speech. 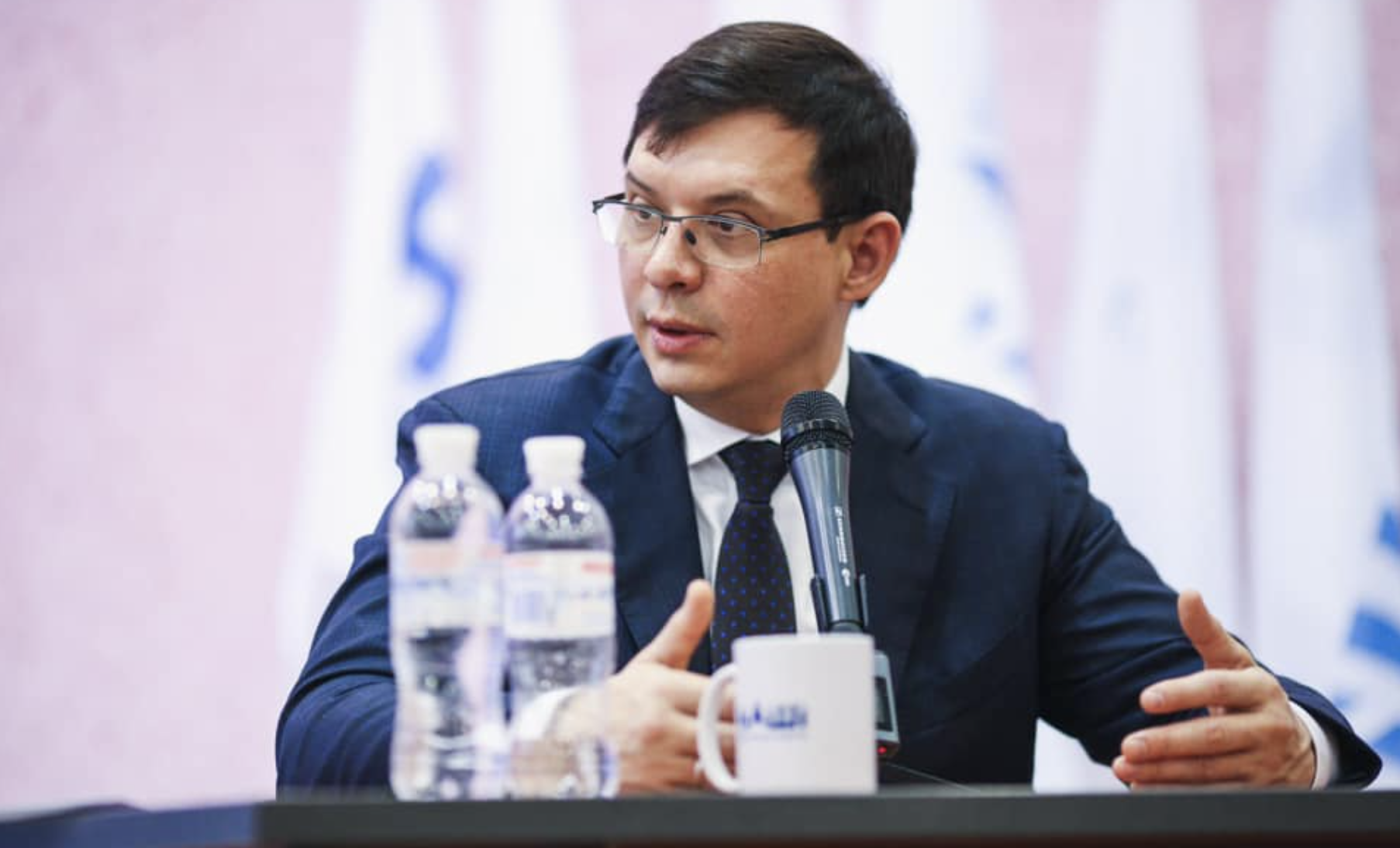 The Ukrainian authorities have imposed sanctions against the NASH TV channel, founded by the opposition politician, leader of the Nashi party, former member of the Verkhovna Rada Yevgeny Muraev.

In practice, this means the exclusion of the media from the country's television network.

The corresponding decision was made on the evening of February 11 at a visiting meeting of the National Security and Defense Council (NSDC) of Ukraine in Kharkiv.

Later, President of Ukraine Volodymyr Zelensky signed Decree No. 52/2022, which put the NSDC resolution into effect.

“Introduce the decision of the National Security and Defense Council of Ukraine dated February 11, 2022 “On the application of personal special economic and other restrictive measures (sanctions),” the decree of the head of state says.

Currently, "OUR" is disconnected from the satellite, cable networks and all digital platforms.

On February 11, during a press briefing, NSDC Secretary Alexei Danilov said that the sanctions against NASH would be in effect for five years.

From the confused statements of the official it follows that the authorities had claims to the ownership structure of the TV channel.

“The uterine structure, as far as I understand, which is located in Cyprus, I don’t know whether you know or not that you are partly Cypriots ...” Danilov tried to explain, answering the question of the NASH correspondent, for that sanctions have been imposed.

It should be noted that the NSDC restrictions were introduced against several legal entities at once: Nasha Praga LLC (Maxi-TV), Nash 24 LLC, Nash 365 LLC (Nash TV channel).

According to the National Security and Defense Council, this firm is the owner of the above organizations.

On his Facebook page, Yevgeny Muraev denied the information of the National Security and Defense Council that Ukrainian legal entities belong to Demosena Investments Ltd.

According to him, the true owners of the TV channel are members of its labor collective.

“Companies that have licenses have nothing to do with Cyprus.

These are purely Ukrainian companies with founders who are employees of the channel,” Muraev wrote.

“I didn’t fan the military hysteria”

Recall that a year ago, under the pretext of fighting the propaganda of the “aggressor country”, the Kiev authorities imposed sanctions against the TV channels 112 Ukraine, ZIK and NewsOne.

Later, under the same pretext, restrictive measures were introduced against the publication "STRANA.ua" and the media resources of the opposition blogger Anatoly Shariy.

According to experts interviewed by RT, NASH remained the last TV channel in Ukraine that promoted an agenda close to the southeastern regions of the country.

In addition, the channel constantly broadcast the opinions of politicians, including Muraev himself, who advocated the implementation of the Minsk agreements and the normalization of relations with the Russian Federation.

Recall that a year ago, in February 2021, Zelensky claimed that he did not plan to close NASH.

Then the President of Ukraine said that only media that, according to the authorities, are financed by Russia, are subject to sanctions.

In an interview with RT, Ruslan Bortnik, director of the Institute for Policy Analysis and Management, believes that the Kiev authorities had complaints about the information picture broadcast by NASH.

So, at the end of last year, the National Council of Ukraine on Television and Radio Broadcasting conducted an unscheduled inspection of the channel.

During the audit, this state body decided to go to court with a lawsuit to annul the license of "OUR" because of the statements on the air of the TV channel of the ex-deputy of the Verkhovna Rada from the Party of Regions Elena Bondarenko.

According to the National Council, the politician incited hostility towards the Ukrainian-speaking population of the country and formed a negative image of Ukraine and Ukrainians in the eyes of the world community.

At the same time, as the National Council claimed, the program was then broadcast "without editorial moderation."

The “culprit” herself on the air of “OUR” called the sanctions of the National Security and Defense Council “censorship” and “dictatorship”.

Bondarenko urged to support the TV channel with views and subscriptions on the Internet.

According to Bortnik, it is not normal that the media should be responsible for the statements of the guests on the air.

If the authorities have claims, then the proceedings should concern the speakers, not the TV channel.

“In democratic countries, responsibility should always be individual, not collective.

In my opinion, in fact, “OUR” suffered because it was not a mouthpiece of patriotism, did not enjoy the support (radical. -

) of the street, Western partners, and was a platform for the dissemination of statements by opposition politicians, ”Bortnik emphasized.

The founder of the TV channel believes that NASH became a victim of sanctions precisely because of the promotion of an adequate agenda.

The ex-deputy stressed that the authorities cannot have legal claims against the media, since he has a transparent ownership structure and no foreign funding.

“This is an absolutely illegal decision, absolutely without any basis, and this is the beginning of the construction of an authoritarian regime.

I understand that the information policy of the Nash TV channel did not suit the authorities.

This is the only channel that did not inflate military hysteria, advocated peace in the country, and this, apparently, does not fit into modern realities, ”Muraev said.

From the point of view of the ex-deputy, Zelensky is pursuing a dictatorial policy, and the sanctions against the NASH TV channel are a crime for which the President of Ukraine will have to answer.

Commenting on the situation with the legality of the actions of the National Security and Defense Council and the president, Ukrainian political scientist Oleksandr Semchenko drew attention to the fact that the Constitution of Ukraine does not allow the authorities to impose any sanctions against citizens and organizations of the country.

Nevertheless, in his decree, Zelensky refers to the 107th article of the country's Constitution.

But it regulates the activities of the National Security and Defense Council and does not stipulate the issue of restrictive measures.

“In accordance with the Constitution, the president does not have the authority to stop broadcasting TV channels.

To do this, there are other bodies that can make such decisions with the participation of the court.

The National Security and Defense Council is just an advisory institution.

However, the main responsibility lies precisely with Zelensky, who, by his decree, put into effect a completely illegal decision of the National Security and Defense Council, ”Semchenko explained.

According to the political scientist, the main reason for the introduction of restrictions on the NASH TV channel is the broadcast of ideological narratives that do not suit Zelensky and his entourage.

“Of course, NASH is not the only channel that can be attributed to the camp of the opposition media.

For example, there are channels "Direct" or "Fifth", owned by Petro Poroshenko.

However, it is difficult to call the criticism that they pour out adequate, due to the endless stream of obscurantism, ”Semchenko emphasized.

According to experts, despite the illegality of imposing sanctions against the NASH channel, the authorities of Western states will not criticize Kiev for violating the law and the principles of freedom of speech, which they nominally defend.

According to Bortnik, the information spread by the British Foreign Office that in the event of a Russian invasion of Ukraine, Muraev was supposedly destined for the role of the head of a “pro-Russian” puppet government, was a kind of black mark for this media outlet, although since 2018 the ex-deputy has been under sanctions from Moscow.

The Russian Foreign Ministry has repeatedly repeated that Moscow is not planning any coup d'etat in Ukraine, is not preparing for an invasion and the establishment of a "puppet regime."

“The broadcast of the thesis that Muraev is a “protege of the Kremlin” aimed to demonize this politician, and, it seems to me, it was planned in this way to increase potential support for the closure of the TV channel from the Ukrainian society,” Bortnik believes.

The expert is sure that Western countries will not stand up for the Nash TV channel, as is the case with the sanctions imposed against 112 Ukraine, ZIK, NewsOne and other Ukrainian media.

According to Bortnik, the United States and European states are not interested in upholding the values ​​of democracy and freedom of speech in Ukraine.

The expert believes that the West supports Kiev's policy aimed at squeezing opposition media out of the information field.

“A negative reaction to the imposition of sanctions against the Nash TV channel from the Western countries can not be expected.

At most, this topic will be discussed by small American and European media, but this situation will definitely not be on the agenda of Western political leaders, ”summed up Semchenko.