China News Service, Feb. 12 (Xinhua) According to a comprehensive report, the situation in Ukraine this week has been ups and downs. It has eased from the diplomatic mediation between France and Germany, and the United States has played up threats and has caused a cloud of war. U.S. Secretary of State Blinken said on the 11th that Russia is sending more troops to the Russian-Ukrainian border and 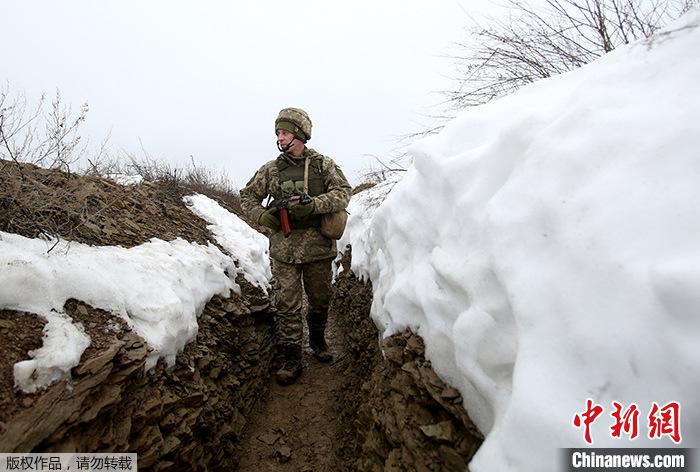 China News Service, Feb. 12 (Xinhua) According to a comprehensive report, the situation in Ukraine this week has been ups and downs. It has eased from the diplomatic mediation between France and Germany, and the United States has played up threats and has caused a cloud of war.

U.S. Secretary of State Blinken said on the 11th that Russia is sending more troops to the Russian-Ukrainian border and may "invade" Ukraine at any time.

The U.S. Defense Secretary has ordered an additional 3,000 U.S. troops to Poland, and the U.S. has called on its citizens to leave Ukraine as soon as possible.

However, the Russian side has clarified many times that the so-called "invasion of Ukraine" is just a Russian threat theory played up by the United States for its own purposes.

A Ukrainian soldier patrols a trench near the village of Luhansk in the Donetsk region on January 11, 2022.

even given the date

This week, the French and German leaders had been engaged in intensive shuttle diplomacy, seeking to de-escalate tensions in Ukraine.

However, on the 11th, the situation in Ukraine tightened again.

Because U.S. Secretary of State Blinken said on the same day that Russia is adding troops to the Russian-Ukrainian border and may "invade" Ukraine at any time.

U.S. President Biden also called on his citizens to evacuate Ukraine as soon as possible, and U.S. Defense Secretary Austin immediately ordered an additional 3,000 U.S. troops to be sent to Poland to assist in the evacuation of Americans from Ukraine.

Previously, the US Defense Secretary had ordered 1,700 troops to be deployed to Poland.

In addition, the United States is also stepping up aid to Ukraine's military weapons.

At present, the 14th batch of aid weapons has arrived in Ukraine, including more Javelin anti-tank missiles.

Several senior U.S. officials also warned on the 11th that Russia has deployed powerful sea, land and air forces on three sides of Ukraine and may launch a large-scale attack on Ukraine at any time, with air strikes expected to take the lead.

According to US media Politico, US President Biden even said in a video conference with leaders of Western countries, the European Union and NATO earlier on the 11th that the date of Russia's "invasion" of Ukraine was February 16.

But European leaders disagree on the date and the inevitability of escalation.

The EU refused to believe the intelligence, a European official said.

U.S. President Biden also asked for an early call with Russian President Vladimir Putin on the 12th to discuss the tension in Ukraine. The original date was the 14th.

Russia has agreed to the U.S. request.

Russia: The West is engaged in information warfare again

In fact, the United States this time again claimed that Russia would "invade" Ukraine, just as Russia and Belarus launched the "Alliance Resolve-2022" joint military exercise at several military training grounds in Belarus on the 10th.

Russia and Belarus decided to conduct this exercise as early as last November. The exercise aims to test the ability of the Russian-Belarus Union State Rapid Response Force to prevent and repel external aggression, combat terrorism and protect the interests of the two countries in defensive operations.

It is estimated that this exercise has attracted the "attention" of the United States and NATO.

However, although the United States once again exaggerated the threat of war, British Defense Secretary Wallace said during his visit to Russia that the Russian military said it had no intention of invading Ukraine.

"We have heard assurances from Defence Minister Shoigu and Chief of General Staff Gerasimov that Russia has no intention of attacking Ukraine. If they told me they had no intention of invading Ukraine, I would take them seriously and believe them," the British Defence Secretary said.

Regarding the latest U.S. rendering, the website of the Russian Ministry of Foreign Affairs released a message saying that Russia is under a coordinated information attack, and Western media are spreading false information about the so-called "Russian aggression" in Ukraine.

A Ukrainian soldier patrols in the Donetsk region of southeastern Ukraine on January 10, 2022.

"In fact, Western media serve the political needs of their own governments, spreading disinformation in a coordinated manner, engaging in a full-scale information war."

“The end of 2021 and the beginning of 2022 saw an unprecedented scale and well-organized propaganda campaign in the world information space aimed at convincing the international community that Russia is preparing for an invasion of Ukrainian territory.”

Recently, the deterioration of Ukrainian-Russian relations has accelerated, and the two sides have deployed a large number of military personnel and weapons in the border areas of the two countries.

The United States, Ukraine and NATO have repeatedly claimed that Russia has assembled a large number of troops near the eastern border of Ukraine and has the potential of "invasion".

In fact, Russia has repeatedly denied Western and Ukrainian accusations of "aggressive actions", stating that Russia did not threaten anyone and did not intend to attack anyone, and that the "Russian aggression" claim was used as an excuse for the Deploy more NATO military equipment nearby.

The Russian Foreign Ministry previously pointed out that Western remarks about "Russian aggression" and that it can help Kiev avoid aggression are "ridiculous and dangerous".