"Freedom convoys" in Paris: incidents, but no paralysis of the capital

Thousands of vehicles converged on Paris on Saturday to participate in several demonstrations against the health pass. Incidents broke out, but the blocking of the capital, desired by c… 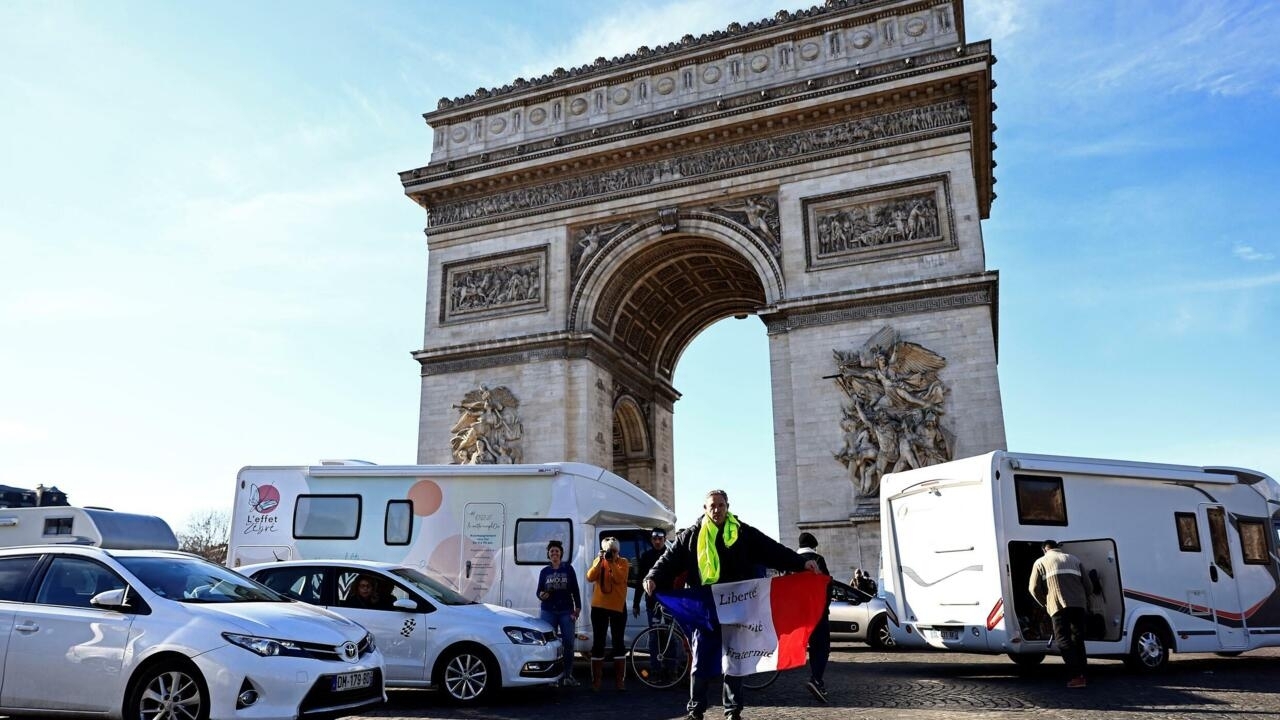 It was better to avoid traveling in a motorhome on Saturday February 12 in the streets of Paris.

Instructions of "firmness" had been transmitted to the 7,200 police forces deployed to prevent the blocking of the capital by "freedom convoys", a motley movement of opponents of Emmanuel Macron and the health pass, inspired by that Canadian truckers that is currently paralyzing the Canadian capital Ottawa.

All morning gendarmes and police therefore filtered access to the capital.

At Porte Maillot, several dozen members of the police had the task of systematically stopping the caravans to carry out checks.

Coming from Perpignan, Sarah * and a friend assure France 24 that they have gone to Paris "simply to see family. We have nothing to do with the freedom convoy", explain the occupants of the motorhome whose dashboard is adorned with a poster paying homage to Professor Luc Montagnier, a figure in conspiratorial and anti-vaccine spheres, who recently passed away.

"Let's go back to things: you came to attend a prohibited demonstration", asserts a police officer visibly unconvinced by the confused explanations of the young woman to justify her presence in the capital.

"Overall, the checks are going very well," slips an agent.

"Some even recognize that they came to take part in the demonstration".

A little earlier in the day, the police had started to carry out hundreds of checks, in particular Porte de Saint-Cloud where a convoy of 450 vehicles was intercepted, disrupting traffic on the ring road without however blocking it.

Interception of convoys and systematic verbalization of offenders by the police and gendarmes.

The Paris police headquarters reported at the end of the morning 283 verbalizations for participation in a prohibited demonstration on the public highway.

>> To read also on France24.com: The Canadian "Freedom Convoy", a movement closer to QAnon than to the Yellow Vests

The ban on gathering convoys was upheld on Friday evening by the Paris administrative court, which rejected two appeals.

On social networks, calls to "hide the flags" and "to find an alibi to enter Paris" were shared to thwart the controls in a game of cat and mouse which lasted until the beginning of the afternoon. .

Attempt to blockade on the Champs-Élysées

Despite the strong police presence, more than a hundred vehicles finally defied the ban on reaching the Avenue des Champs-Élysées, where armored police vehicles had been parked at the foot of the Arc de Triomphe, a first since the demonstrations of the "yellow vests".

Tensions then erupted between police and demonstrators trying to block traffic to cries of "freedom!".

Tear gas was fired to disperse the crowd as vehicles were impounded.

On the #ChampsElysees, each group is dispersed by several tear gas canisters.

In a video widely shared on twitter, a gendarme was filmed breaking the window of a motorist who refused to comply after being asked to drive several times.

A policeman breaks the window of a vehicle refusing to move on the Champs Elysées.

A demonstration and a blockage are underway near the Arc de Triomphe.#convoisdelaliberte#ConvoiFrance2022#GiletsJaunespic.twitter.com/1Xf7lYw0YR

"I'm here to defend our freedoms. We were made to believe that we could trade our freedom for more security, I don't want this world for my children, I just want people to have a choice", explains François, a demonstrator interviewed by AFP.

Two months before the presidential election, the demonstrators once again wanted to demand the withdrawal of the vaccination pass and defend claims on purchasing power or the cost of energy.

The government has said it plans to lift the vaccination pass by the end of March or the beginning of April and intends to abolish the obligation to wear a mask in places where the pass is required as of February 28.

Some participants now hope to join the ranks of the processions against the vaccine pass organized each week.

Friday, Rémi Monde, one of the initiators of the movement launched calls to again occupy roundabouts.

"I appeal to join all the big cities to occupy them, multiply the gathering points".

Others then plan to join Brussels for a "European convergence" scheduled for Monday 14 February.

The Belgian authorities have already banned access to the capital where exceptional means will be deployed such as anti-barricade tractors, armored vehicles and water cannons.

*Name has been changed