The Kremlin reveals the secret of Putin and Macron sitting opposite the controversial table!

Kremlin spokesman Dmitry Peskov confirmed that French President Emmanuel Macron had not undergone a Russian examination for the Corona virus, which caused him to sit at a distance from his Russian counterpart during their talks on Monday. fulfilled 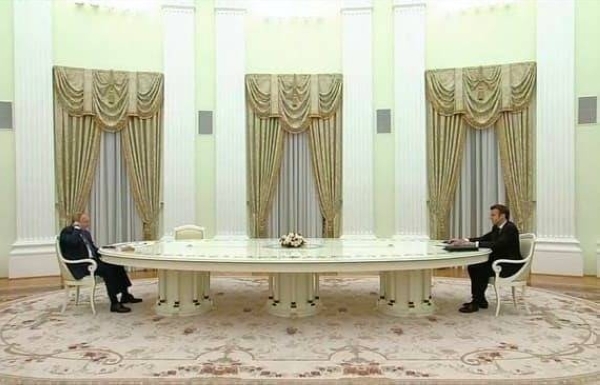 The Kremlin reveals the secret of Putin and Macron sitting opposite the controversial table!

Kremlin spokesman Dmitry Peskov confirmed that French President Emmanuel Macron had not undergone a Russian test for the Corona virus, which caused him to sit at a distance from his Russian counterpart during their talks on Monday.

"Yes, that's right," Peskov said, in response to a journalist's question about the validity of the information that Macron had not been tested for Covid before meeting Putin.

Peskov explained that the characteristics of the negotiations between Russian President Vladimir Putin and foreign guests in the Kremlin are related to the different anti-Corona rules in different countries.

“In some cases, Putin communicates with his guests directly, at a very close distance, and they shake hands,” he said.

But some officials are negotiating with them behind a table about six meters long.”

"It comes down to the fact that some leaders follow their own rules and do not cooperate with the host side in terms of sharing tests," Peskov added.

"We understand that, this is a normal practice in the world... But in this case, the protocol of additional measures to protect the health of our president and our guests is activated at the same time, and then a greater distance is adopted," he said.

Peskov stressed that the matter "has nothing to do with politics." Everyone "deals with this with full understanding, and this in no way hinders the negotiations, and this is the most important thing."

And on Thursday, the Elysee Palace announced that Macron had rejected the Kremlin's request to conduct a Russian examination of Corona, and thus he remained at a great distance from his Russian counterpart, Vladimir Putin, during their meeting in Moscow.

During Macron's visit to Moscow, he and Putin were seen sitting at a long table that was separated by a striking distance.

The Elysee said that "the conditions of the protocol that allow for a meeting between the two heads of state, shaking hands and sitting around a smaller table imposed a Russian health protocol that seemed unacceptable and incompatible with us."

Instead, a source at the Elysee said Macron had taken a PCR test before leaving France and then an antibody test by his personal doctor upon his arrival in Russia.

The Elysee declined to comment on media reports that Macron refused to take the test, fearing that Russia would obtain his DNA.