Bread and gas.. Egypt's fears and interests from the Russian-Ukrainian crisis in a question and answer

With this report, Al Jazeera Net seeks to answer questions related to the dimensions of food security in Egypt, and its ability to be one of the possible alternatives to Russian gas to Europe, in light of the current Ukrainian border crisis. 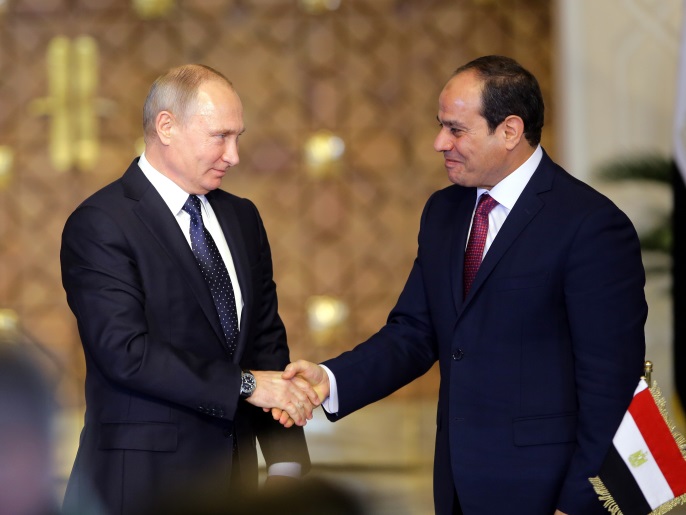 Unprecedented tensions on the Ukrainian-Russian borders, which have reached their climax after threats of international intervention following fears of a possible Russian invasion, at a time when Egypt is awaiting these repercussions that bear both benefits and harms.

On the one hand, the Egyptian interest in the Ukrainian border crisis appears to be linked to potential benefits that it may reap if Russia stops supplying Europe with natural gas, after the US administration recently placed it among other gas producers as candidates to compensate for the possible Russian shortage.

On the other hand, Egypt may be - according to reports and observers - one of the most prominent affected by the instability of the situation on the Ukrainian borders, in light of being the largest buyer of wheat in the world, and the irony is that most of it is from Russia and Ukraine.

According to historical indicators and facts, bread crises are usually associated with political and social instability in the country, which prompts successive governments to deal with it as a national security issue.

In this report, Al Jazeera Net seeks to answer questions related to the dimensions of food security in Egypt, and its ability to be a potential alternative to Russian gas to Europe, in light of the current Ukrainian border crisis.

What is the relationship of Egyptian wheat to the Ukrainian border crisis?

There are fears that have increased in recent months of possible repercussions on the global wheat market, which in turn increases the financial burden on Egypt, in light of the following indicators:

Is Egyptian wheat affected by the Russian-Ukrainian conflict?

According to the statements of the Egyptian economic expert, Abdel Nabi Abdel Muttalib, to Al Jazeera Net, there are fears that the conflict will lead to crises in the global wheat market, and a decrease in its supply as a result of the cessation of Russian and Ukrainian wheat supply.

He pointed out the possibility of the impact of these tensions on the rise in international prices of wheat and flour.

And Egypt being the largest importer of wheat, means that the crisis will increase the burdens on the balance of payments.

Is the strategic stockpile enough if war breaks out?

On the other hand, official statements came out, apparently aimed at reassurance, excluding the impact of the crisis on wheat supplies in the country for at least 6 months, if wheat imports from Russia and Ukraine stopped.

In statements to the local press, Nomani Nasr, advisor to the Minister of Supply for Supply Commodities Affairs, said that with the entry of the local wheat marketing season, it will exceed its strategic reserve for a period of 6 months, as local wheat is used as a strategic stockpile, and it is mixed with the imported one.

Do international tensions precipitate the decision to stop support completely?

Abdul Muttalib believes that stopping, rationalizing or reducing subsidies is a purely local decision, and has nothing to do with global developments.

However, he added that this does not prevent these tensions and price hikes from supporting the government in taking a decision to raise the prices of subsidized bread.

What are the Egyptian alternatives to overcome the potential wheat crisis?

According to Abdel Muttalib, the alternatives before Egypt to overcome the potential wheat crisis are:

Does Egypt benefit from the escalation of Russian-Ukrainian tension?

Egypt's position here reinforces the great leap it made in exporting natural gas in the past period, supported by the discovery of a number of its fields in recent years.

According to the economist, the current tensions have led to the consideration of Egyptian gas as a better alternative in the event of any shortage of Russian natural gas supplies to Europe.

Abdul Muttalib pointed out that it also led to a clear rise in oil prices during the current February, which contributes to an increase in the value of oil exports on the one hand, and an increase in Suez Canal revenues from transiting oil tankers on the other hand.

Is Egyptian gas the closest alternative?

Egypt represents one of several countries that are potential alternatives to Russian gas. On the one hand, the US Bloomberg Agency reported, last Wednesday, that the White House communicated with gas producers, including Qatar, Nigeria, Egypt, Libya and companies operating in Algeria, about increasing production in the event of the outbreak of business. "hostile".

On the other hand, Egypt achieved the largest growth among the Arab countries exporting natural gas in the fourth quarter of 2021, according to the Organization of Arab Petroleum Exporting Countries (OAPEC).

The organization indicates that Egypt exported about 2.1 million tons during this quarter, compared to one million for the same period in the previous year 2020, surpassing the UAE.

However, there are still several countries that exceed Egyptian production by stages, including Qatar, which came at the forefront of the largest Arab LNG exporter during the third quarter of last year with about 19.1 million tons, Algeria 2.4 million, Oman 2.5 million.

How much is Egypt's gas export capacity?

And what is its revenue?

It succeeded in operating both stations during the fourth quarter of 2021 at their full capacity of 1.6 billion cubic feet per day, taking advantage of the surplus from local consumption due to the decline in demand for electricity in the winter, and benefiting from the rise in spot prices in global markets.

Pakistan, India, China, and most recently Turkey were the main destinations for LNG shipments from the Damietta terminal.

As for the return, the value of Egypt’s exports of natural and liquefied gas jumped during 2021 by 550 percent to reach $3.9 billion, compared to $600 million in 2020, according to statements by Minister of Petroleum Tarek El Molla, last Wednesday.

In response, Ibrahim Fahmy, the Egyptian international expert in the oil and gas industry and maritime transport, explained, in statements to Al Jazeera Net, the following points: