An ancient ceremony .. From the homeland of Shakespeare at the "Dubai Expo"

With a program full of events, the United Kingdom celebrated its National Day at “Expo 2020 Dubai”, yesterday, as Al Wasl Square and several sites at the International Exhibition witnessed a series of cultural, entertainment and scientific shows that highlight the nobility of the country of Shakespeare and Isaac Newton. 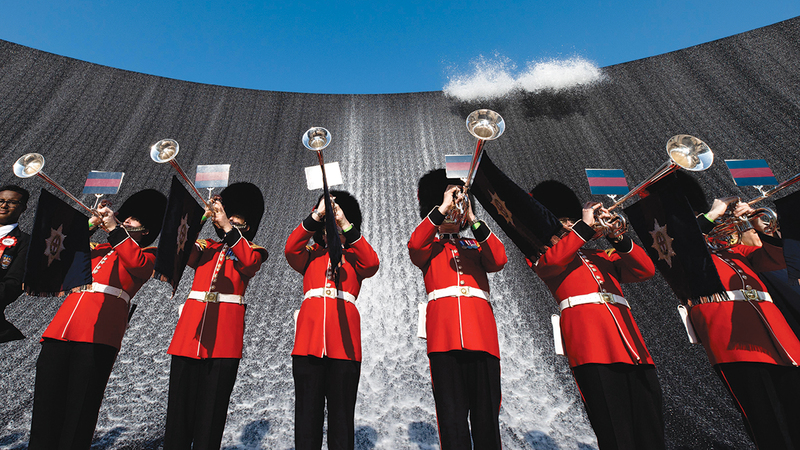 The United Kingdom celebrates its National Day with the exhibition

An ancient ceremony .. From the homeland of Shakespeare at the "Dubai Expo"

With a full program of events, the United Kingdom celebrated its National Day at “Expo 2020 Dubai”, yesterday, as Al Wasl Square and several sites at the International Exhibition witnessed a series of cultural, entertainment and scientific performances that highlight the nobility of the country of Shakespeare and Isaac Newton.

The celebrations included the signing of an agreement to expand trade between the United Kingdom and the United Arab Emirates, and the visit of Prince William, Duke of Cambridge, to the Expo 2020 Dubai site as part of his first official trip to the UAE.

The celebrations, which took place in Al Wasl Square, included a cultural performance by the British Army's Cold Stream Guards, whose members performed in red jackets and bear hats.

The events also included a visit by British school children to "Expo 2020 Dubai", as well as a series of various shows, and a review of the Birmingham Games 2022 at the site of the international event.

Noura Al Kaabi said: “The slogan of the UK Pavilion (Innovation for a Shared Future) embodies the role it plays in the development industry at the global and regional levels, and its superior innovations related to future sciences and technology, as well as its innovative contributions in the fields of space, artificial intelligence and energy. And many other sectors.

She added, "The presence of the United Kingdom in (Expo Dubai) represents a valuable opportunity for our two countries to consolidate the cultural relations that link us, and to establish creative activities that bring together artists, thinkers and innovators from the two countries to exchange ideas and build bridges of understanding to achieve common interests."

For her part, Nadine Doris emphasized that the United Kingdom and the United Arab Emirates share deep and historical ties, adding: “We are committed to addressing global issues together, and we have strengthened that relationship through the new and ambitious (Partnership for the Future) agreement that we will use, in tandem with the Partnership for the Future. Expanded investment between the United Arab Emirates and the United Kingdom, to create new trade, and cooperation in a number of areas, including life sciences, education, climate and security.

We are the home of Shakespeare, Harry Potter, James Bond, singer Adele, Isaac Newton and Stephen Hawking, the birthplace of the man who invented the World Wide Web, which changed life as we know it, and the country that invented the greatest game on Earth, soccer.

It is difficult to condense thousands of years of literature, innovation, science and creativity into one place;

So I recommend that people come see it with their own eyes on a visit to the UK.”

The festivities got off to an exciting start, as the Cold Stream Guards carried the Queen's Button track from the British Pavilion through several pavilions as part of preparations for the upcoming Commonwealth Games.

Forty children from Dubai British School participated in the activities that included the Rugby World Cup at the Sports and Fitness Center at Expo 2020 Dubai, and enjoyed watching the Expo waterfalls.

The program also hosted a variety of artistic events that were presented in different parts of the "Dubai Expo".

A message from the Queen

The Queen's Baton Relay is a worldwide relay that takes place prior to the start of the Commonwealth Games.

The patton carries a message from the Head of the Commonwealth, now Queen Elizabeth II.

Navkiran Mann, one of the baton bearers, said: "It is a great honor to be part of the Queen's Baton Relay, which takes place before the Commonwealth Games, which will take place from July 28 to August 8."

• A busy program witnessed by the National Day of the United Kingdom at the International Exhibition.