"The Gazelle is Reliable" at the "Expo Dubai"... with a Kuwaiti touch

Kuwaiti artists, Mutref Al-Mutref and Alaa Al-Hindi, performed a concert, the night before last, on the jubilee platform at "Expo 2020 Dubai", and presented a bouquet of the most beautiful Gulf and Arab songs. Over the course of the international event 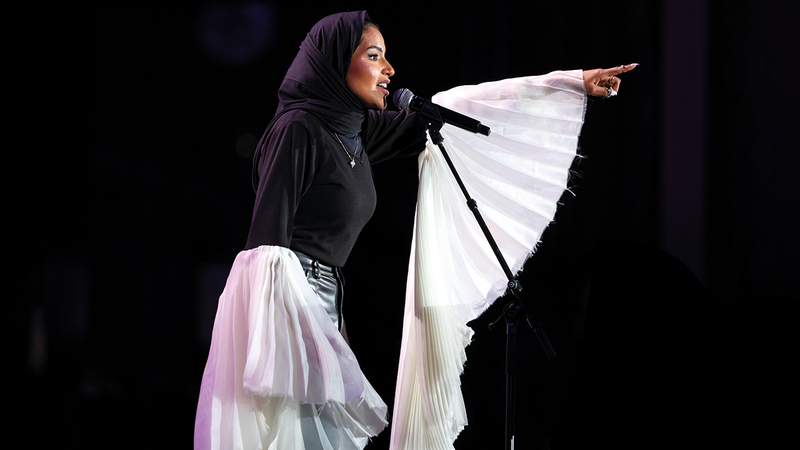 "The Gazelle is Reliable" at the "Expo Dubai"... with a Kuwaiti touch

Kuwaiti artists, Mutref Al-Mutref and Alaa Al-Hindi, performed a concert, the night before last, on the jubilee platform at Expo 2020 Dubai, and presented a bouquet of the most beautiful Gulf and Arab songs.

The ceremony was part of a series of performances "Session at Expo", which is organized once a month throughout the international event, with the participation of a number of the most famous singers from the region.

The "Expo 2020 Dubai" audience enjoyed a group of the most beautiful Gulf and Arab songs, presented by the artist Alaa Al-Hindi, in various Arabic dialects, to satisfy the tastes of all visitors from the region and the world.

Meanwhile, the artist Mutref Al-Mutref sang a number of his old and new works, which also entertained the audience by playing the oud, accompanied by the Kuwaiti band's melodies, to add more distinction to the musical evening that ignited the atmosphere of the jubilee stage.

Among the songs presented by Alaa Al-Hindi are: “Abnasakom” by Nabil Shuail, the Iraqi song “Kun Naseer, I and You,” “The Sahih Hearts” by Nawal Al Kuwaiti, “There is no one comfortable” by Abdullah Al-Ruwaished, “I love you and I miss you” by Hussein Al Jasmi, and “I love you and I miss you.” Hatmanaleh Al-Khair” by singer Angham, in addition to the Egyptian song that was recently famous, “Al-Ghazala Raika”, and other distinctive Gulf and Arab works.

As for Mutrif Al-Mutref, the most prominent songs that were presented during the concert were: “Al”, “Labih”, “Exhausted Gram”, “If You Are Love”, “Ya Nour Al-Ain”, “Dedication from My Heart”, and other Gulf-style songs. .

The joint song entitled "Fahmouh", which was presented by the two Kuwaiti artists, was the surprise of the ceremony.

The two stars, who were born and raised in the State of Kuwait, are distinguished by their musical creativity. Mutref Al-Mutarrif - the son of the late Kuwaiti singer Youssef Al-Mutarrif - began singing as a teenager in front of his friends, and then in front of the public to build his fan base.

In 2013, he won first place in the Musical Arts Festival of the Cooperation Council for the Arab States of the Gulf.

In 2014, he signed a contract with "Rotana" for audio and video to produce and distribute his works, and in 2015, actors Fouad Ali and Haya Abdel Salam participated in a music video for his song "Labayeh".

As for the Kuwaiti actress and singer, Alaa Al-Hindi, she started her career in 2014, through her participation in the play "The Return of Recruitment".

Since then, she has managed to make a place in her hometown of Kuwait and the rest of the Gulf countries in many films, and then she turned towards the lyrical color, through her songs: "Oh, my child", "No one loves you" and "Does not dream".

In December 2017, she performed a distinguished singing performance in her career, during the opening ceremony of the 23rd Arabian Gulf Cup, with the participation of singers Nabil Shuail, Abdul Karim Abdul Qadir and Mohammed Al Misbah.

• Mutrif presented to the audience a number of his old and contemporary works, including: “Al”, “Labih” and “Ya Nur al-Ain”.

• Alaa sang in various Arabic dialects, to satisfy the tastes of visitors from the region and those attending the concert.

• The two artists together presented the song "Fahmouh", which was the surprise of the concert at the "Dubai Expo".