"Draw other states into the game": how the United States and its allies plan to resist the "pressure of dictatorships" on Australia

The interstate association QUAD, which includes Australia, the United States, Japan and India, will jointly resist the coercion and external pressure that is being exerted on Canberra. This statement was made by Australian Prime Minister Scott Morrison at a meeting with the foreign ministers of the countries participating in the quadripartite partnership. In turn, the head of the State Department, Anthony Blinken, on the eve of the summit, gave an interview to The Australian, in which he said that Washington and London intend to find an "effective and efficient way" to equip the Australian Navy with nuclear submarines. At the same time, the Secretary of State stressed that the "alliance of democracies" is stronger than the "unification of dictatorships", which meant the partnership between Russia and China. According to experts, 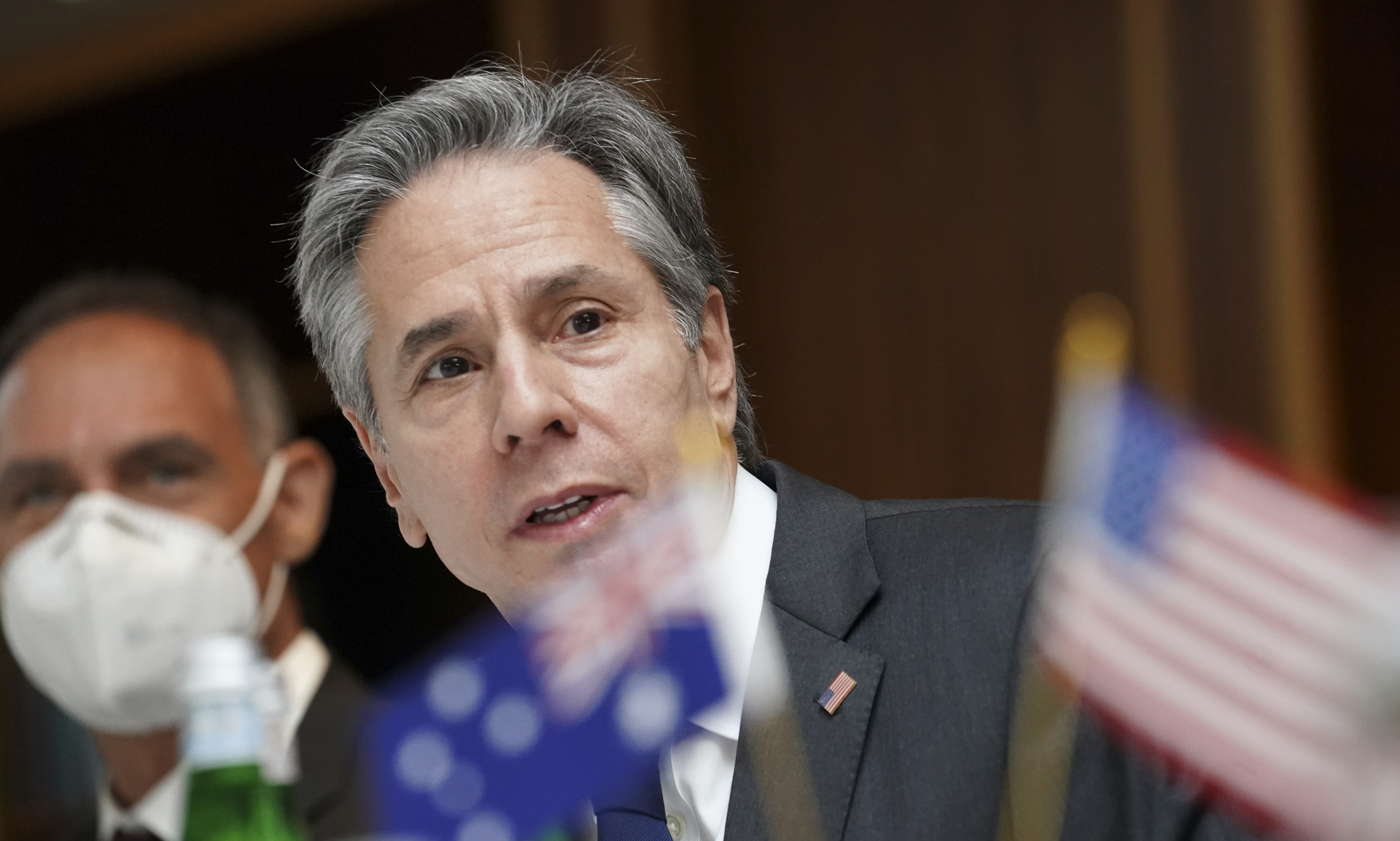 “Each of us stands for a world order that supports freedom, particularly here in the free and open Indo-Pacific region.

Today we are discussing mainly how we will always continue to stand up for those of our values ​​that unite us most.

And by acting in this way, we resist those who would seek to force us, ”SBC News quoted Morrison as saying at a meeting with the foreign ministers of the participating countries of the association.

The QUAD talks took place this Friday in Melbourne.

Recall that QUAD is the so-called four-way security dialogue.

The community was founded in 2007.

The declared goals of the format are stability in the Asia-Pacific region (APR), democracy, the rule of law, a free economy, the fight against climate change, etc.

Ahead of the QUAD Foreign Ministers' meeting, US Secretary of State Anthony Blinken told The Australian in an interview that the United States and Australia must work together to counter China's global ambitions.

According to him, realizing its hegemonic ambitions, China is acting more and more aggressively both within the country and in the Asia-Pacific region.

“In my opinion, there is little doubt that China's goal is to eventually become the leading military, economic, diplomatic and political power not only in the region but throughout the world,” Blinken said.

At the same time, as the US Secretary of State explained, Washington and Canberra do not seek to restrain the development of Beijing, their goal is to protect liberal values ​​\u200b\u200band the international order, which China allegedly challenges.

In addition, as Blinken emphasized, the United States has a negative attitude towards Beijing's rapprochement with Moscow.

In his opinion, the interaction of the two states creates certain problems.

However, as the head of the State Department believes, "an alliance of democracies is always much stronger than an alliance of dictatorships, which are both Russia and China."

Under the current conditions, Washington with allies and partners is coordinating efforts through NATO, the EU, the OSCE and is developing new interstate associations such as QUAD and AUKUS (Australia, United Kingdom, United State), Blinken added.

Recall that the new alliance of the United States, Australia and Great Britain AUKUS, referred to by the first letters in the names of these countries in English, was established in September last year.

The partnership has a military focus and provides for the coordination of efforts to uphold "common interests in the Indo-Pacific region."

At the same time, immediately after the announcement of the creation of AUKUS, the Prime Minister of Australia announced that Canberra was refusing to implement a contract signed in 2016 with the French side for the manufacture of a dozen Attack-class diesel-electric submarines in favor of an agreement with the United States, which promised Australia to transfer technologies for the production of our own nuclear submarines.

As Scott Morrison announced at the end of September, the production of nuclear submarines will be deployed at the Australian naval shipyard in Adelaide.

The first submarines may enter the fleet in 2036.

At the same time, Canberra admitted that before the commissioning of new nuclear submarines, Australia will be able to rent British or American nuclear-powered ships.

In an interview with The Australian, Blinken did not rule out that the country could indeed be temporarily equipped with second-hand nuclear-powered submarines, although he did not consider this form of leasing to be the most suitable option.

At the same time, according to the US Secretary of State, Washington and London "are determined to find opportunities for Australia to acquire nuclear submarines as soon as possible."

“We are extremely focused on (faster. -

) going through the route to the acquisition (by Australia. -

) of submarines, and we are considering all possibilities to find the most effective and efficient way.

Now our experts are actively studying this issue,” Blinken said.

The idea to equip Australia with a nuclear submarine fleet is actively supported by Japan, a member of QUAD.

In an interview with The Australian, Japanese Foreign Minister Yoshimasa Hayashi called the project "an important initiative for the security of the Indo-Pacific region."

“Military trends in China, combined with the lack of transparency in its defense policy, have become a matter of serious concern for the region, including Japan and the international community,” TASS quoted the Japanese Foreign Minister as saying.

It should be noted that recently Tokyo began to move closer to Canberra through military cooperation.

So, on January 6, during a virtual summit, Scott Morrison and Japanese Prime Minister Fumio Kishida signed an agreement on cooperation in the defense sector.

As stated in a joint statement by representatives of the two states, the new document will help "increase the interoperability of the forces of the two countries and strengthen their potential."

In addition, Kishida and Morrison emphasized the importance of a close military partnership with the United States, saying that the United States has made a significant contribution "to the stability and prosperity of the Indo-Pacific region."

Moscow and Beijing negatively perceive the intensification of the military activities of the United States, its allies and partners in the Asia-Pacific region.

On February 4, following the talks between Vladimir Putin and Chinese President Xi Jinping, Moscow and Beijing issued a joint statement expressing serious concern about the emergence of AUKUS and the cooperation that had begun "in the field of nuclear submarines."

“Russia and China believe that such actions contradict the tasks of ensuring security and sustainable development of the Asia-Pacific region, increase the risk of launching an arms race in the region and create serious risks of nuclear proliferation.

The parties strongly condemn such steps and call on the AUKUS participants to faithfully fulfill their obligations on nuclear and missile nonproliferation, together to protect peace, stability and development in the region,” the document says.

From Moscow's point of view, the United States is pursuing a so-called "double containment" policy towards Russia and China.

According to the Russian Foreign Ministry, such diplomacy is "absolutely anachronistic and does not have good prospects for the United States."

The Foreign Ministry is confident that an equal and open dialogue with Russia, China and other states will bring "much more benefit".

In a conversation with RT, political experts recalled that even during the Cold War, the United States refrained from transferring military nuclear technology to foreign states.

Such an unprecedented step, from the point of view of analysts, will seriously aggravate the military-political situation in the Asia-Pacific region and will not go unanswered by Moscow and Beijing.

“What we are now seeing is the attempts of the United States to gain a foothold in the Indo-Pacific region.

To this end, they actively use the AUKUS and QUAD mechanisms.

In my opinion, Washington is trying to show that it still remains the only pole of power that all other countries should be guided by, ”said Vladimir Vinokurov, professor at the Diplomatic Academy of the Russian Foreign Ministry, in a commentary on RT.

According to the expert, the United States is categorically not satisfied with the geopolitical alignment, which forces them to take into account the national interests of Russia and China.

According to Vinokurov, Washington refuses to recognize that the United States does not have the resources to "contain" the Russian Federation and China and the need to launch a normal dialogue with them.

“I have no doubt that Beijing is now strong enough to defend its interests in the region.

The power of the PLA (People's Liberation Army of China. -

), including the fleet, has increased markedly and continues to grow, including thanks to military-technical cooperation with Russia.

On their own, the Americans can no longer resist this, therefore they are drawing other states of the region into this game, ”explained Vinokurov.

According to the expert, the union of allies and partners is taking place under the "worn out slogans" of democracy, freedom and US leadership on the front of the fight against autocracy and dictatorship.

“Blinken’s statement that the “alliance of democracies” is stronger than the “unification of dictatorships” is difficult to take seriously, because such grandiloquent phrases are allowed by a representative of a country that massively violates human rights around the world, provokes military conflicts and does not take into account the sovereignty of other states ", - Vinokurov emphasized.

A similar point of view is shared by Dmitry Egorchenkov, director of the Institute for Strategic Studies and Forecasts of the Peoples' Friendship University of Russia.

In a RT commentary, the political scientist noted that the United States is trying to create an ideological basis for the activities of AUKUS and QUAD, repeating the propaganda rhetoric of the Cold War about the importance of confronting the “free world” against “dictatorship”.

“The same is happening with NATO, which is taught to see Russia as an exclusively enemy with a non-democratic regime.

In the case of AUKUS, China is the main adversary.

Another thing is that the argumentation of the United States, in this case Blinken, looks clumsy and forced.

After all, the Americans themselves are not shy about violating any principles they declare, including in relations with allies, which Washington itself demonstrated by withdrawing the contract for submarines from under the nose of France, ”said Yegorchenkov.

According to the expert, US foreign policy is unlikely to achieve the goals of "containment" and will only contribute to further rapprochement between Moscow and Beijing.

“The more the Americans try to put pressure on our countries, the faster the approaches of Russia and China in the field of defense and security will converge.

I have no doubt that Moscow and Beijing will be able to work out measures for an adequate, and perhaps even an asymmetric response to the provocative actions of the United States in the Asia-Pacific region,” Egorchenkov concluded.