China News Service, February 9 (Meng Xiangjun) "Clang-clang-", a long and heavy death knell sounded in Washington, D.C., the capital of the United States.   The bell lasted for 90 minutes, up to 900 times before and after. Washington National Cathedral sounded the death knell for the country's 900,000 deaths from Covid-19. Image source: Screenshot of Washington National Cathedral tweet   On F 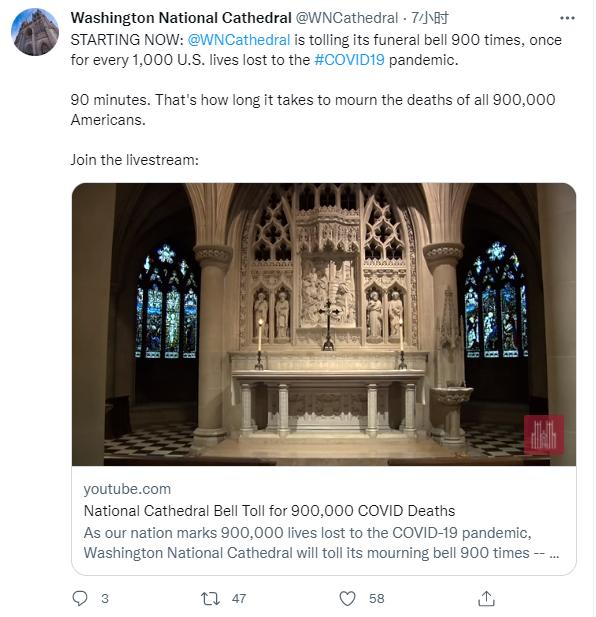 The bell lasted for 90 minutes, up to 900 times before and after.

Washington National Cathedral sounded the death knell for the country's 900,000 deaths from Covid-19.

On February 7, local time, the Washington National Cathedral in the United States tolled 900 bells to express the memory of the 900,000 people registered in the country who died of the new crown pneumonia epidemic.

The 12-ton bell inside the Washington National Cathedral is a tribute to the 1,000 dead with each ring.

In fact, whenever a funeral is held in that church, the death knell is tolled accordingly.

200 times, 300 times, until now 900 times... The US media believes that this has become a "national expression of grief" in the United States.

The Washington National Cathedral in the United States said that every time the bell is ringed, it represents 1,000 dead, and the bell rings again and again.

"90 minutes, that's the time it takes to ring the bell to commemorate 900,000 dead," this time, the cathedral tweeted on its official account.

[The President of the United States and Congressmen mourned]

After the bell-ringing ceremony, the U.S. congressmen present lit candles and observed a moment of silence for those who died of the new crown epidemic.

However, it was reported that only 30 of the 541 members of Congress attended the ceremony.

In a recent statement, U.S. President Joe Biden pointed out that the U.S. has "reached another tragic milestone" as the death toll from new coronary pneumonia in the U.S. surpassed 900,000.

"I know that the emotional, physical and psychological pressure of the new crown pandemic has reached an unbearable level in the past two years," Biden said. "We pray for the loved ones left by the deceased, Our hearts go out to every family suffering."

Statistics show that more than 900,000 people have died from the new coronary pneumonia in the United States.

The death knell sounded again and again in the hearts of the American people.

Some people who participated in the ceremony burst into tears.

This scene seems familiar, because the cathedral has held ceremonies many times, and the last time the bell was ringed for the 800,000 dead from the new crown happened more than 50 days ago.

On January 4, local time, in Puyalup, Washington, the staff of the nucleic acid testing site made preparations in a tent.

Since the outbreak of the new crown epidemic, the United States has been the country with the highest number of confirmed cases and deaths in the world.

In 2020, the number of deaths from new coronary pneumonia in the United States was about 350,000, and in the following year, that number skyrocketed to more than 800,000.

There was a bell ringing time during the period, only more than a month apart.

On September 15, 2021, local time, in Washington, DC, the United States, small white flags are being erected on the National Mall in Washington, each flag represents a person who has unfortunately died due to the new crown epidemic.

At present, the epidemic situation in the United States is still very serious. There are hundreds of thousands of new confirmed cases of new crowns every day, and 99.9% of the new cases are infected with the Omicron variant.

The death rate of the new crown in the United States is higher than that of other developed countries, with an average daily increase of more than 2,600 deaths in the last week, a 30% increase from two weeks ago.

The mandatory wearing of masks in schools and indoor public environments in California, Connecticut, Delaware and other states will expire or be phased out in February.

In some areas, opposition to wearing masks, vaccinations, and social distancing is still the goal of some people.

Can this deafening sound like a flood of bells really "wake up" the country?