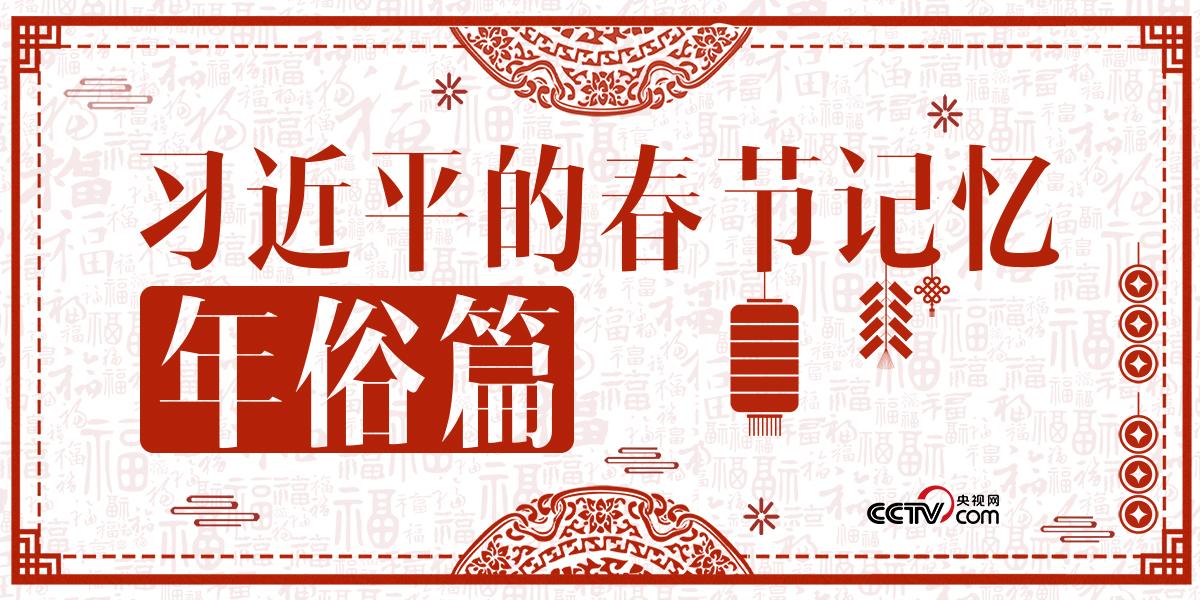 "The Spring Festival is a beautiful time to say goodbye to the old and welcome the new, and it will always bring people new visions." General Secretary Xi Jinping's words express the core of the Spring Festival culture.

The Chinese New Year is a "year of time" to say goodbye to the old and usher in the new, and it is also a "year of culture" to move forward towards kindness.

On the occasion of the most important traditional festival of the Chinese nation, CCTV's "People's Leader Xi Jinping" column launched a series of special articles "Xi Jinping's Spring Festival Memories" to experience the "Chinese New Year style" of the general secretary with you.

"Happy the new year together, welcome and send off in one night." The Chinese people always celebrate the Spring Festival in the most solemn and ceremonial way.

On January 26, 2022, General Secretary Xi Jinping went to Shanxi to visit the grassroots cadres and the masses.

In the past ten years, whenever the Spring Festival is approaching, General Secretary Xi Jinping will always go to the masses, congratulate the Chinese New Year, send blessings, and taste the New Year's customs and culture with everyone.

The sense of ceremony of the New Year begins with the purchase of New Year's goods.

On the eve of the Spring Festival in 2015, General Secretary Xi Jinping returned to Liangjiahe in northern Shaanxi with the New Year's goods purchased at his own expense.

Dumpling powder, rice, edible oil, meat products, as well as Spring Festival couplets, New Year pictures... The New Year's goods that every family has a share are full of nostalgia in his memory and concern for the folks in Liangjiahe.

"Northern Shaanxi Plateau is my root." Xi Jinping's first step in life was to come to Liangjiahe.

In Liangjiahe, the young Xi Jinping spent seven years of hardship but benefited from his life as an educated youth.

In those years, witnessing the hardships of the people and experiencing the suffering of the people, Xi Jinping has an unforgettable understanding of the poverty in rural China.

Later, he frankly stated his simple wish at the time: "One of the things I look forward to is to let the villagers have a full meal of meat and eat meat often."

General Secretary Xi Jinping keeps all the promises made with the poor in his heart, reads them, and does them.

Every year, the "New Year's Goods" list sent by the General Secretary contains both good strategies to get rid of poverty and become rich, as well as the drive to work hard.

Now, his simple wish when he was an educated youth has come true.

China has built a moderately prosperous society in an all-round way, and historically solved the problem of absolute poverty.

The general secretary said: "It is the cause of the Communist Party to make people's lives happier."

On February 12, 2018, General Secretary Xi Jinping went to Sichuan to visit cadres and people of all ethnic groups.

Every Spring Festival, every household will put on the big and small "Fu" characters to express people's yearning for a happy life and their wishes for a better future.

During the General Secretary's Spring Festival inspections, the prosperous word "Fu" often appeared in the warm moments of the camera.

In February 2018, in Zhanqi Village, Chengdu City, Sichuan Province, Ou Kehong, who was voluntarily writing Spring Festival couplets for the villagers, wrote a unique word "Fu" to the general secretary: the left side looks like a standing person, and the upper right side is a house , Arita in the lower right.

"The common people here say that if someone has a house and a farm, they are blessed. I send you this 'blessing' character, wishing our motherland, under your leadership, to be prosperous and safe."

The general secretary happily took the word "blessing" and said it again and again.

In February 2019, in the courtyard of No. 32 Caochang Sitiao Hutong, Qianmen East District, Beijing, resident Hou Yaming wrote a pair of Spring Festival couplets on the spot to pay New Year's greetings to the general secretary.

"This pair of Spring Festival couplets is the name of the four hutongs in our Qianmen area - Qingyun, Xiangfeng, Haojing, Xinglong. It means that in the weather with the sky above the sky, colorful golden phoenixes fly in the hutongs, and everyone has realized a beautiful vision. Our days It's prospering day by day."

The general secretary was in high spirits, and happily picked up a big golden "Fu" character on a red background and posted it on the door in person to greet the old neighbors here.

He said affectionately: "The pursuit of the Chinese Communist Party is to make the lives of ordinary people better and better! Let us work together!"

The next day, in the 1st Squadron of the Guard Service of the Support and Support Brigade in the Beijing Garrison District, Sergeant Yuan Wenkui also wrote the word "Fu" on the spot to send President Xi to express the soldiers' New Year wishes to President Xi.

On the red rice paper, there are two golden seals on both sides of the happy word "Fu", engraved with "Dream of Strong Army" and "Guardians Loyal to the Party"...

"Let the people live a happy life is the 'big one' of the country." The general secretary carries it on his shoulders, and what he has in mind is the well-being of thousands of households.

On January 26, 2022, General Secretary Xi Jinping went to Shanxi to visit the grassroots cadres and the masses

Visiting relatives during the Spring Festival is a custom passed down from generation to generation by Chinese people.

When the taste of the new year is getting stronger, General Secretary Xi Jinping has been running around on the road of investigation and investigation, visiting and condolences to the cadres and the masses.

In the local area, he followed the local customs and welcomed the Chinese New Year with the local folk customs.

In the words of the common people, "the general secretary has no air, and he is like visiting relatives when he arrives at home."

On January 27, 2014, General Secretary Xi Jinping went to Inner Mongolia to investigate and visit cadres and people of all ethnic groups.

In 2014, at the "Five Animals Blessing" ceremony in Naadam, Inner Mongolia in winter, the general secretary dipped his ring finger in the fresh milk in a silver bowl and flicked it three times, praying for the compatriots of ethnic minorities and the people of the whole country in the traditional Mongolian way.

In 2016, in Shenshan Village, Jiangxi, the general secretary picked up the gavel and made chiba with the villagers.

The more sticky the glutinous rice cakes are, the sweeter the days are. The general secretary deeply entrusted the entourage and the local cadres and masses to build a moderately prosperous society in an all-round way, so that the old revolutionary areas that made important contributions to the birth of the People's Republic must develop better.

On January 19, 2020, General Secretary Xi Jinping visited and consoled cadres and masses of all ethnic groups in Yunnan.

In 2020, in the Smola Wa Village in Yunnan, the general secretary sounded three wooden drums of Wa blessing according to local customs, wishing good weather, peace and prosperity for the country and the world.

January 26, 2022, is the twenty-fourth day of the twelfth lunar month in the Xin Chou year of the lunar calendar.

Duan Village, Fenxi County, Shanxi Province is a happy and peaceful scene. The white snowflakes flying all over the sky, accompanied by bright red lanterns and festive Spring Festival couplets, add to the taste of the new year.

The villagers enthusiastically sounded the national intangible cultural heritage - the majestic gongs and drums of Jinnan, and welcomed General Secretary Xi Jinping who came to inspect and condolences.

The drums are thunderous, rough and bold; the cymbals are crisp and refreshing; the gongs are boring and overwhelming; the people are beaming... The general secretary encouraged everyone: "Modernization is inseparable from the modernization of agriculture and rural areas, and we must consolidate the achievements of poverty alleviation and rural revitalization. If the connection is good, the rural life will be modernized, and the more you go, the more exciting it will be.”

Years go by and the seasons flow.

New Year's customs, with traditional memories and flavors, go all the way with the times; they contain the cultural traditions and historical accumulations of a country and a nation, from which we can find the root and soul of the survival, development and continuation of the Chinese nation.

The tiger strides forward to open the grand scene, and does not slack off to continue the Chinese chapter.

New year, together to the future!