Haiti has entered a new phase of political transition: this Monday, February 7, 2022 the president should have handed over power to his successor and left the head of the country with all of his... 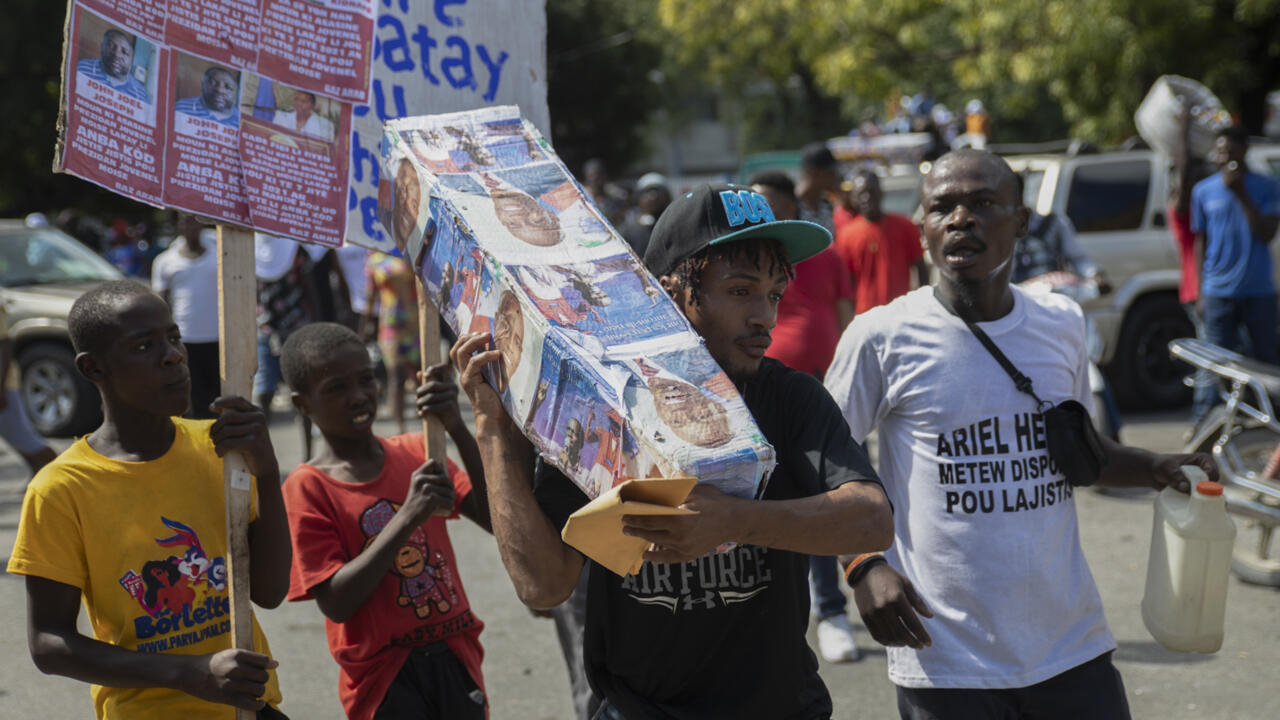 Haiti has entered a new phase of political transition: this Monday, February 7, 2022 the president should have handed over power to his successor and left the head of the country with his entire government.

Since then, Haiti no longer has a head of state but is governed by an interim prime minister.

Part of the political class and civil society believes that he should have left power yesterday.

But Ariel Henry is still there.

The head of the provisional government does not intend to leave.

Ariel Henry repeated it again this Monday, February 7 during a speech to the nation: he will not leave his post before he can hand over power to a new democratically elected president.

But to be able to envisage the holding of elections in Haiti, the problem of insecurity must first be resolved.

We must stop all the terrorists who shoot the innocent, who kidnap both the elderly and the children

“, recognized the Acting Prime Minister in his speech.

Given the magnitude of the task, Ariel Henry refrained this time from announcing any timetable.

A change in tone noticed when only a few days ago, this doctor by training had again affirmed that he wanted to organize the elections by the end of the year.

► To read also: Haiti: Ariel Henry remains in power despite the end of his mandate, the political class disputes

Haiti into an open-air prison

Like so many other Haitians, journalist and writer Hérold Jean-François believes that “

there will be no elections in Haiti for a long time.

Our country is controlled by gangs that prevent the free movement of people, goods and merchandise.

Today it is impossible to move from one department to another without risking one's life.

However, to organize elections, freedom of movement must be guaranteed so that candidates can campaign everywhere on the national territory and so that voters can go to the polls without fear.

we no longer go out except to go to work, for those who still have a job, or to run errands.

The rest of the time, we are forced to hole up at home.

Haiti has become an open-air prison.

How can we envisage holding elections under such conditions?

Other Haitians wonder: if Ariel Henry cannot organize elections due to insecurity, how many weeks, months or years will he stay in power?

Ariel Henry: a Prime Minister whose legitimacy has been disputed from the start

The legitimacy of the interim Prime Minister is more contested than ever.

His fellow citizens reproach him for not having announced a serious program to fight against rampant insecurity.

He is also singled out by his detractors for his links with an alleged author of the assassination of the president.

was appointed Prime Minister by the late President

When the head of state was assassinated on the night of July 6 to 7, 2021, Ariel Henry had not yet been installed in his new role.

The Haitian Constitution provides that the Parliament approves the speech of general policy so that a Prime Minister can officially begin his mandate.

But in Haiti, where no election has been held since 2016, the terms of deputies and two-thirds of senators came to an end in January 2020. Ariel Henry therefore "

came to power outside any constitutional framework

almost all the institutions of the country were disjointed.

The Parliament and the Court of Cassation were already dysfunctional.

The institutions in Haiti could therefore be of no recourse to ensure a certain stability and to be able to organize the elections and continue to operate the State.

The battle for the future: a dozen political transition projects

Faced with such an institutional void, the various political and civil society factions are vying for legitimacy to propose a way out of the crisis.

Today in Haiti there are a good dozen political transition projects.

One is that of Ariel Henry which therefore provides for the holding of elections and the establishment of a new Constitution.

Ten senators, the last elected Haitians still in office, believe they also have a say.

The Haitian diaspora organized a political congress in Louisiana, United States, a few weeks ago.

And then there is the so-called “

” agreement, after the name of the hotel where it was signed.

Written by a broad coalition of Haitian civil society organizations, it provides for a two-year transition.

Time to initiate a transition that wants to break with the status quo and the bad practices of the past reforming institutions and in particular justice.

Launching trials on scandals of embezzlement of public funds or even on massacres in poor neighborhoods of the capital, such is the program - which some consider too ambitious - to put an end to impunity, thus improving the security situation and in fine organize elections.

because today there is unacceptable interference from the international community.

What concerns Haiti is discussed in the American Congress or the European Union or within the famous Core Group, a group of five diplomats in Haiti who opine on everything

", underlines the political analyst who recalls that "

Ariel Henry been installed as Prime Minister by a tweet from the Core Group.

No one can decide, in a small committee, who will be president or prime minister

Ten days ago, the members of the Montana accord, following the process set out in their text,

They are respectively the former governor of the Haitian Central Bank, Fritz Alphonse Jean, and ex-senator Steven Benoît.

In his speech on Monday, Ariel Henry rejected these designations, which he described as "

No one has the authority or the right to meet in a hotel or abroad to decide, in a small committee, who will be president or prime minister

,” lambasted the head of the provisional government, who insisted that it was up to the Haitians to choose their future leaders.

Ariel Henry has a good chance to pose as a defender of Haitian democracy since he has for the moment the support of the international community and in particular of the United States.

Thus, the senior American diplomat Brian Nichols affirmed, a few days ago, that "

from a legal point of view, the mandate of the Prime Minister

While the population is suffering, it is the special interests that take precedence

The United States continues to call on the various Haitian actors to find a common project for political transition.

But it is clear that "

the initiators of the various agreements do not want to agree

Whenever Haiti reaches a crossroads where political actors must come together to get the country out of crisis, it is always very difficult.

Until today, despite the fact that chaos sets in and that we live in complete anomie, the actors remain on their positions.

Nobody wants to move on.

It is the particular interests that take precedence

”, regrets the lawyer before concluding: “

Meanwhile, it is the population which is suffering

You know here in Haiti, we say that politicians want their piece of the cake

Chaos always benefits those in power

The President of the Senate, Joseph Lambert, noted for his part this Monday, February 7, the end of the official mandate of Ariel Henry who, according to the opinion of the senators still in office, was only to manage current affairs from this Tuesday.

The organization of elections and the drafting of a new Constitution are not part of it.

► To read also: Political transition in Haiti: "We are entering a zone of negotiations"