The fruits of myopia: how Moldova is trying to overcome the energy crisis

In the capital of Moldova, a protest action "Stop Energomor" was held against rising gas prices, in which activists of the opposition party "Civil Congress" took part. Earlier, the National Energy Regulatory Agency approved an increase in the gas tariff for residential consumers from $569 to $785 per thousand cubic meters. m. - the decision came into force on January 1 retroactively. Analysts believe that the current situation is the result of the short-sighted policy of the Moldovan authorities, who failed to adequately assess the risks. At the same time, experts do not exclude that the current crisis can lead to destabilization not only of the economy, but also of the political sphere of the republic. 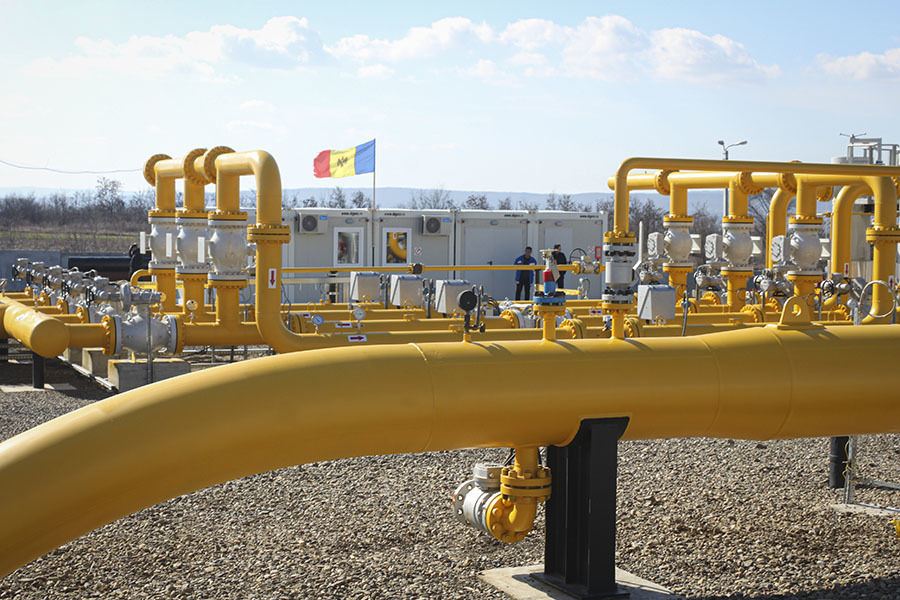 In Chisinau, a protest action "Stop Energomor" was held against the increase in the gas tariff. It was attended by activists of the Moldovan opposition party "Civil Congress". According to the organizers, on February 5, about 600 people gathered near the Moldovan parliament. To express their dissatisfaction with the increase in gas tariffs, the protesters brought manure to the building. In it they placed signs, on the part of which appeared the inscription “Guys, Moldova again fell into the dung (pressed manure.

“The Republic of Moldova in just over six months, and even from the poorest, but still European country, has turned into a real reserve of the Middle Ages.

The reserve, the future of which, the energy future, is almost entirely connected with the reserves of domestic dung,” said Yuri Muntyan, one of the leaders of the protest, a member of the Civil Congress, during the rally.

Earlier, Deputy Prime Minister of Moldova Andrei Spinu stated that the country faced another stage of the energy crisis, since in December the purchase price for gas was $450 per thousand cubic meters, and in January it rose to $646.

After that, the National Energy Regulatory Agency of Moldova (ANRE) approved an increase in the gas tariff for household consumers by about 30% - from $569 to $785 per thousand cubic meters.

The decision came into effect retroactively from 1 January.

Recall that Moldova faced energy problems, like many other European countries.

According to Gazprom, to date, European consumers have withdrawn from underground storage facilities 85% of the gas pumped in the summer - 40.5 billion cubic meters.

“According to Gas Infrastructure Europe, as of February 3, the volume of active gas in European underground storage facilities is 27% (by 13.4 billion cubic meters) less than last year.

84.7% (40.5 billion cubic meters) of the volume of gas pumped in the summer season has already been withdrawn.

The overall level of occupancy of UGS facilities in Europe is 36.7%,” the company noted on February 5 in its Telegram channel.

Gazprom emphasized that since January 11, 2022, the level of gas reserves in European underground storage facilities "moved into the region of record lows over a long-term observation period."

“As of February 3, reserves of 2.7 billion cubic meters.

m less than the minimum figure for this date, ”the company said.

It is worth noting that the Russian energy holding has been negotiating with the Moldovan side for a long time regarding gas supplies and the conclusion of a corresponding contract.

As the company's official representative Sergey Kupriyanov noted, Gazprom's proposals for gas prices "were absolutely market-based and were formed on the basis of exchange trading."

“Taking into account the difficult, very difficult situation in the economic and financial situation of Moldova, I am guided by the desire to preserve for Moldova the possibility of paying off its debt obligations to Gazprom, as well as the position of the President of Russia, to whom the Moldovan side has repeatedly turned for assistance, Gazprom has accepted the decision to sign a contract practically on the terms of the Moldovan side.

But with a significant and important point: Moldova pays 100% of current payments on time,” Kupriyanov said.

This deadline expired on November 22, 2021, but the payment was never received.

As the official representative of Gazprom noted, the Russian side was extremely disappointed by Moldova's failure to fulfill its contractual obligations.

After that, the company granted a delay to Chisinau, although it had every reason to stop deliveries.

This allowed the Moldovan authorities to subsequently pay off the Russian Federation.

As Kupriyanov noted then, the Moldovan authorities publicly reported on how they were “saving the country” and coordinating the allocation of money for the overdue payment to Gazprom.

“There is nothing heroic about it.

It is normal to pay under the contract,” said a representative of Gazprom.

According to him, the very fact that Moldova needed budgetary funds to pay for gas speaks of systemic problems in the energy sector of the republic.

“And this means that the non-payment crisis may repeat itself,” predicted Kupriyanov.

On January 18, Moldovan Prime Minister Natalia Gavrilitsa said that Chisinau was asking Gazprom to postpone the advance payment for the supply of energy until the fuel tariff was revised in the country.

After that, she said that Gazprom had warned of a possible cessation of gas supplies to the republic if the next payment was not made before January 20.

On January 20, the Moldovan Energy Commission ordered Moldovagaz to pay off its debt to Gazprom by the end of the day.

The state promised to allocate funds for these purposes.

Subsequently, the vice-premier of the republic announced the repayment of the debt for January.

According to experts, the aggravation of energy problems in Moldova has been brewing for a long time due to the mistakes of the current authorities and their short-sighted policy, and the pan-European crisis associated with a sharp increase in gas exchange prices has only accelerated this process.

“Moldova is reaping the fruits of the short-sightedness of current officials who made a mistake when they decided to abandon long-term contracts in favor of spot ones, as many European countries did.

But, for example, the leading EU countries could afford to take such a risk, they had a certain resource for this, and now they are experiencing enormous difficulties.

Moldova, on the other hand, was unable to adequately assess the risks and its opportunities, ”said Pavel Feldman, deputy director of the RUDN Institute for Strategic Studies and Forecasts, in an interview with RT.

According to him, what the EU can afford is "deadly for the Moldovan economy."

“Such EU countries as, for example, Germany or France, have financial reserves, which allows them to buy gas even at much higher prices.

In Moldova, the situation is different: by taking risks, the authorities of the republic undermined not only economic, but also political stability, ”the analyst noted.

According to Feldman, the protests that took place in Chisinau indicate that the population of the republic understands what colossal mistakes the current authorities made in energy policy.

“At the same time, a rather sharp increase in gas prices would not be so sensitive for the Moldovan society, if it generally succeeded in the socio-economic sense.

If at least some industry remained in the country, and the authorities of the republic, under the slogans “for European integration”, would not have ruined the economy, thereby forcing many able-bodied people to look for jobs in the EU,” the expert noted.

At the same time, Feldman believes that the “largely anti-Russian policy” of the Moldovan authorities played a cruel joke on them.

“Chisinau, on many issues, behaved rather unfriendly towards Moscow, the main supplier of gas.

And this leaves its mark on the cooperation of the parties, including in the energy sector.

Gazprom showed an act of goodwill and went towards the Moldovan authorities.

But, given the anti-Russian rhetoric of Chisinau, it is possible that the Russian Federation will no longer close the chapter on non-fulfillment of treaty obligations by the republic, ”the analyst suggested.

In turn, the director of the Energy Development Fund, Sergei Pikin, in an interview with RT, emphasized that Moldova is now able to pay for imported gas only by raising its tariffs for the population, which the republic has already done, causing an uproar.

“Chisinau can no longer allocate subsidies for blue fuel directly from the budget, the Moldovan state treasury is no longer capable of this,” he said.

Pikin also believes that Moldova's energy problems have worsened after it "believed that the price of gas can always be low with spot contracts."

“Against the backdrop of a decline in stock prices in 2020, many European countries did not renew long-term contracts with Gazprom and switched to spot contracts.

But the exchange is such a platform where the price of a product can be both low and very high, which was proved by 2021, when the cost of gas there soared many times over.

The countries of Europe thought that it would “sweep”, but it didn’t “sweep”, the analyst said.

He believes that under these conditions, Chisinau received really good conditions from Gazprom for supplies.

“The price for Chisinau was set much lower than the market price.

Russia decided to help the Moldovan authorities, but in return received only a violation of treaty obligations,” the expert said.

At the same time, Pikin predicts that without the help of Russia, Moldova will not be able to overcome the energy crisis.

“Without the assistance of the Russian authorities, Moldova will have to raise gas tariffs at least three times more for the population, which may ultimately result in a change of government and another political crisis in addition to a worsening economic situation,” the analyst concluded.