Ukraine.. Two European leaders visit Moscow in search of a settlement to the crisis and Blinken threatens sanctions against Russia

The Europeans are intensifying their diplomatic efforts to prevent a war on their eastern flank. While the Russian president got the support of China in his confrontation with the West, Washington renewed its threat to Moscow of dire consequences if it attacked Kiev. 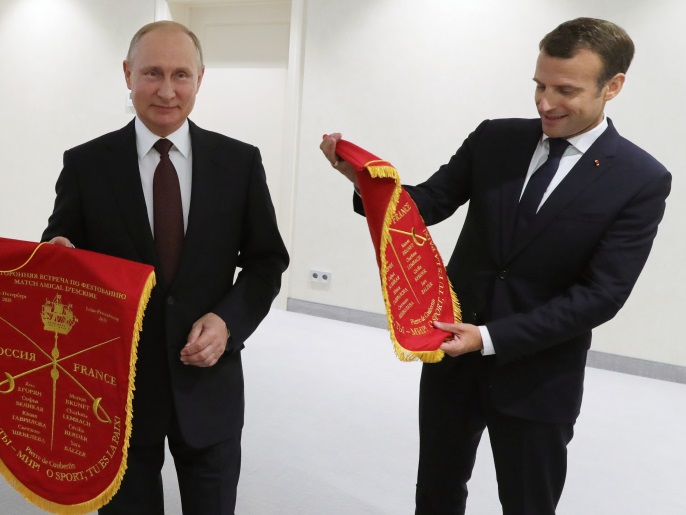 The Europeans are intensifying their diplomatic efforts to prevent a war on the eastern flank of the European Union.

While the Russian president got the support of China in his confrontation with the West, Washington renewed its threat to Moscow of dire consequences if it attacked Kiev.

The Kremlin announced that French President Emmanuel Macron will visit Moscow next Monday, while German Chancellor Olaf Schulz will visit it on February 15 for talks with Putin.

From Moscow, Macron will travel Tuesday to Ukraine, which Shultz will also visit on February 14.

Macron and Schultz's visits to Russia and Ukraine are part of European diplomatic efforts to avert a war in the region, and France and Germany are mediators in the conflict between Ukraine and pro-Russian separatists.

Commenting on Macron's visit, Kremlin spokesman Dmitry Peskov said that "several issues are on the agenda. First of all, there will be talks on security guarantees" demanded by Moscow.

As for Schulz, who will be his first visit to Russia since taking office, Peskov said he expected "substantive talks".

On Friday, Ukraine expressed its "satisfaction" with the Western support, which, according to it, allowed to thwart the "strategy of intimidation" practiced by Moscow for a few months.

This week, officials from Britain, Poland, Turkey and the Netherlands visited Kiev, and the Ukrainian capital is preparing to receive Macron and Schultz.

On the other hand, Russian President Vladimir Putin got - on Friday - China's support in his struggle with the West over Ukraine.

After a meeting with Xi Jinping prior to the opening of the Beijing Olympics, the Chinese and Russian presidents called - in a joint declaration - for a "new era" in international relations and an end to American hegemony.

The two countries - whose relations with Washington are witnessing escalating tension - denounced the role of the two Western military alliances led by the United States: NATO and the "Ocos" alliance, which was established between the United States, the United Kingdom and Australia in 2021, as undermining "stability and a just peace" in the world.

The joint statement stressed that Moscow and Beijing "oppose any future expansion of NATO," which is Russia's first demand in order to reduce tension between it and the West over Ukraine.

Commenting on the results of the meeting between the Chinese and Russian presidents, Daniel Krettenbrink, the senior diplomat in the US State Department for East Asian Affairs, said on Friday that the meeting between Chinese Presidents Xi Jinping and Russian Vladimir Putin in Beijing should have been an opportunity for China to encourage Russia to de-escalate tensions with Russia. Ukraine.

Such an approach is what the world expects from "responsible powers," Krettenbrink told reporters during the meeting that led to China and Russia declaring a deep strategic partnership.

"If Russia invades Ukraine, and China ignores it, this indicates that China is willing to overlook or tacitly support Russia's attempts to coerce or support Ukraine," he added.

Blinken: Russia has two paths ahead

US Secretary of State Anthony Blinken reiterated the Western position that Russia has two paths to resolve the crisis with Ukraine.

He made it clear during his meeting with the Polish foreign minister in Washington that the United States is ready for dialogue and diplomacy, but it is also ready to impose serious consequences if Russia chooses aggression in the crisis with Kiev.

In the same context, on Friday evening, a first batch of American soldiers arrived in Germany - specifically to the military base in Wiesbaden (west) - out of 3,000 soldiers that US President Joe Biden announced this week as sending them as part of military reinforcements.

Defense sources told Reuters that the first batch of US forces is expected to arrive in Poland on Saturday to reinforce NATO's eastern flank, at a time when the West and Russia are wrangling over the Russian military presence near Ukraine's borders.

The sources - who asked not to be disclosed due to the sensitive nature of the arrival of these forces - said that plans could change depending on security and logistical conditions.

On Wednesday, the administration of US President Joe Biden announced the deployment of nearly 3,000 US troops to Eastern Europe in the coming days, amid a confrontation with Russia over Ukraine.

The US military already has about 4,500 troops in Poland, both as part of NATO and bilaterally, most of whom are stationed in western Poland on a rotating basis.