10,000 dirhams as compensation to the family when reporting the runaway maid

The Dubai Nationality and Residency Prosecution encouraged families from which maids or support workers fled to guarantee them to obtain compensation of 10,000 dirhams in the event that the relevant authorities are notified within a period not exceeding 10 days of the escape, and after arresting the fugitive labor with another person. 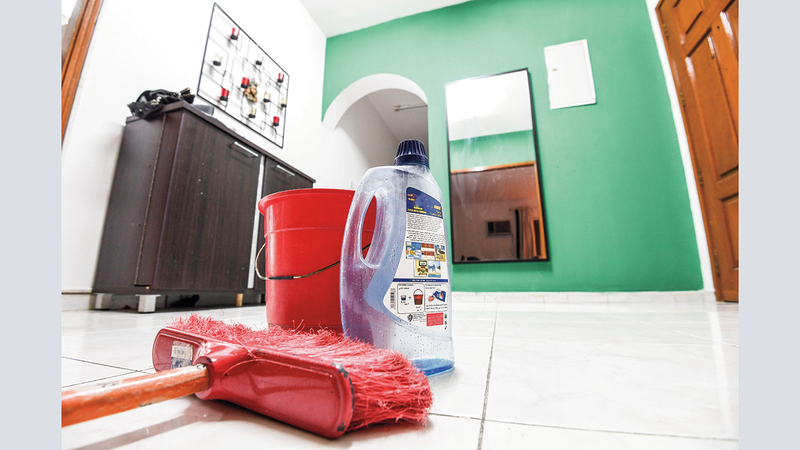 10,000 dirhams as compensation to the family when reporting the runaway maid

The Dubai Nationality and Residency Prosecution has encouraged families from whom maids or support workers have escaped to guarantee them to obtain compensation of 10,000 dirhams in the event that the relevant authorities are notified within a period not exceeding 10 days of the escape, and after the fugitive labor is caught with another person.

The head of the First Nationality and Residency Prosecution in Dubai, Faisal Ahli, said during a remote seminar organized by the Community Development Authority to introduce the Nationality and Residency Law, that many families and individuals neglect to inform the relevant authorities about the flight of support workers despite the importance of this procedure from a legal point of view, and the possibility of compensating them for part Among the losses they incurred in the escape of these workers after spending on the process of bringing them and registering them on their sponsorship, pointing out that families often do not know that they can obtain 10 thousand dirhams as compensation if they caught the runaway maid registered on their sponsorship working for another person, and they had previously reported the initiative .

He explained that the amount of compensation granted to the obligated families who report is deducted from the fine amount of 50,000 dirhams, which is imposed on families or people who employ maids or workers without their sponsorship.

My family revealed that, on the other hand, the person who does not report the escape of the support workers who is on his sponsorship bears a fine of 50 thousand dirhams, and instead of compensating him for his losses, this large fine is added to him, pointing out that many families fall into this error, whether as a result of lack of awareness, or Laziness and forgetfulness, or dependence on servant recruitment agencies that do not adhere to their role for one reason or another.

He stated that a maid ran away from the house of a citizen, and due to his work conditions that required him to be on foreign missions, he did not report her escape for a whole year until she was caught working for another person, so the citizen was contacted and fined 50 thousand dirhams for not reporting, indicating that the law is characterized by Flexibility and allows any person related to the sponsor to inform the competent authorities instead of the flight of the support workers until any justifications for non-compliance are dropped. The reporting process is not complicated at all and can be done by phone at (8005111).

Ahli said that the Nationality and Residency Prosecution launched the "Awadni" initiative to encourage reporting fugitive support workers, pointing out that many people were surprised by a call to obtain compensation of 10,000 dirhams after the fugitive workers were caught working for others.

He added that it is necessary in the event of canceling the residency of any of the support workers, or returning them to the employment offices of those categories, to follow up on what happens to the maid who returned them to the office. The first sponsor incurs a fine of 50,000 dirhams, as it is considered to be working for someone else without being informed of it.

He pointed out that some sponsors do not cancel the residence of the support category registered to them despite their work for others, due to laziness or lack of knowledge, which exposes them to a fine, such as a citizen with a business project who was subjected to a fine of 100,000 dirhams because of the work of two of his employees for another person, and it was found that he does not have to They are aware of this, but they do it with the knowledge of an Asian manager who handles the business of this citizen, pointing out that many Emiratis make this mistake.

A family fined for not following up on its maid

The head of the First Prosecution Office of the Nationality and Residency Prosecution in Dubai, Faisal Ahli, said that a family brought a maid to work under her sponsorship, and then returned her for incompetence to the employment office after a period of use, but she did not follow up what happened, and after two years she discovered that she works for a family, but she is still under sponsorship. The first family was fined 50 thousand dirhams.

The compensation shall be deducted from the fine of persons who hired maids or laborers without their sponsorship.

Compensation comes in the case of reporting within 10 days of the escape and after arresting the fugitive labor with another person.