Russia and Belarus conduct live-fire exercises near Ukraine, and Beijing supports Moscow in its conflict with the West

Forces from Russia and Belarus conducted live-fire exercises near the borders of Ukraine, at a time when Moscow and the West exchange accusations of escalation, while China announced its support for Russia in its current conflict with the West. 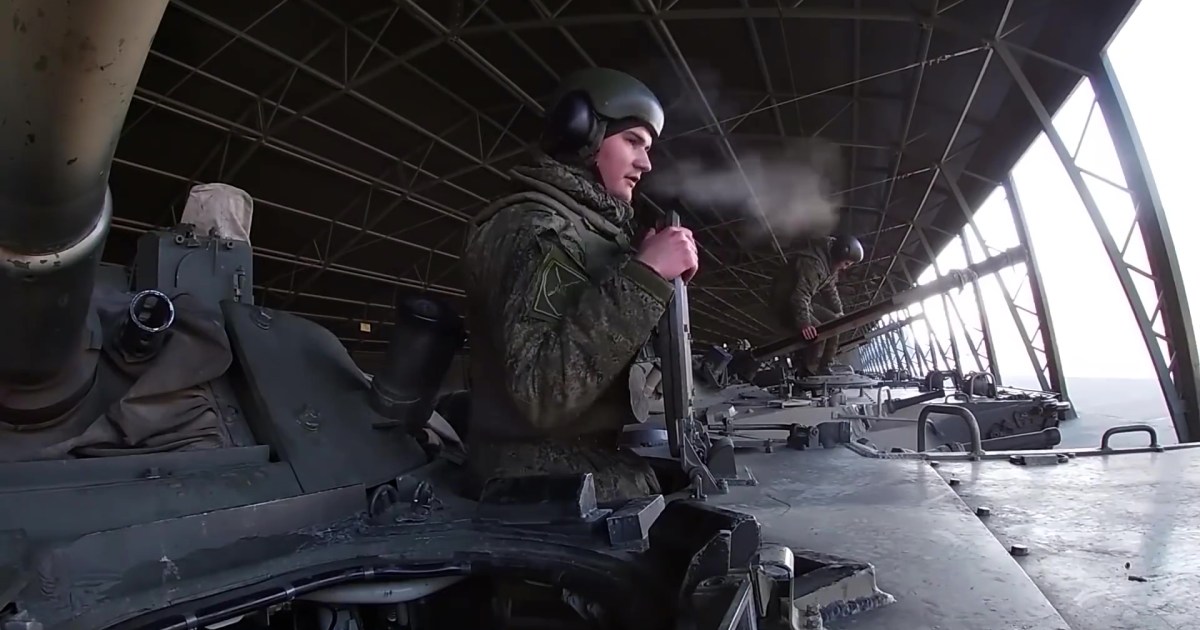 Forces from Russia and Belarus conducted live-fire exercises near the borders of Ukraine, at a time when Moscow and the West exchange accusations of escalation, while China announced its support for Russia in its current conflict with the West.

Belarusian Defense Minister Viktor Khrinin published pictures from the exercises showing soldiers parachuting on the ground, fighter planes in the sky, soldiers disembarking from helicopters with their weapons, and tanks firing and making maneuvering moves.

These exercises at the Brest military base in western Belarus - close to the borders with Ukraine and Poland - precede joint exercises between Russian and Belarusian forces between February 10-20.

Russian Defense Minister Sergei Shoigu, who is currently visiting Belarus, was briefed on the ongoing preparations for launching joint military exercises between the two countries, which will be launched in Belarus next Thursday. Later, the Russian Minister met with Belarusian President Alexander Lukashenko.

Reznikov stressed that his country was not planning any provocations against Belarus, and Kiev had denied Minsk's accusation of infiltrating Belarusian airspace with a drone.

The Ukrainian Defense Minister said that the number of Russian soldiers on the borders of Ukraine, including Belarus, and what he described as the temporary occupied territories in the Crimea and the Donetsk and Luhansk regions, is currently estimated at about 115,000.

In this context, Reznikov announced the arrival of an American shipment of weapons to the capital, Kiev, which is the seventh shipment within two weeks and the third in the past 24 hours.

He explained that it consists of 85 tons of weapons, ammunition and grenade launchers, and described the arrival of the shipment as good news, saying that sending weapons to Kiev must continue.

He explained that the amount of weapons received by Kiev from Washington amounted to about 600 tons, including "Javlin" anti-tank missiles, and he talked about Kiev receiving ammunition and weapons from Britain, including "In-Low" anti-armor missiles.

Simultaneously, the Secretary-General of the North Atlantic Treaty Organization (NATO) Jens Stoltenberg said - yesterday, Thursday - that large movements of Russian forces towards Belarus have occurred in the past few days.

Stoltenberg added that Russia's military deployment near Ukraine was the largest since the Cold War.

The United States and its allies say that Russia has massed about 100,000 soldiers, reinforced with armored vehicles and missiles, on the borders of Ukraine, in preparation for attacking the latter.

But Moscow denies this and considers it pure propaganda, and accuses the West - in return - of threatening its security by expanding eastward by seeking to include Ukraine in NATO.

In this context, Russian presidential spokesman Dmitry Peskov accused - on Thursday - the United States of inflaming tension by deploying several thousand of its soldiers in Eastern Europe.

The New York Times, citing senior US officials, reported that Washington had obtained intelligence that indicated a Russian plan to fabricate a pretext for the invasion of Ukraine.

It quoted that the United States hopes to thwart this plan, which, according to the newspaper, includes depicting a "fabricated attack" by Ukrainian forces on Russian territory or against Russian speakers in eastern Ukraine.

The officials - who were quoted by the New York Times - added that Moscow intends to use the video to accuse Ukraine of committing genocide against Russian speakers and to justify an attack, or as a platform for separatist leaders in the Donbass region to call on it to intervene.

The Pentagon also said it believed Russia would produce a propaganda video that included the bodies of people, actors and pictures of destroyed sites.

Meanwhile, China preempted a meeting between Chinese President Xi Jinping and Russian Vladimir Putin - on Friday, ahead of the opening of the Winter Olympics in Beijing - by affirming its support for Russia in its current conflict with the United States and NATO.

After talks between Russian Foreign Minister Sergei Lavrov and his Chinese counterpart, Wang Yi, the Chinese Foreign Ministry said that China expressed its understanding and support for Russia's position on the security front regarding Moscow's relationship with the United States and NATO.

The ministry added that during their meeting in Beijing on Thursday, Lavrov and Wang discussed the crisis of Ukraine, North Korea and Afghanistan and coordinated their positions.

The Chinese Foreign Ministry added that the Chinese and Russian ministers jointly opposed the "politicization" of sports, and any attempt to create confrontations between international camps and blocs.

In other diplomatic developments, Al-Jazeera correspondent in Kiev reported that Ukrainian President Volodymyr Zelensky made a phone call to French President Emmanuel Macron on Thursday.

Zelensky said - through his account on Twitter - that dialogue is continuing with Macron to confront security challenges and intensify the peace process within the Normandy format.

For its part, the Kremlin announced that Russian President Vladimir Putin had a telephone conversation - the third in a week - with his French counterpart Emmanuel Macron, at the initiative of the French side.

The Kremlin said that in their contact, the two presidents continued the substantive dialogue on the situation in Ukraine and issues related to the Russian initiative to develop long-term legal guarantees for Russia's security.

In Kiev, Turkish President Recep Tayyip Erdogan affirmed - yesterday, Thursday - his country's support for the sovereignty and territorial integrity of Ukraine, including the Crimea.

In a press conference with his Ukrainian counterpart, Erdogan expressed his country's readiness to host talks between Ukraine and Russia to resolve the crisis.

On the other hand, US Secretary of State Anthony Blinken signed Thursday in Washington with his Slovak counterpart Ivan Korchok a defense cooperation agreement between the two countries.

Blinken said - during the signing ceremony - that this agreement will make it easier for the armies of the two countries to coordinate on defense efforts, such as conducting joint exercises, and will pave the way for the United States to support Slovakia's efforts to raise the level of its defense capabilities.

For his part, Slovak Foreign Minister Korchok said that the US presence in Europe is vital, and stressed the readiness of NATO to enter into a real dialogue with Russia to seek constructive results, as he put it.