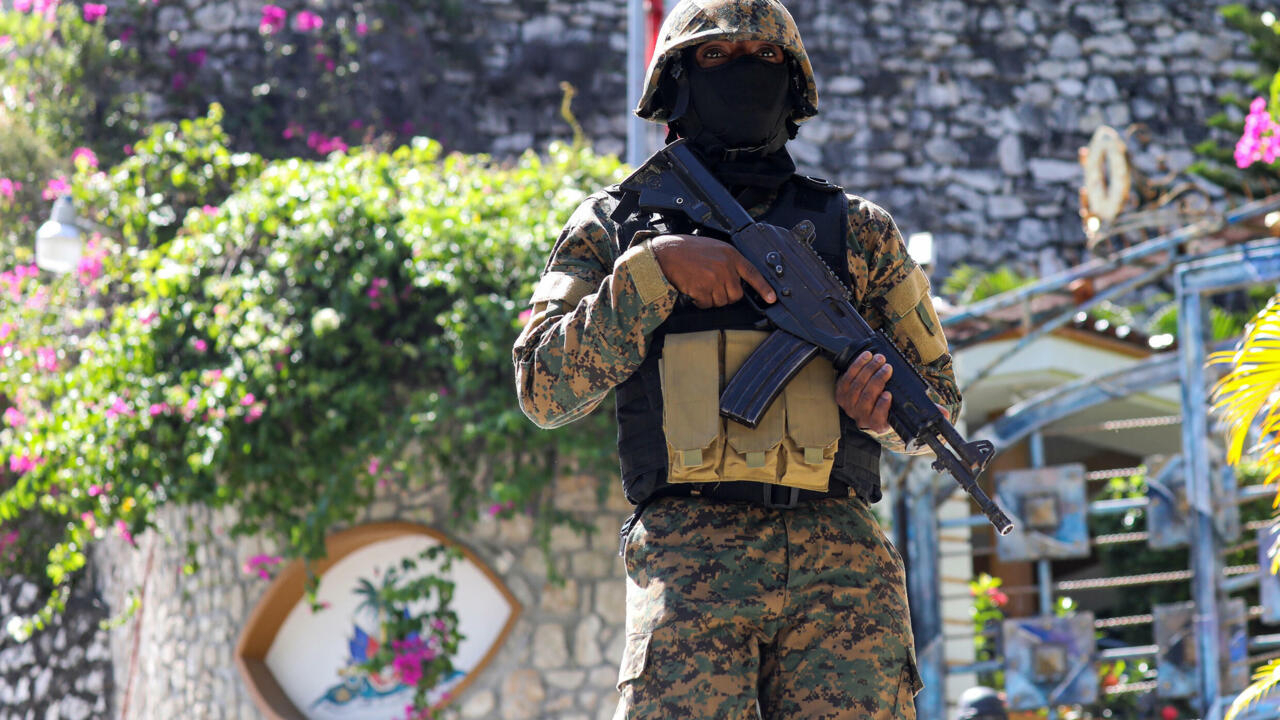 A Haitian policeman stands guard outside the presidential residence in Port-au-Prince, Haiti, after the assassination of President Jovenel Moise on July 7, 2021. (Illustrative image) VALERIE BAERISWYL AFP/File

The national police have been placed on high alert throughout Haiti from tomorrow until February 10 inclusive.

The announcement was made yesterday by the new director of the national police, Frantz Elbé.

This provision is made as February 7 approaches, the date on which the mandate of the late President Jovenel Moïse should have ended, recalls

And it is therefore on this date that the mandate of the current interim Prime Minister, Ariel Henry, should also end, believe part of public opinion and a fringe of the Haitian political opposition gathered behind various agreements of out of crisis.

But the current head of government does not hear it that way.

What will happen on February 7?

In the columns of the

The Catholic Church, for its part, calls on all political actors to “

a broad consensus to get the country out of the crisis

It is about our survival as a people

,” warns the Haitian Episcopal Conference in the newspaper

Minneapolis police conducted an operation in which a young black man was killed.

The video, captured by a police officer's body camera, was released last night by city authorities.

This case revives the debate around search warrants called “no-knock” – in French “without knocking”.

reports: the police enter an apartment with a key, announce their presence, move towards the living room where a man is lying on a sofa.

The individual straightens up slightly, a weapon in his hand and a policeman opens fire.

Minneapolis authorities said the call was requested by police in nearby Saint Paul as part of a homicide investigation.

the name of Amir Locke did not appear on the search warrant.

And the apartment in which he was killed was not his

Also according to the

had no criminal history.

This case therefore revives the debate on the use of so-called “no-knock” search warrants.

This practice has been banned in several American cities because "

these police operations have resulted in the death of innocent civilians

Minneapolis restricted this practice in 2020, and only uses it occasionally

The famous lawyer Benjamin Crump, who has already pleaded the cause of the George Floyd family, also killed in Minneapolis in 2020, demanded yesterday, for the umpteenth time, "

the black Americans can sleep safely in their beds at night

New in the case of the mysterious "

" which has struck diplomats and American soldiers around the world

As a reminder: the victims suffer from headaches, nausea, dizziness, and even neurological damage.

” – or HAIs as experts call them, were first reported in 2016 among American and Canadian diplomats stationed in Cuba, hence the name “

”, before to be reported elsewhere in the world, such as in China, Germany, Russia and Austria.

A group of American experts, mandated by American intelligence, published a report.

And his conclusions are staggering: “

Specialists have looked into all the cases listed.

In two dozen victims, the symptoms observed cannot be explained by medical or environmental causes,

The experts have concluded that it is electromagnetic waves, emitted at a short distance, which could be the cause of the symptoms observed.

Haiti: the opposition chooses an interim president and prime minister

Headlines: Elections in Haiti rejected by the Prime Minister