“Relay of US initiatives”: why the head of the EC threatened the Russian Federation with sanctions against Nord Stream 2

The launch of the Nord Stream 2 gas pipeline will depend on Russia's actions, said the head of the European Commission, Ursula von der Leyen. According to her, the Russian Federation is exerting “military pressure” on Ukraine and allegedly using gas supplies to influence the EU, therefore, in the context of sanctions against Moscow, Nord Stream 2 should also be on the agenda. Von der Leyen also added that Brussels is actively looking for alternative sources of energy supplies. According to experts, the head of the European Commission promotes the idea of ​​sanctions against the pipeline and deliberately links the gas issue with the Ukrainian problem, as he follows the course of Washington. 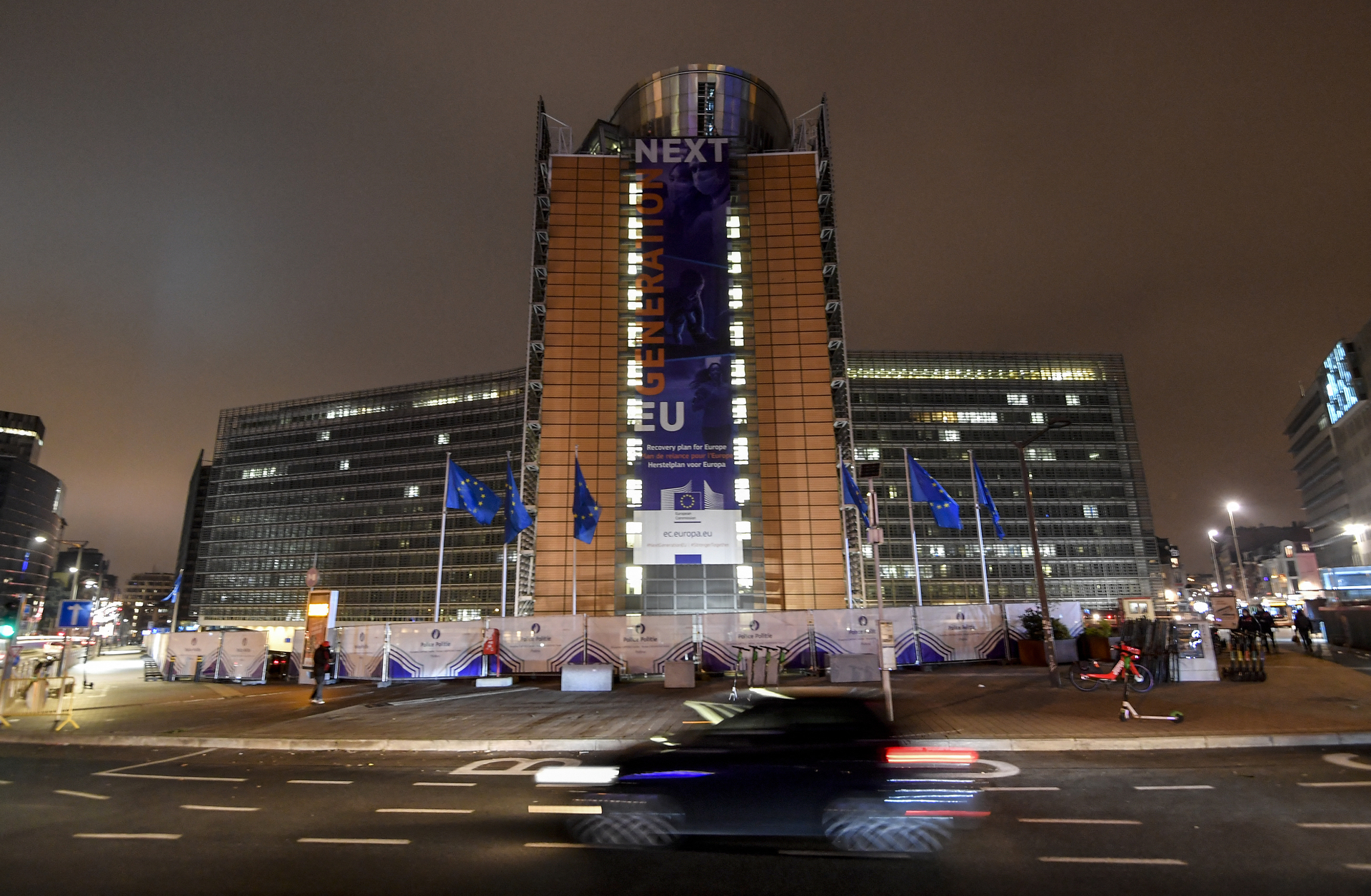 The commissioning of the Nord Stream 2 pipeline will depend on Russia's actions.

This was stated by the head of the European Commission Ursula von der Leyen in a joint interview with the newspapers Les Echos and Handelsblatt.

“In the current crisis, it will depend on the behavior of Russia.

Things are strange in Gazprom.

When gas prices break through the ceiling, and demand is very high, the company limits its customers.

Russia is putting military pressure on Ukraine and using gas supplies as a means of pressure on us.

Therefore, in the context of sanctions (against Moscow.

), Nord Stream 2 should also be on the agenda, this is obvious, ”she said.

As von der Leyen explained, it is clear to the EU that “any further military escalation by Russia” will have “enormous consequences.”

“We have prepared a massive and comprehensive package of financial and economic sanctions,” she said.

At the same time, the politician ruled out the possibility of a shortage of gas supplies to Europe in the event that Gazprom and Russia "keep their promises on supplies."

She also added that Europe is "very actively" working to "find new sources of energy."

According to von der Leyen, she, together with US President Joe Biden, developed a project for a strategic partnership in the energy sector.

“We are talking primarily about liquefied gas, the so-called LNG.

We are negotiating with a large number of different suppliers around the world.

Many countries are interested in establishing good, long-term cooperation with Europe.

Europe itself wants reliability and offers it,” said the head of the European Commission.

According to her, in addition to the United States, the EU is negotiating gas supplies with Norway, Qatar, Azerbaijan and Egypt.

It is worth recalling that Qatar, one of the leading gas exporters in the world, has previously stated that no country will be able to cover the energy needs of Europe in the event of a shortage of blue fuel, which allegedly may arise due to the situation around Ukraine, without affecting supplies to others. regions.

This statement was made on February 1 by Qatari Energy Minister Saad al-Kaabi during a video conference after a meeting in Doha with EU Energy Commissioner Kadri Simson.

“No one can unilaterally replenish the volume of gas that the EU needs without affecting supplies to other regions of the world,” Saad al-Kaabi was quoted by Reuters.

A little later, on February 3, Bloomberg reported that Washington and Brussels asked a number of Asian countries, in particular Japan, to organize gas supplies to Europe in the event of a conflict in Ukraine.

Commenting on this information, the Japanese Minister of Economy, Trade and Industry, Koichi Hagiuda, has already stated that the government will consider the possibility of organizing such supplies.

At the same time, Moscow ruled out a scenario according to which it could allegedly fail to fulfill its obligations to export gas.

As Vasily Nebenzya, Permanent Representative of the Russian Federation to the UN, recalled, Russia is a reliable supplier and has never let down partners.

When asked whether Moscow guarantees that it will not stop the supply of blue fuel, the permanent representative stressed that the Russian Federation has never said otherwise.

In turn, Russian Ambassador to Germany Sergei Nechaev said in an interview with N-TV that not once in the history of Russian-German energy cooperation has Moscow given reason to consider it an unreliable supplier.

He also noted that consumers in Germany will no longer have to buy gas at such high prices if Nord Stream 2 is put into operation.

Meanwhile, among the German establishment, calls for the commissioning of Nord Stream 2 do not subside, as this will bring obvious economic benefits to the country.

In particular, an expert on economics and energy issues of the Alternative for Germany faction in the Bundestag, a member of the parliamentary committee on climate protection and energy, Steffen Kotre, told TASS that using Nord Stream 2 as a means of pressure on Russia would be "extremely stupid decision" from the point of view of energy policy and "would needlessly cause foreign policy harm."

“The reverse would be correct: the launch of Nord Stream 2 could become such an urgently needed signal of détente.

Abandoning Nord Stream 2 would be a stupid detriment to our own economy,” Cotre said.

According to him, a reliable energy partnership has been formed between Russia and Germany, which has existed for decades, "including in difficult times," and it is "useful for both sides."

“The use of energy carriers as a political weapon would be exactly what the German government and the US administration accuse Russia of and for which they threaten with sanctions,” the parliamentarian noted.

Earlier, on January 22, Bavarian Prime Minister Markus Söder, in an interview with the German newspaper Frankfurter Allgemeine Zeitung, said that measures to stop the Nord Stream 2 project or to stop all gas supplies from Russia would negatively affect Germany.

“Constant new threats and increasingly harsh sanctions against Russia cannot be a solution in and of themselves.

On the one hand, because the sanctions have had little effect for a long time, and on the other, because these new sanctions often harm us in the same way,” Söder said.

From the point of view of experts, Brussels deliberately touts the idea of ​​sanctions against Nord Stream 2 and mixes the gas issue with the Ukrainian issue, following directives from Washington.

“Von der Leyen is promoting American interests in many ways.

The head of the EC is fond of political rhetoric and thinks of himself not as the head of the European Commission, who manages the processes within the EU, but as a kind of think tank of Euro-Atlantic policy.

Hence such a desire to please Washington, ”said Vladimir Olenchenko, senior researcher at the Center for European Studies at IMEMO RAS, in an interview with RT.

In his opinion, the idea of ​​the head of the EC to organize gas supplies to the EU from Norway, Qatar, Azerbaijan and Egypt, most likely, was generated in the United States.

“The idea to replace Russian gas with fuel from other countries was born in Washington.

In particular, US Secretary of State Anthony Blinken said something similar back in January.

In this case, von der Leyen acts only as a relay for such initiatives,” the analyst believes.

At the same time, he is sure that such an initiative is a priori doomed to failure.

“Gas supplies to Europe from a company such as the Norwegian Statoil, if possible, will be in extremely limited quantities and at an increased rate.

This is much more expensive than Russian gas.

Qatar, on the other hand, has contracts signed for many years to come, and they are aimed at Asian countries, and not at Europe, ”the expert explained.

In turn, Alexei Grivach, Deputy General Director for Gas Problems of the National Energy Security Fund, in an interview with RT, called plans to organize alternative gas supplies to Europe "an unsuccessful idea."

“Even if one of these countries agrees to such an adventure, it will give the EU little.

Due to such measures, it is only possible to increase imports in the short term, and even then only slightly, since the gas infrastructure of these countries is currently operating at its limit,” says Grivach.

He also believes that the United States, which has now allegedly begun to produce gas for the European market around the world, is unlikely to increase its LNG supplies to the EU, since it is much more profitable for them to send liquefied gas to Asia at higher prices.

In addition, from his point of view, with his statements about negotiations on gas supplies from other countries and about sanctions against Nord Stream 2, the head of the European Commission wants to show that Europe can supposedly do without Russian blue fuel.

"However, this is not the case.

At the same time, Russia is not going to refuse to fulfill its obligations under contracts and fully implements them, ”the analyst stated.

In his opinion, Europe, in the context of the energy crisis, should move away from futile negotiations with other countries on gas supplies and concentrate on accelerating the launch of Nord Stream 2.

“The EU industry suffers greatly from high gas prices, and, of course, Germany first of all as the main industrial center of the union.

Europe needs Russian gas, the prices of which are extremely favorable.

At one time, it was precisely for this reason that they began to build Nord Stream 2, which could become a lifesaver for the European economy,” Grivach concluded.