Ramoncín, the father of Lingo explains Wordle's success: "it's a hell of a format" 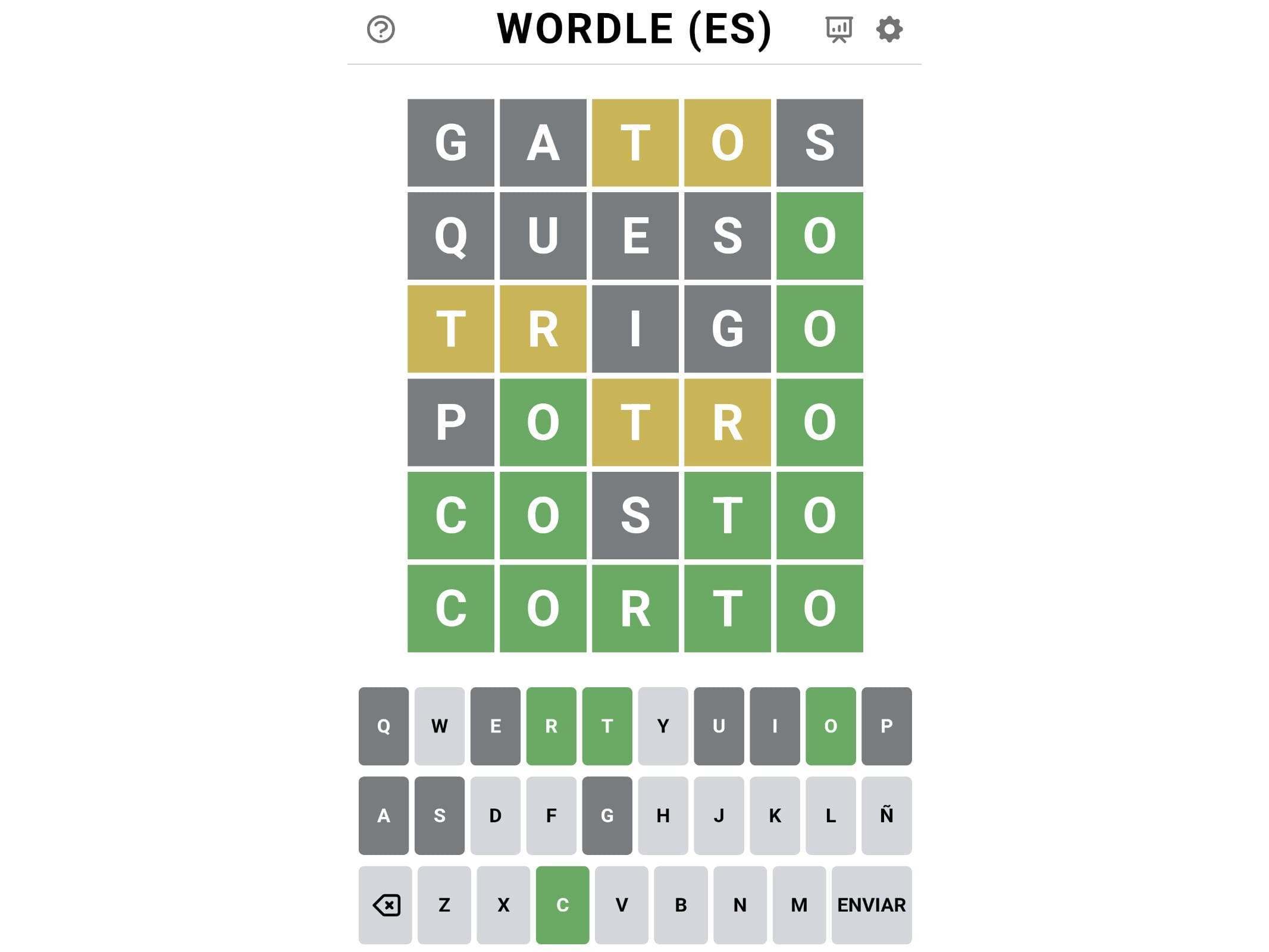 It doesn't matter if it's in Madrid, London, New York or Kiev. When the hands of the clock pass from 11:59 p.m. to 12:00 a.m., hundreds of thousands of people share an identical ritual: they open their mobile phones, type "

. Whether they succeed or not (there is only one word to guess per day) they will have to wait until the next day to play again.

Players must use words found in the dictionary and after the first attempt (which they must do "blindly") the game will indicate in yellow the letters present in the word but in an incorrect position, in green the characters that are find in the appropriate position and in gray those that are not in the word to guess.

In this way the player will have up to

due to its uncanny resemblance to

, the popular television game show imported to Spain in the 1990s that was hosted by José Ramón Martínez Márquez, better known by Ramoncín.

An example of a Wordle game.

In gray, the letters that are not included in the word.

I am very happy that it is fashionable

. It makes me very excited and brings back very good memories," confesses the singer.

"From what I've seen, it's practically the same as

. The same tricks are used to guess the words and the dynamics are very similar," he recalls.

However, the great pull of

worldwide does not catch him by surprise.

"When I presented the program on La 2 de Televisión Española, it was a tremendous success:

we had more than 2 million viewers

and many nights we surpassed the 1 newscast in audience, with which we competed in time slots," he explains.

was a milestone in the history of Spain at the beginning of the 90s. In addition to our country, it was broadcast through the international TVE channel.

"Guiris would stop me in the street abroad, they would ask me if I was the presenter and they would tell me that they used the program

Despite the resounding success in our country,

was an international phenomenon.

It was created in 1987 by presenter Ralph Andrews and after a single season in the US it made the leap to the BBC, Germany and the Netherlands, from where the production company where Ramoncín works bought the rights.

the story of his little brother,

, has been even more dizzying

, a arises as part of a love story

in the fall of 2021. As a detail that the programmer Josh Wardle (Brooklyn, New York) wanted to have with his girlfriend, fond of puzzles and word games.

For this reason, he baptized him as

, a mixture between his last name and the word

For weeks she was the only player.

Later the couple began sharing the link to the

page in WhatsApp groups of friends and family and

by word of mouth.

From here, came the explosion.

In December, seeing the game keep growing, Josh (who doesn't get paid for

and works as a programmer on Reddit, the biggest forum on the internet) decided to include a "share results" button in what you see (only using the colors green, yellow and gray but without revealing the word to guess) how it has been solved and how many attempts the player has needed to solve the riddle of the day.

A change that helped catapult the game's fame.

The first week of January already had 300,000 daily players

Currently, according to a survey published in the US, it has more than 45 million players for its English version alone.

As happened with Lingo,

's popularity triggered its versions in other languages: Spanish, French, English, Russian... and "many people use it to practice other languages ​​because

it helps you with vocabulary

"I play every day. First the English version, then Spanish and sometimes German," says Víctor, one of the first players in Spain who discovered

thanks to his relatives in the US.

“I started when there was only an English version and I got hooked. Now I play even if I'm having a drink with

A ritual very similar to the one that Ramoncín remembers during the experiments he did with Lingo before starting broadcasts on La 2. "I wanted to know if it was fun, so I started testing with friends and family. I would meet them in a bar and I put them to play on napkins. The game has something special.

People loved it, they got itchy and always wanted to play another game

. Then I did the test with children and they loved it too, "he recalls.

However, the Lingo (meaning slang in English) from Spain was different from the Dutch version.

"We bought the television rights from them but in the programs there they were idiotic with a man talking. I took what I had learned with my friends and wanted

to give it a more casual point

, but also more cultural and educational" he recalls.

"However," he clarifies, "the same thing happened today: people got hooked on playing with words."

THE RECIPE BEHIND THE SUCCESS

But, what is the secret that makes these types of games raze?

"The format is amazing," Ramoncín summed up emphatically

"It's a game that has never gone out of fashion under different names," he adds.

Something on which experts in the field of video games consulted by LOC agree and put forward other reasons such as that it is free,

that it has no advertising, and that you can only play once a day

, which prevents people from getting burned.

However, they cast a doubt in the air: "The mystery is how long the

, the doubt is resolved: more than 30 years.

"The program was still a success in 1996 but

. We had to send a burofax and everything. In the end they paid us but they purged us", he laments.

However, in the mid-2000s there was a rerun on TV in Castilla La Mancha (also with Ramoncín) and, for three months, Canal Sur has been broadcasting a rerun presented by Ana Ruz and sponsored by the singer.

What will happen to the

Music The singer-songwriter Carlos Luengo, singer and composer of mythical songs from the 70s and 80s, dies

TrendThe rise of 'true crimes': where is the ethical border between journalism and pure entertainment?