Several demands to call in a defense committee - Andersson: "May think" 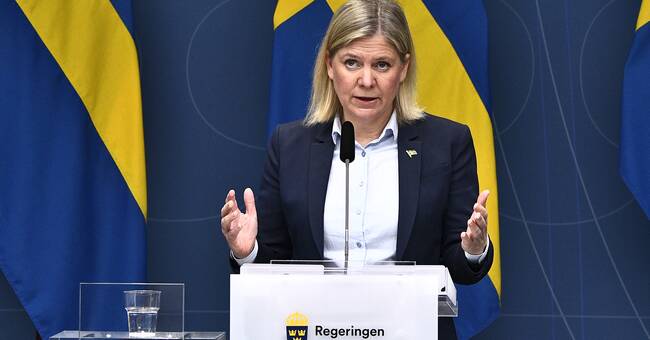 The message came after she had a meeting with the party leaders about the security policy situation.

The background is the Russian threat to Ukraine and the Russian security policy demands on NATO and the United States, including that NATO should not admit new members.

- It was a constructive meeting and we have had a good dialogue.

There was a clear sense of responsibility in the room, where the parties want to show gathering, Andersson says.

The National Security Strategy is a public document that addresses a number of different types of threats, such as military threats, climate threats, health threats, terrorism and energy supply.

The current strategy was presented in 2017 and it will be renewed every five years.

Work on a renewed strategy is ongoing and now all parliamentary parties will be invited to have views on it.

- The government takes very seriously the confrontational rhetoric from Russia and the increased military activity along Ukraine's border and also the demands that Russia has made regarding the European security order, says Magdalena Andersson.

During Wednesday's meeting, a number of parties demanded that the Defense Committee be recalled - but the Prime Minister did not want to give such a message.

- It is not in exactly what form the conversations are conducted that is important.

But what is important is that we can have a dialogue in Sweden and show a consensus to the outside world.

The Defense Committee is a forum for consultations between the government and representatives of the Riksdag's parties on security policy and defense policy.

KD leader Ebba Busch wants the Defense Committee to produce a new report on the security policy situation, which should be the basis for an update of the defense decision from 2020.

Busch believes that the Armed Forces may need to be provided with additional funds.

M-leader Ulf Kristersson thinks that there are good reasons to review whether Sweden is sufficiently equipped to meet a rapidly escalating situation.

The M-leader does not think it can be ruled out that the defense needs more money to bring forward planned investments.