Homemade font: SK opened a criminal case into the death of a woman in an ice hole in the Leningrad region

The Investigative Committee opened a criminal case on causing death by negligence after the death of a woman in an ice hole on January 19. The tragedy occurred in the Leningrad region in front of the spouse and children of the deceased. The Gatchina diocese specifies that the font on the Oredezh River was not authorized by either the authorities or the church. Volunteer rescue teams continue to work on the spot, but the body has not yet been found. 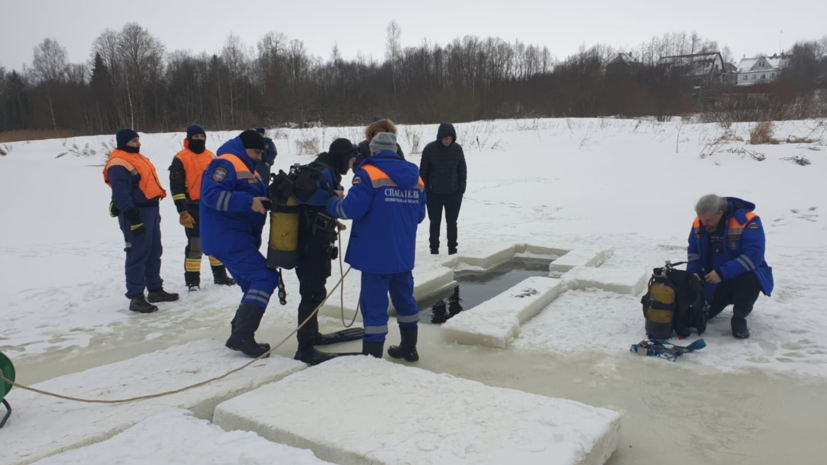 In the Leningrad region, a criminal case has been initiated on the fact of causing death by negligence (part 1 of article 109 of the Criminal Code of the Russian Federation) as a result of the death of Anna Uskova.

The woman died on January 19, 2022, disappearing without a trace after jumping into a makeshift font.

“The initial investigative actions established that on January 19, 2022, a woman born in 1981 independently jumped into a makeshift ice hole located on the Oredezh River in the village of Vyra, Gatchinsky District, Leningrad Region, and went under water,” the official statement of the regional Investigative Committee of the RF IC says.

The investigation has not yet been able to identify the persons involved in the tragedy.

“We opened a case for a full and comprehensive investigation to assess the actions of the administration: were they aware of the existence of this hole?”

- RT was told in the press service of the regional department of the UK.

Disappearing under the ice

Anna Uskova drowned in front of her husband and children.

The dive was filmed - a woman crosses herself and jumps headlong into the hole.

A second later, a man standing nearby shouts: “Gone, guys!

Husband Uskova throws herself into the water, but the woman has already been swept away by the current.

The first days rescuers of the Ministry of Emergency Situations worked on the spot, but the body was never found.

On January 22, Uskova's relatives asked for help from the rescue team of the Dobrotvorets diving group, which had the first accident in 2022.

On January 24, rescue volunteers from Moscow and Ivanovo quickly arrived at the scene and have been trying to find the woman's body for the second day.

They were joined by the search teams "Liza Alert" and the diving service VOSVOD.

They operate with two RovBuilder ROV complexes and underwater cameras with infrared illumination.

If the body is not found, then in the evening our specialists from Moscow and Ivanovo go home, since we are volunteers and they have their own work.

In the near future we will try to assemble a new group, ”the Dobrotvorets press service told RT.

The search is really hard.

The flow of the river is very fast.

In addition to the current, there are snags and dumps, which greatly complicate diving operations.”

Also on russian.rt.com The case was initiated after the death of a woman in an ice hole in the Leningrad region

The representative of the Gatchina diocese, Alexander Asonov, emphasizes that the font on the Oredezh River was not agreed upon by the church.

“The font was self-made and was a private initiative of the people who participated in it.

Who did it and why, I don’t know, ”Asonov noted in a conversation with RT.

According to him, the sanctioned font was nearby, at the temple in the village of Rozhdestveno.

“This font is fully prepared and equipped.

During preparation, the depth of the font, the thickness of the ice, what the flooring and railings will be calculated so that the person who descends into the font, if he becomes ill, remains fixed, ”said the representative of the diocese.

According to him, Epiphany bathing is always coordinated with government agencies in advance.

“For one and a half to two months, discussions are held with representatives of the Ministry of Emergency Situations, the police and doctors.

Failure to comply with safety requirements

The Dobrotvorets rescue team emphasized that in winter, volunteers most often look for fishermen and children who have fallen through the ice - neither of them follow safety rules.

Earlier, the media found out that Anna Uskova was seriously engaged in swimming.

At the school of the Olympic reserve SOSHR No. 3 "Nevskaya", where Uskova probably studied, they refused to comment on the tragedy.

According to media reports, the woman left two children: a ten-year-old son and a 14-year-old daughter.

Uskova worked as a lawyer in a bank in St. Petersburg.

“This accident, of course, is a terrible tragedy.

I would like to express my deepest condolences to the family and friends of the deceased, ”concluded the representative of the Gatchina diocese of Asons.