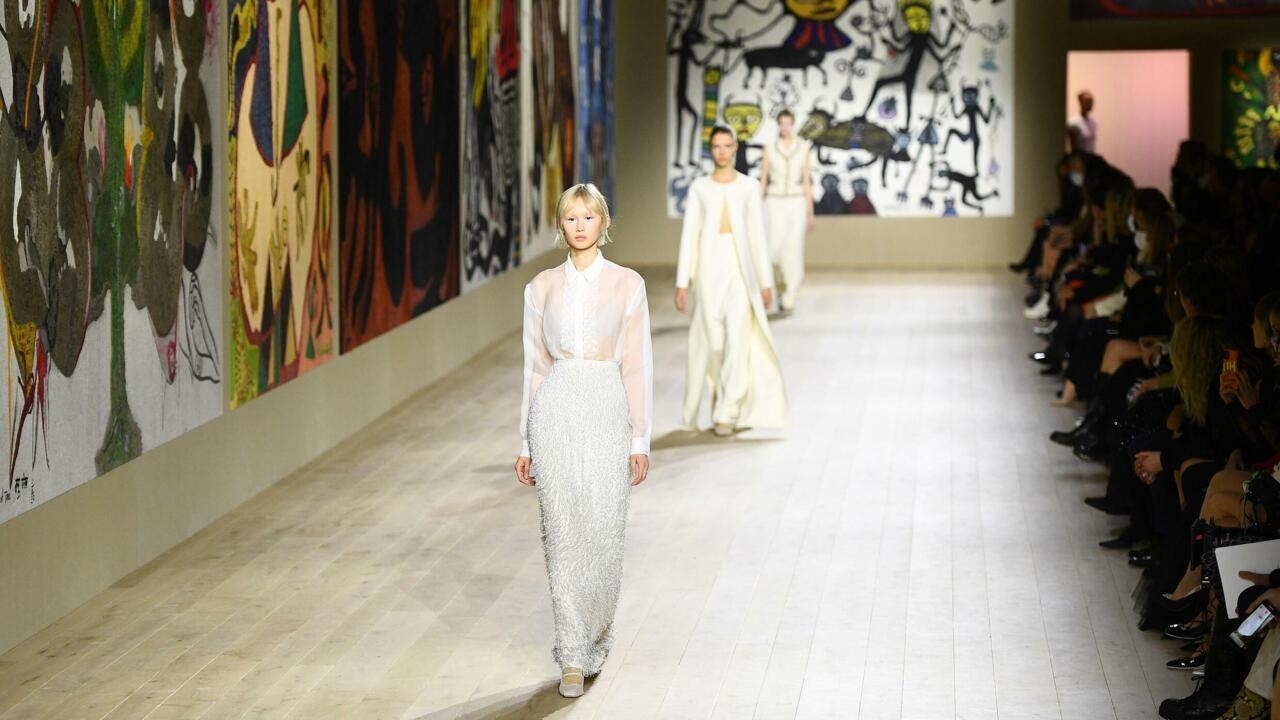 "I'm obsessed with embroidery, it's very personal, I'm Italian, part of my family lives in the south, I've seen women embroidering all the time, my grandmother, my aunts, my mother. .. I've always been fascinated, it's a whole language through which women express themselves," said Maria Grazia Chiuri, artistic director of women's collections at Dior.

This obsession is reflected in the ubiquity of embroidered pieces - tights, jerseys, socks and shoes - and in an innovative approach: the dresses are not embellished by embroidering them, they are designed entirely by embroidery, practically without seams.

After the last very colorful ready-to-wear collection, this one is largely available in shades of white and gray.

The extremely sophisticated embroideries are also monochrome, with lots of tone on tone.

The silhouette is longer and simpler, moving away from the curved line of Dior towards more purity.

The jackets without linings are treated in "double face", a technique consisting in opening the first fabric and inserting the other inside, also echoing that of embroidery.

The sober palette of the dresses contrasts with the exuberance of the multicolored and saturated decor at the Rodin Museum, where the parade takes place which highlights and brings together French and Indian craftsmanship.

The decoration reproduces in embroidery works by the couple of Indian artists, Madhvi Parekh and Manu Parekh, highlighting the male/female dichotomy.

This is the third time that the decor for Dior's haute couture shows has been produced by the Chanakya school in Bombay (India) where young women learn embroidery, a rare thing in a country where this craft is passed down from father to son. .

These collaborations are part of Maria Grazia Chiuri's feminist approach.

She initially planned to bring the embroiderers to Paris for the parade, a project prevented by the health context.

“It is an honor for them to have this international visibility,” Karishma Swali, founder and director of the establishment, told AFP.

At the end of an 18-month training, they thus implement what they have learned.

It's an amazing opportunity that they couldn't even dream of."

The installation at the Rodin Museum, which will be open or public the week following the show, was made by 380 embroiderers over 3 months.

One more way for Maria Grazia Chiuri to prove that craftsmanship is an art and that haute couture is an international cultural project.

Many pieces from the collection are also embroidered in the Chanakya school.

"It is very important to talk about craftsmanship, it is crucial for haute couture. We must show the link between artistic and artisanal work, the latter being considered less important in certain countries" such as Italy or Italy. India, she points out.

For Maria Grazia Chiuri, this reflection has become vital since the pandemic.

"No one yet knows how many companies will not survive the crisis and how many creative capacities will be lost. They are not easily replaceable workers. It is a priority for Dior to support them", she concludes.