Palestinian sources in Jerusalem said that the city's deputy mayor and settlers stormed this morning the Sheikh Jarrah neighborhood and beat the citizens, while settlers attacked Israeli solidarity with Palestinian farmers in the West Bank. 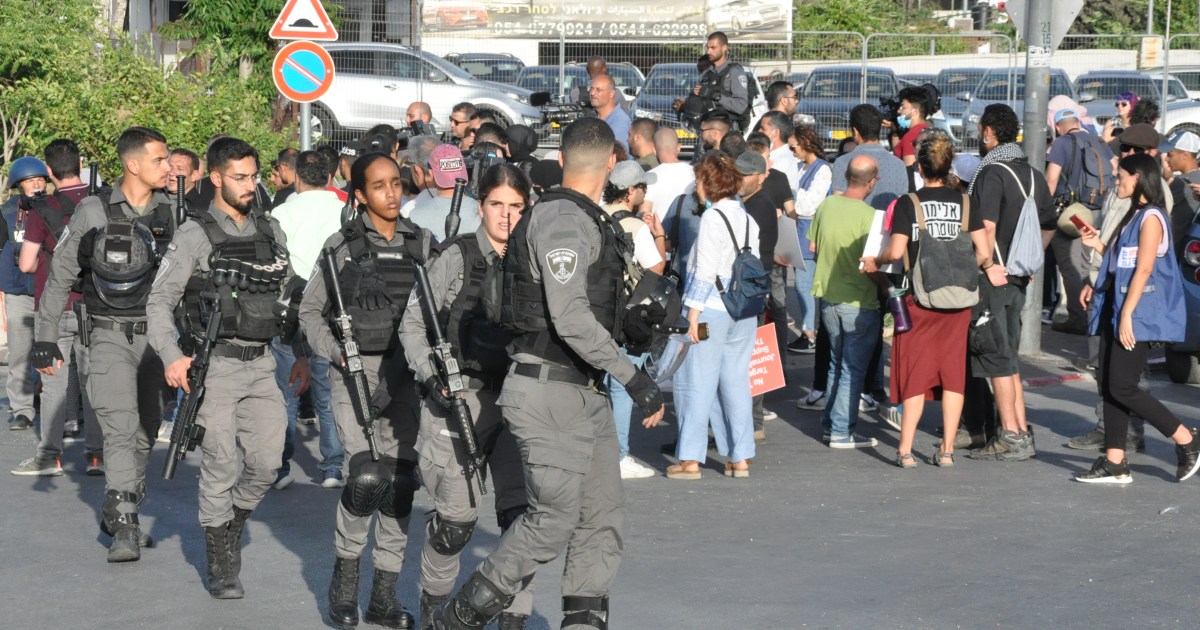 Palestinian sources in occupied Jerusalem said that the deputy mayor of the city and settlers stormed this morning the western neighborhood of Sheikh Jarrah, and beat the citizens in front of the occupation soldiers, and the occupation police attacked protesters against the decisions to evacuate Palestinian homes in the neighborhood, while settlers attacked the solidarity activists Israelis with Palestinian farmers in the northern West Bank.

Palestinian sources said that Aryeh King, the deputy mayor of occupied Jerusalem, assaulted a woman in the Sheikh Jarrah neighborhood, adjacent to the Temple Mount, with beatings, resulting in a fracture of her hand.

Anadolu Agency reported that the Israeli police assaulted today, Friday, Palestinians and Israeli and foreign peace activists, who protested against the decisions to evacuate homes in Sheikh Jarrah neighborhood in favor of settlers.

The police attacked the Palestinians and the activists when they tried to remove a fence that settlers had set up, earlier on Friday, near the house of the Salem family, who are threatened with displacement from their house where they have resided since before 1948. The police used force to remove the activists from the land, and arrested a number of them.

Settler groups have been trying since the seventies to remove the Salem family from their home, and the Jerusalem neighborhood is one of the most targeted Palestinian neighborhoods in East Jerusalem by settlers.

Hundreds of Palestinians and Israeli and foreign peace activists arrived today in the Sheikh Jarrah neighborhood to organize the weekly stand in solidarity with the residents of the neighborhood. neighborhood families.

In the West Bank, the Palestinian Red Crescent said that 10 Israeli solidarity activists were injured and fractured after settlers attacked them in the village of Burin, south of Nablus, in the northern West Bank.

The attack came after the solidarity activists participated in an event to plant seedlings of olive trees in the village with Palestinian residents, and to support Palestinian farmers whose lands are threatened with confiscation by the occupation authorities.

The Palestinian Red Crescent treated 8 of the wounded, while two others were handed over to the Israeli ambulance. Settlers set fire to a Palestinian vehicle in the area.

And video footage published by the "Rabbis for Human Rights" organization showed what it said were settlers attacking the Israeli solidarity activists, beating them with sticks and stones, and burning their car.

Video footage shows a man pouring liquid on the parked car in the fields before setting it on fire.

"Settler violence has become a real mark on the forehead of Israeli society," said the executive director of the aforementioned organization, Avi Daboush. "Settler violence is directed primarily against all Palestinians and everyone who rejects their theory of the superiority of the Jewish race."

The Israeli police stated in a statement that they had opened an investigation after receiving a report this morning, Friday, about an incident of violence and arson near the settlement of "Givat Ronen".

Recent months have witnessed a noticeable increase in attacks by Israeli settlers against Palestinians and left-wing activists in the West Bank.

In a related context, the Palestinian Red Crescent stated today that 79 Palestinians were injured, 10 of whom were shot with rubber bullets, and the rest suffocated, as a result of inhaling tear gas in confrontations with the Israeli army in the north and south of the West Bank.

In the south of the West Bank, an eyewitness told Anadolu Agency that a young man was wounded by a rubber-type bullet in the thigh, and a 16-year-old boy was arrested in clashes in the center of Hebron. The witness stated that clashes erupted after Friday prayers between the occupation army and Palestinian youths protesting against the occupation and settlements.