During a junior hockey match this weekend, a player in the opposing team swung a club straight in the face of 19-year-old Hille / Åbyggebys player Kid Andersson, who was then sitting in the replacement booth. The player is now reported to the police and the incident is classified as aggravated assault. 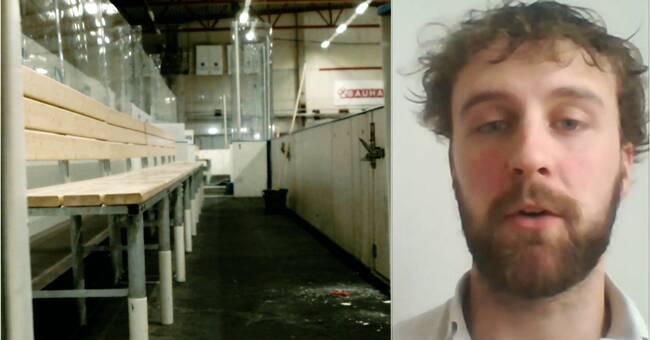 This weekend, Hille / Åbyggeby IK played a match in the J20 series against a team from Dalarna.

Hille / Åbyggebys player Kid Andersson sprays water against an opponent from the booth during a technical match and shortly afterwards gets a club swung with full force in the face.

SVT Gävleborg has been in contact with Kids' family who declines an interview, but has shared a picture of the injury.

- No one understood what happened until we saw all the blood and a tooth hanging.

I made an immediate emergency call after an ambulance, says Jesper Hansson, coach of Hille / Åbyggeby IK J20.

In addition to the police report, the disciplinary committee in Dalarna must also take a position on the case.

- There are careless blows in hockey but this was extraordinary, Rolf Rickmo chairman of the Dalarna Ice Hockey Association's disciplinary committee.

We regret what happened"

The opposing team sends this in an email to SVT Gävleborg.

To managers in Hille / Åbyggeby IK

Unfortunately, an incident occurred that led to one of your players being seriously injured.

We regret what happened, this type of behavior from a player is not something that we as an association stand for.

The player in question is currently suspended from all activities in the association.

During the week, the board together with the leader will talk to the current player and the team about what happened.

We are awaiting feedback and investigation from the district's disciplinary committee.