Today's Ukraine has been independent since the fall of the USSR in 1991, after a first short-lived independence between 1917 and 1921. It then emerged from the rubble of the Russian Empire, before being… 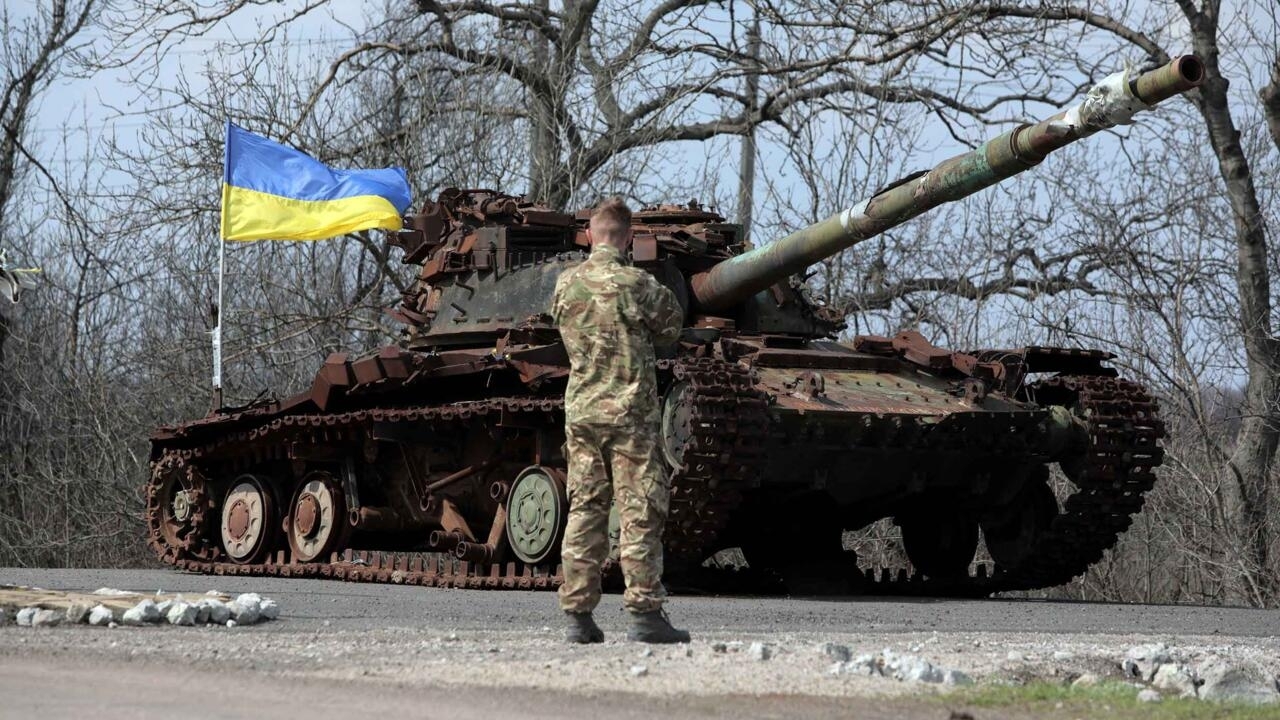 A Ukrainian soldier stands in front of a tank destroyed in 2014 by Russian-backed separatists, on the front line near the small town of Pisky, in the Donetsk region, on April 21, 2021. © Aleksey Filippov/AFP

Text by: The Conversation

Today's Ukraine has been independent since the fall of the USSR in 1991, after a first short-lived independence between 1917 and 1921. It then emerged from the rubble of the Russian Empire, before being swallowed up by the new Soviet entity.

A similar fate awaits it today, when it has been amputated since 2014 from Crimea, annexed by Russia following a flash referendum rejected by the entire international community, and from a part of Donbass, at its eastern end, under the control of two secessionist republics largely supported by Moscow?

Alexandra Goujon, Lecturer, member of the Center for Research and Studies in Law and Political Science (Credespo),

Alexandra Goujon, political scientist, lecturer at the University of Burgundy and teacher at Sciences Po Paris, member of the Center for research and study in law and political science (Credespo), returns to Ukraine: independence à la guerre, which has just been published by Le Cavalier Bleu, on the ancient and recent history of this State of 45 million inhabitants, the excerpt of which we present to you here shows to what extent it can be considered as a mere object, and not as an actor, of international politics.

A particularly useful read at a time when, once again, tension seems to be at its height on the Russian-Ukrainian border, and the rumors of a large-scale Russian invasion are alarming observers.

“Ukraine is a buffer state.

European leaders often see Ukraine as, at best, a buffer state with Russia, and at worst as falling naturally within the sphere of Russian influence.

Alexandre Scaggion, “Ukraine on the borders of Europe”, Revue

Located between the European Union (EU) to the west and Russia to the east, Ukraine is often referred to as a buffer state, implying that it would not join any military alliance or military organization. economic integration in order to avoid conflicts between neighboring powers. This idea is notably disseminated by a certain number of political leaders and Western experts. In fact, it reinforces a status quo based on the absence of agreement between these same powers as to the geopolitical future of Ukraine. In 2013-2014, the plan to sign an association agreement with the EU and then the Russian intervention in Crimea and the Donbass reshuffled the cards: these events proved, according to some, that the status of buffer state is not tenable for Ukraine while for others, they reveal, on the contrary,all its sharpness.

After its independence in 1991, Ukraine began a rapprochement with the European Economic Community in the name of a "return to Europe" proclaimed in particular by the first President of Ukraine, Leonid Kravtchouk. In 1994, a partnership and cooperation agreement was signed between Kiev and Brussels to help the country consolidate its democratic regime and develop its economy. The same year, Ukraine joined the "Partnership for Peace", a cooperation program of the North Atlantic Treaty Organization (NATO) for non-member countries. And, under Western pressure, it accepts, in exchange for guarantees on its territorial integrity, to part with its nuclear arsenal which is returned to Russia (Budapest memorandum).

However, relations are complicated with Moscow, which recognizes, with difficulty, the independence of Ukraine, considered by many Russian politicians and intellectuals as the cradle of the Russian state. The beginnings of Leonid Kuchma's presidency (1994-2005) sought to ease tensions. In May 1997, Boris Yeltsin's first visit to Kiev led to the signing of agreements on the sharing of the Black Sea fleet, formerly Soviet and stationed in the port of Sevastopol in Crimea, and on the rental for twenty years of this same port to Russia; a treaty of friendship, cooperation and partnership attests to Moscow's recognition of Ukrainian borders.

The links with Western countries are however not at a standstill: Bill Clinton goes twice to Kiev while Kuchma makes two trips to the United States which provide significant financial aid to his country. But the authoritarian practices of the Ukrainian president and the revelations of a sale of anti-missile radars to Iraq tarnished relations with the West at the end of his mandate.

The Orange Revolution of 2004-2005 brought Viktor Yushchenko to power, who wanted to make his country's membership of the EU and NATO a priority. After the great enlargement of the EU to the east (2004), a European neighborhood policy was launched to promote trade and stabilize border states. In 2009, the EU offered six of its neighbors (Ukraine, Belarus, Moldova, Georgia, Armenia, Azerbaijan) an Eastern Partnership enabling them to benefit, in the long term, from an association agreement, a free -extensive exchange and visa-free regime. It is a question of avoiding a new iron curtain in Europe. The prospect of membership is not yet on the agenda: there is no consensus among the Member States. As for Russia, which rejects this status of neighbour, its cooperation with the EU has been carried out since 2003,through a specific strategic partnership.

Russia wants to prevent Ukraine's integration into the EU and NATO at all costs.

Since coming to power at the end of 1999, Vladimir Putin has sought to restore Russia's power in the world and in Europe.

Mirroring European construction, a Eurasian Economic Union project is proposed to the post-Soviet states belonging to what Russia calls its “near abroad”.

The first step is a Customs Union, which came into force in 2010, between Russia, Belarus and Kazakhstan, later joined by Armenia and Kyrgyzstan.

But the leaders of four states (Ukraine, Moldova, Georgia, Armenia) are continuing their negotiations with the EU in order to offer a perspective deemed more promising for their countries and to limit Russia's domination.

Since the 2000s, Russian diplomacy has used the economic interdependence with its neighbours, built in the Russian Empire and then in the USSR, to put pressure on their foreign policy. It is thus waging trade wars, under the guise of health or regulatory reasons, as in 2006 with Georgian wine banned from being imported into Russia, its main market, while the President of Georgia, Mikhail Saakashvili, brought to power by the Revolution of roses of 2003, pursues a pro-Western policy.

With Ukraine, gas disputes intensified in the winter of 2005-2006, after the Orange Revolution, when Russia wanted to align the price of gas, which until then had been very advantageous, with that practiced in Europe and demanded from Kiev the settlement of its payment arrears: Kiev asks for a gradual increase refused by Moscow, which interrupts deliveries. The same scenario occurs in 2009 and this time affects many European countries.

It was, paradoxically, at the start of Viktor Yanukovych's pro-Russian presidency (2010-2014) that the association agreement with the EU was concluded and then initialed (March 2012). But, from 2010, Yanukovych also signed an agreement with Russia, extending until 2042 the lease of the port of Sevastopol against a discount on the price of Russian gas. A law on the country's military neutrality was also adopted and enshrined the abandonment of the Action Plan with a view to joining NATO, demanded without success by the previous presidency. While the signing of association agreements between the EU and its neighbors is scheduled for the end of November 2013, Yanukovych did an about-face, at the last moment and under Russian pressure, just like his Armenian counterpart.This reversal provoked the Maidan Revolution which did not prevent the Ukrainian president from signing a series of economic agreements with Russia a few weeks later. But the police repression on Maidan accentuated the revolt and ended up making him flee to Russia in February 2014.

Understanding the origins of the crisis in Ukraine in 5 minutes, Le Monde, 28 Apr. 2015.

Elected in May 2014, the new President Petro Poroshenko takes over the policy of European integration.

But, in the meantime, Russia annexes Crimea and supports a separatism in the east of Ukraine which provokes a deadly conflict between the Ukrainian army and the insurgents of the self-proclaimed republics of Donetsk and Luhansk.

The association agreement with the EU was finally signed in June 2014 and then ratified.

The free trade zone started in 2016, and since 2017 Ukrainian citizens have been granted visa exemption for short stays in the EU. In response, Russia puts an end to the free trade agreement with Ukraine, adopted in 2011, and prohibits the import of certain Ukrainian products: the Ukrainian authorities retaliate with similar measures with regard to Russian products.

Since the internationally deemed illegal annexation of Crimea and the Russian intervention in the Donbass, the European Union has adopted several series of sanctions against Russia, following the example of the United States, Canada, Australia and other western countries. These sanctions are, first of all, political with a limitation of diplomatic relations with Russia, including its exclusion from the G8, a ban on travel to the EU and a freeze on assets for individuals involved in the questioning of the territorial integrity and sovereignty of Ukraine: in May 2021, this measure concerns 177 persons and 48 entities. The sanctions are also economic and target several sectors including defence, oil and banks.Russia responds with counter-sanctions hitting agricultural products in particular and a non-public blacklist of American and European nationals banned from entering its territory. All these elements lead some observers to speak of a new cold war.

In addition to integration into the EU, the conflict in the east revives the prospect of Ukraine's membership of NATO, considered vital by Kiev, which inscribes it, in 2019, in its Constitution, thus abandoning the status of military neutrality declared in 2010.

In 2021, the Ukrainian authorities, including President Volodymyr Zelensky, elected in 2019, are lobbying their Western allies for this perspective to be endorsed. The leaders of certain European states including France and Germany are reserved, partly so as not to offend Russia, unlike those of Poland and the Baltic countries. The Russian threat in eastern Ukraine is precisely made to put off Westerners, while in return it reinforces the Ukrainian elites in the merits of their request for protection from Euro-Atlantic organizations.

Ukrainian leaders do not consider their country as a buffer state unlike some Western leaders or specialists.

Since 2014, the annexation of Crimea and the conflict in the east have reinforced their plan to have their country join the EU and NATO.

But, despite their political, financial and military aid, Westerners remain undecided about the future of a Ukraine which, in spite of itself, finds itself in a situation of a buffer state which Russia is exploiting: in the absence of being able to an ally, Moscow uses force by insisting on the anomaly of history that it represents in its eyes.

This article is republished from The Conversation under a Creative Commons license.