“The scale of the absurdity is off scale”: a bill on the supply of weapons to Ukraine under Lend-Lease has been submitted to the US Senate

A group of US senators presented a draft law "On the protection of Ukraine's democracy under Lend-Lease", which is designed to simplify the provision of military assistance to this country. According to its authors, the document will provide the US President "the tools necessary to quickly send critical defense assets to Ukraine and decisively confront the Kremlin." The bill also qualifies any cyber attack against critical infrastructure carried out against Ukraine from Russia as an “armed attack.” The Federation Council of the Russian Federation called the document another provocation. Experts, in turn, note that in the event of a further increase in Washington's arms supplies to Kiev, the conflict in the Donbass may again turn into an acute phase. 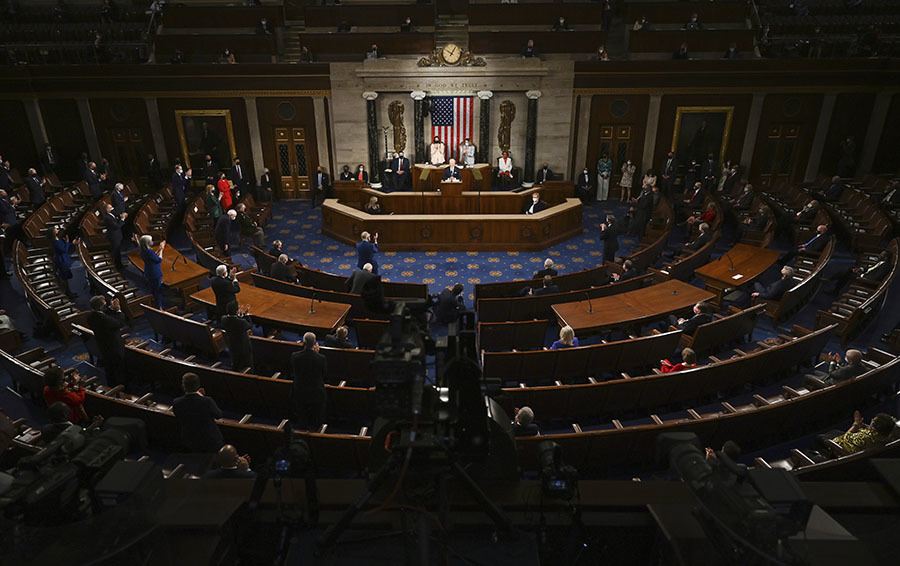 US senators have introduced a bill "On the protection of Ukraine's democracy under Lend-Lease", which is designed to simplify the provision of military assistance to Kiev.

This is stated in a statement published on the official website of the Democrat and senior member of the Senate committees on the armed forces and foreign relations, Gene Shaheen.

“This document would provide the president (USA.

) with expanded powers to more quickly conclude lend-lease agreements with Ukraine directly and would expedite the dispatch of military equipment and equipment necessary to protect vulnerable civilians from a Russian military invasion,” notes in the message.

According to Shaheen, this legislative initiative demonstrates that there is cross-party unity in Congress on the issue of giving US President Joe Biden "the tools needed to quickly send Ukraine critical defense assets and decisively confront the Kremlin."

“This bill ensures that bureaucratic obstacles do not prevent the administration (USA.

) from acting quickly to provide Ukraine with the necessary funds to protect the civilian population in case (Vladimir. -

) Putin decides to invade,” Shahin said, emphasizing that The Russian Federation will "pay a huge price" if it "escalates the conflict."

According to the senator, "there is too much at stake", and therefore Congress must act quickly and together "to get the bill to cross the finish line."

As specified on the Shahin website, the document will require the US President or his designee to determine the procedure for accelerated procedures for the delivery of "any military equipment and equipment provided to Ukraine on loan or temporary use" to ensure their timely transfer to Kiev.

In addition, the bill qualifies any cyber attack on critical infrastructure “carried out against Ukraine from Russia as an armed attack” by the Russian Federation.

It is also noted that the document proposed by lawmakers will remain in force until Russia restores the number of its troops on the border with Ukraine "to the levels that existed before March 2021."

The draft law "On the protection of the democracy of Ukraine under Lend-Lease" was commented on by other senators who submitted it to the upper house.

Thus, Texas Republican Senator John Cornyn said that the proposed document would allow the United States to once again serve as an "arsenal of democracy" and supply Ukraine with lethal weapons "to counter the threat to its sovereignty posed by Russia."

“Without a doubt, (manifestation.

) weakness provokes such authoritarian figures as Vladimir Putin, and the threat of sanctions or financial support for Ukraine will not be enough to prevent an invasion,” he said.

In turn, Mississippi Republican Senator Roger Wicker emphasized that the proposed bill must be adopted without delay by an overwhelming majority of votes from both parties and signed by the US President.

“Expanding the ability of the United States to send critical equipment and equipment under Lend-Lease would effectively strengthen the Ukrainian people to fight and win in the confrontation with powerful Russian forces,” he argues.

Russia also reacted to the initiative of the American senators.

Crimean representative in the Federation Council Olga Kovitidi, in an interview with RIA Novosti, called it another provocation aimed at “destabilizing the situation in the region”, which is located in close proximity to the Russian borders.

“The provocative behavior of the collective West is taking place against the backdrop of an aggressive anti-Russian information campaign aimed at a completely non-peaceful solution to the intra-Ukrainian crisis,” she added.

Recall that the United States and a number of other Western countries continue to accuse Russia of plans to "invade" Ukraine.

So, the head of the White House, Joe Biden, during his recent press conference, said that if the Russian Federation implements its allegedly aggressive intentions, then for Moscow "it will be a disaster."

According to the official representative of the Russian Foreign Ministry, Maria Zakharova, they are being nominated by Western countries in order to create "information cover for preparing their own large-scale provocations, including military ones" in Ukraine.

The diplomat, referring to representatives of the Pentagon, also recalled that in 2014-2021, the United States provided military assistance to Kiev for a total of $2.5 billion.

“Before the New Year, CNN reported that J. Biden additionally allocated another $200 million to Ukraine for these purposes. In 2022, the US military budget provides for $300 million for such expenses,” she noted during a briefing on January 20, emphasizing that in Ukraine a similar aid is perceived as "carte blanche to conduct a military operation in the Donbass."

In addition, Biden recently noted that he had already sent Kiev “technological equipment and defensive weapons worth more than $600 million.”

“Pumping up the state with weapons”

According to experts, against the background of the hysteria that the West has unleashed around the notorious “invasion” of Russia into Ukraine, there is “some kind of competition” in the US Congress in terms of measures directed against the Russian Federation.

“So a group of senators decided to invent a document that suggests a new form of providing military equipment to Ukraine.

If before that it was about the so-called military assistance, now it is about lend-lease, a special kind of credit plan that would allow deliveries to be made faster, ”Yuri Rogulev, director of the Franklin Roosevelt Foundation for the Study of the United States at Moscow State University, explained in a comment to RT.

According to him, the new bill once again proves that Ukraine for the United States is a kind of market for weapons, often used and decommissioned, which then requires repair and supply of spare parts.

“And it is precisely these details that Washington is ready to supply to Kiev, but already for the money of Ukrainian taxpayers, and considerable ones,” the expert said.

Speaking about the situation in Congress and, in particular, in the Senate, Rogulev noted that when it comes to initiatives relating to Russia and Ukraine, there is “some consolidated unity” among legislators.

“For example, voices against the United States intensifying its campaign to invent ways how to hit Russia harder and how best to “help” Ukraine are practically not heard,” the analyst stated.

However, as Rogulev noted, this does not mean at all that the Lend-Lease bill is guaranteed to pass Congress.

“Many initiatives for one reason or another do not reach the finish line.

In addition, the bills of congressmen who are not directly involved in foreign policy are far from always supported by the head of the White House, who is directly responsible for the laws he signed, ”the expert said.

However, from his point of view, it is beneficial for the United States to use Ukraine as a lever of pressure on Russia.

“The United States has already invested significant amounts of money in the Ukrainian project, so they will definitely continue their policy aimed at alienating Ukraine from Russia as much as possible,” predicts Rogulev.

American political scientist Malek Dudakov, in an interview with RT, also noted that the new bill fits into the general line of Washington's policy towards Ukraine and Russia.

“This bill assumes that any cyber attack is an act of aggression against Ukraine.

And if you remember that the United States unreasonably blames the Russian authorities for almost all cybercrimes, then it becomes obvious that the scale of the absurdity of the initiative goes off scale, ”Dudakov argues.

He also believes that the new bill of a group of senators is some kind of "an attempt to tie Biden's hands."

“Representatives of the upper house of Congress want to force the head of the White House to actively act on the anti-Russian direction and the Ukrainian track,” the analyst is sure.

In his opinion, such initiatives do not contribute to the settlement of the situation in Ukraine.

He stressed that the United States is already "deeply engaged in the militarization" of this country.

“The United States is pumping up the state with its weapons, the concentration of which is increasing all the time, which greatly increases the likelihood of a resumption of the acute phase of the conflict in eastern Ukraine,” Dudakov concluded.