During the Cold War in the second half of the 20th century, there was little cooperation between the Soviet Union, which leads the communist bloc in the world, and China, which is also ruled by a communist regime, and the Soviets, which the Russians inherited after the end of the Cold War, were more technologically advanced 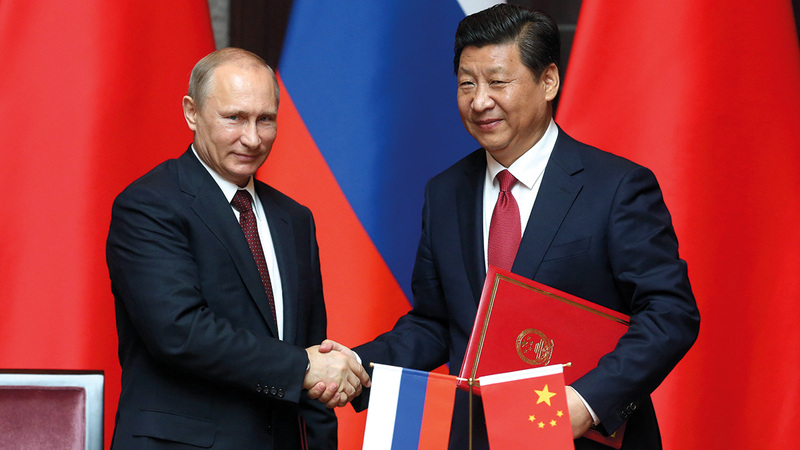 During the Cold War in the second half of the 20th century, there was little cooperation between the Soviet Union, which leads the communist bloc in the world, and China, which is also ruled by a communist regime, and the Soviets, which the Russians inherited after the end of the Cold War, were more technologically advanced and militarily stronger than the Soviet Union. China, and the most desire to impose their ideology on others. At the time, China was mainly inward-focused and struggling, which it later succeeded in, to lift most of its population out of poverty and build an economy that could support these goals. By the early 1960s, a rupture occurred between the two communist powers.

By the 1990s, the world changed, the Cold War ended, the communist bloc collapsed, the Soviet Union disintegrated and its remnants inherited the Russian Federation, and the United States and its Western allies no longer felt real dangers threatening their strategic interests, but the pace of rapprochement between Moscow and Beijing accelerated in recent decades until embodied in Chinese support The strong response to the recent Russian-led intervention to end popular protests in neighboring Kazakhstan. The American strategic analyst, James Stavridis, a retired admiral in the US Navy, wonders how serious this rapprochement between Russia and China is, and whether it applies to the United States and its allies from democratic countries.

“Russia and China share an ancient authoritarian regime and communist ideology,” Stavridis, a former commander in NATO, says in an analysis published by Bloomberg News. They also generally oppose any international move that would allow interference in the internal affairs of any sovereign country, especially when it comes to human rights violations in this country. Chinese President Xi Jinping assured his Russian counterpart, Vladimir Putin, China's strong opposition to any attempt by outside forces to ignite strikes and instigate "color revolutions" in Kazakhstan. In the UN Security Council, the two countries generally use their veto power against resolutions targeting regimes accused of violating human rights from Syria to Venezuela and Myanmar.

"China and Russia are interested in establishing new international institutions that would be an alternative to the institutions led by the United States after World War II, known as the Burton Woods institutions, including the International Monetary Fund and the World Bank," says Stavridis, dean of the Fletcher School of Law and Diplomacy at Tufts University.

Among the new international institutions established by Russia and China are the Collective Security Organization, which includes six former Soviet republics, in which the recent intervention was made to address popular protests in Kazakhstan, the Shanghai Cooperation Organization and the Regional Comprehensive Economic Partnership, a free trade grouping that includes a number of Asian countries in addition to China . The Sino-Russian military relations also witnessed a clear rapprochement, as the two countries carried out in 2018, the largest military maneuvers since the end of the Cold War on the border between Russia and China, under the name "Vostok 2018". More than 300,000 Russian and Chinese soldiers, about 40,000 vehicles, 80 warships, and thousands of planes, helicopters and drones took part in these maneuvers. Xi and Putin attended the maneuver.

Russian and Chinese warships are also carrying out joint exercises not only in the North Pacific, as many expect, but also extending to the eastern Mediterranean, the North Atlantic and the Baltic Sea, in the heart of Europe.

The two countries announced cooperation in the field of space with the aim of establishing a manned station on the moon's surface.

Naturally, there are areas of contention and competition between Russia and China.

The two countries do not agree on dealing with the problem of climate change, for example, as China adopts a more progressive stance to reduce carbon emissions, while Russia seeks to link the former Soviet republics in Central Asia with it, and China seeks to expand its economic and security relations with many of those republics.

In the wake of the US withdrawal from Afghanistan, China is pressing hard to play an influential role in it, while Russia does not show much enthusiasm for getting involved in Afghanistan due to its bad historical experience there.

But Stavridis believes that Russia and China are geopolitically complementary. China is the largest country in the world in terms of population, but it lacks vital natural resources such as oil. It also has a strong and diversified economy and strong influence in East Asia and sub-Saharan Africa.

On the other hand, Russia suffers from a shrinking population and has huge natural gas and oil resources, an undiversified economy and strong influence in parts of Europe, Central Asia and the Caucasus.

Therefore, the two countries together constitute a very powerful and influential duo.

This Russian-Chinese rapprochement is both dangerous and worrisome from the point of view of the United States and the West in general, and concern will only increase if Putin and Xi decide to increase policy coordination, share military bases, make economic concessions, and share military technology such as hypersonic missiles and space weapons.

At the conclusion of his analysis, Stavridis says, “The Sino-Russian rapprochement will have a strong impact on many issues facing the international community, starting from the issues of Taiwan and Ukraine, to human rights issues and the nuclear programs of North Korea and Iran, which necessitates the West to respond positively. Collectively agree to this rapprochement, and reunite the Western ranks, while beginning to unite in the face of the growing Russian threat to Ukraine.”

• The pace of rapprochement between Moscow and Beijing has accelerated in recent decades until it is embodied in the strong Chinese support for the intervention led by Russia recently to end popular protests in neighboring Kazakhstan.

• China and Russia are interested in establishing new international institutions that would be an alternative to the institutions led by the United States after World War II, known as the Burton Woods institutions, including the International Monetary Fund and the World Bank.