Dreams and tears for Virgil Abloh's latest collection for Vuitton

It was in a sky blue "dream house" that Louis Vuitton unveiled Thursday in Paris the latest collection of Virgil Abloh, who died in November at the age of 41, who was applauded standing by a public. 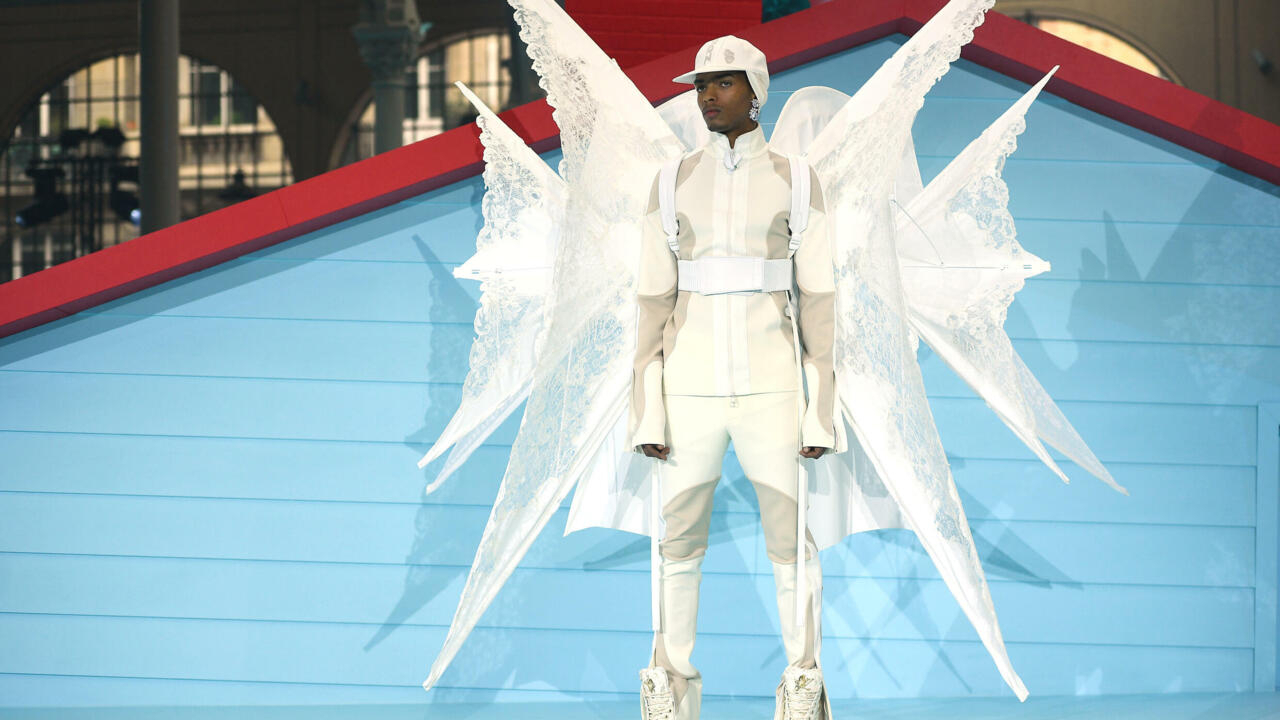 "We need someone of his caliber," Louis Vuitton CEO Michael Burke told Le Figaro to be published on Friday, raising the question of succession for the first time, without mentioning any names.

Models in white outfits with angel wings closed the Louis Vuitton fashion show under the glass roofs of the Carreau du temple, the highlight of men's ready-to-wear week in Paris.

When the designer traditionally comes to greet the public after the show, some 30 members of Virgil Abloh's team, wearing T-shirts in the colors of the setting sun, purple and orange, walked on the catwalk triggering tears and standing ovation.

Virgil Abloh greets the public at the end of a parade in Paris, February 28, 2019 Philippe LOPEZ AFP / Archives

The parade-performance of which Virgil Abloh, designer, architect and DJ, was fond of took place in a staging representing a spacious and open-plan "dream house".

Skirts, laces and heeled boots are omnipresent in the collection, mixing streetwear and classic cuts, as well as kaftans and djellabas, these unisex silhouettes.

An outfit reminiscent of a wedding dress with a train and a veil over a cap is worn by a man.

In the bedroom, the furniture moves to the rhythm of the artists performing dance steps and acrobatics.

At the living room table, the musicians of Chineke!

"He planned everything so perfectly until the last minute," Kim Jones, artistic director of Dior's men's collections, formerly of Vuitton, told AFP.

"Virgil and I have traveled the world together. I feel very lucky to have known him. What a waste when you think what he could have done!"

The collection unveiled Thursday was "95% ready" before Virgil Abloh's death, according to Michael Burke.

He spoke for the first time about the profile of the successor when there are many questions about how to respect the heritage of the black creator who denounced racism and had campaigned for a more inclusive society.

"We will not try to replicate Virgil (...) We need someone of his caliber, but also of Louis Vuitton's caliber, walking from the Jura to Paris. Someone who is not necessarily of the fashion harem, who would be fascinated by this world and would like to conquer it," he said.

We would need a personality who nurtures "a sensitivity to ready-to-wear, which is very important in our business. A creative person who feels the times, who understands the +zeitgeist+ and knows how to synthesize everything that is happening at a T moment by telling great stories," he added.

"It's a choice that will require daring just as Virgil's choice was daring", analyzes Serge Carreira, lecturer at Sciences-Po.

The only black designer in a position of this level in a luxury house with Olivier Rousteing at Balmain, he "embodied a new way of understanding fashion which also includes culture, society, major movements and mixes everything", underlines Serge Carreira.

Author of multiple collaborations, from Nike to Evian and Ikea through exhibitions with the Japanese visual artist Takashi Murakami, "he took less elitist references and with a field of expression that really spoke to very broad categories".

"Virgil showed how to be multidisciplinary and not be afraid to create what you want. It was really powerful. He had an impact on the lives of so many people," Bianca Saunders, stylist, told AFP. Londoner with Afro-Caribbean roots that kicked off Wednesday with a show at Paris Fashion Week.

Another strong event, in homage to the creator, Louis Vuitton joined forces with Sotheby's for a charity sale of 200 pairs of Louis Vuitton and Nike "Air Force 1" sneakers designed by Virgil Abloh, at a minimum of $2,000.

A pair of Louis Vuitton-Nike sneakers designed by Virgil Abloh, displayed at Sotheby's in New York on January 19, 2022, before their auction Ed JONES AFP

Proceeds will be donated to his foundation supporting the training of promising students of African-American and African descent.