"Militarist psychosis": how the Ukrainian authorities are preparing to repel a possible "Russian aggression"

Kiev is ready to make every effort to strengthen the Armed Forces of Ukraine. This was stated by the head of the Office of the President of Ukraine Andriy Yermak. The day before, Ukrainian leader Volodymyr Zelensky said that the country is constantly increasing its defense capabilities and has already achieved significant results. The authorities of the republic, seeking to increase the mobilization potential, are carrying out reforms, involving women in military service and creating a system of territorial defense. However, experts believe that such a policy is not aimed at a real increase in combat capabilities, but at diverting the attention of citizens from acute internal problems. 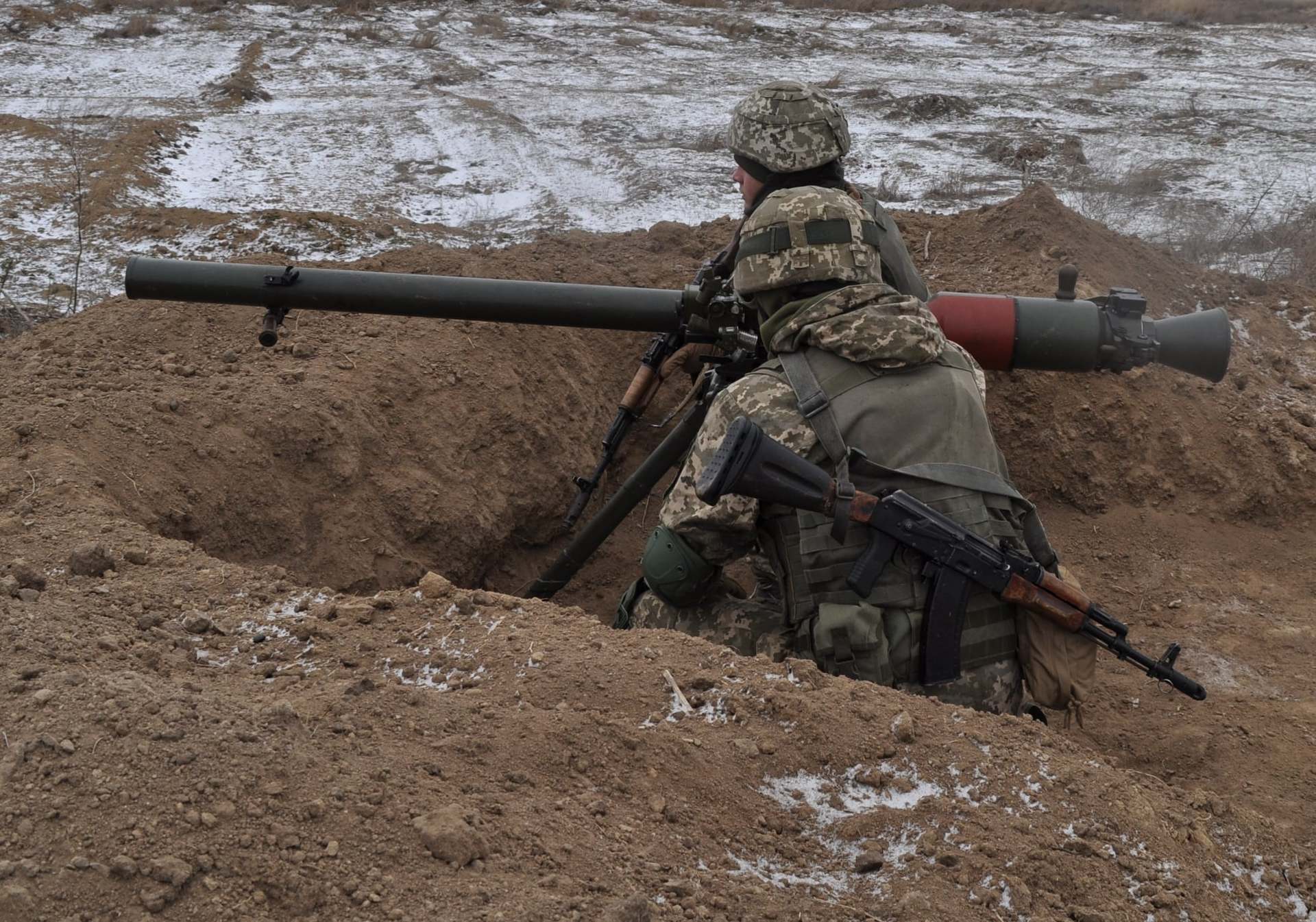 The head of the office of the President of Ukraine, Andriy Yermak, during a conversation with reporters, promised that the state would do everything possible to prepare the country's armed forces for any scenario of the development of the situation at the borders.

“We are taking all necessary measures to be ready for any development of events.

But at the same time, we remain with a cool head in order to minimize the risks for people.

Panic has not yet been a good friend to anyone, ”the press service of the Ukrainian leader quotes Yermak.

On the evening of January 19, in an address to citizens, President of Ukraine Volodymyr Zelensky also urged not to panic over reports of a possible “aggression” by Russia.

At the same time, he did not rule out the possibility of a war.

Moscow has repeatedly spoken about the lack of plans to attack Ukraine.

On January 20, during a press briefing, the official representative of the Russian Foreign Ministry, Maria Zakharova, noted that Ukrainian and Western media are replicating speculations on this topic.

“We are convinced that the goal of this campaign is to create an information cover for preparing their own large-scale provocations, including military ones, which can have the most tragic consequences for regional and global security,” Zakharova said.

She added that Moscow's fears were confirmed by real provocative actions, such as the transfer of a significant amount of weapons to Kiev by the UK.

Zakharova warned Western countries against promoting the militarization of Ukraine.

In his opinion, Kiev, on the one hand, supports alarmist sentiments in society, on the other hand, it does not want to allow panic, making “soothing statements” about the growing power of the Armed Forces of Ukraine.

“We have already seen how the General Staff of Ukraine first talks about the concentration of a huge group of Russian troops near the borders, which is about to allegedly invade.

And then the opposite information is voiced at the official level.

In my opinion, such behavior is an outright provocation that does not speak in favor of the so-called elite of Ukraine,” says Baranets.

According to experts interviewed by RT, in addition to foreign arms supplies, the most striking manifestations of the militarization and Russophobic hysteria of official Kiev were its attempts to create a system that would put under arms a significant part of the able-bodied population of Ukraine, including women.

So, at the end of December, on its Facebook page, the Main Directorate of the Ministry of Defense of the country announced that women with a profession related to the military specialty and fit to serve in the army should be registered with the military.

The list of such professions existed before, but with new legislative changes it has expanded significantly.

The list of specialties was approved on December 17, it includes 35 areas of professional activity.

As specified in the Ministry of Defense of Ukraine, the innovation applies to women aged 18 to 60 years.

They must register by the end of 2022 at the place of registration.

It is noted that the initiative is in line with the country's course towards the implementation of NATO standards.

In peacetime, women who are liable for military service can volunteer to serve in the army or become reservists.

In the event of the outbreak of hostilities, the state has the right to mobilize the representatives of the weaker sex directly into the ranks of the Armed Forces of Ukraine or involve them in various defense activities.

The new order of military registration caused a mixed reaction in Ukrainian society.

People's deputy from the "Servant of the People" Maxim Buzhansky submitted to the Verkhovna Rada bill No. 6482 that only female doctors should be registered for military registration without fail.

A petition was published on the website of the office of the President of Ukraine calling for the return of legal force to the list of professions, which was approved by a government decree of October 14, 1994.

More than 37 thousand people put electronic signatures under the appeal.

On January 17, responding to the petition, Volodymyr Zelensky admitted that the change in the procedure for the military registration of women caused a wide public outcry.

In this regard, he asked Defense Minister Alexei Reznikov to work out the issue of reducing the number of professions related to military specialties.

Commenting on the topic of military registration of women, an RT source in the Batkivshchyna party said that in this way Kiev tried to transfer the experience of Israel to Ukrainian realities, where the fairer sex is required to undergo military service.

Also in Israel, women can be mobilized in wartime, but this requires their consent.

“It is not enough to copy the experience of Israel.

The country's leadership simply does not realize how it is really possible to protect Ukraine.

Hence the plans to attract women to the military service.

Also, many nuances related to ensuring the normal service of women in the army, for example, their protection from possible harassment, were not thought out, ”says the deputy.

"Hysteria is being forced artificially"

Another major military reform that Kiev is carrying out has been the organizational design of the Territorial Defense Forces (TrO).

On January 1, the law “On the Foundations of National Resistance” came into force in Ukraine, which allows, if necessary, to involve almost the entire population of Ukraine in ensuring military security.

Particular attention in the document is given to territorial defense.

According to the law, Troops must be volunteer units to patrol the streets, maintain public order and participate in hostilities.

In total, 25 brigades and more than 150 battalions will be formed.

Even now, in addition to men, women are being recruited to serve in the Troops.

In mid-January, the American publication Defense News published a short article about the territorial defense forces of Ukraine.

In it, fighter Alisa Bankovskaya said that such formations could prevent a repetition of the events of 2014 in Crimea, Donetsk and Lugansk.

Meanwhile, the expert community of Ukraine is skeptical about the actions of the authorities in the field of creating a system of territorial defense.

Local analysts draw attention to the weak level of training and technical equipment of the Troops, as well as their insufficient number.

So, at the end of December, at the presentation of the study "Targeted Model of Territorial Defense", Viktor Kevlyuk, an expert from the Center for Defense Strategies, announced the need to form a group of 400,000 people.

At the same time, the official plans of Kiev are limited to putting under arms more than 130 thousand fighters.

Viktor Baranets believes that the idea of ​​forming the territorial defense forces of Ukraine was dictated to a large extent by the "militarist psychosis" of Kiev.

“In recent years, the General Staff of the Armed Forces of Ukraine has caught fire with the idea of ​​​​creating territorial defense troops.

But for their training and uniforms, considerable resources are needed, and Kiev, by and large, has nowhere to get them from.

With this idea and women's military registration, the Ukrainian authorities are trying to distract the population from pressing internal problems.

It is obvious that the real military potential of Ukraine will not increase from all these measures,” Baranets stated.

In a conversation with RT, Sergei Margulis, lecturer in the Department of International Politics and Foreign Regional Studies at the Institute of Social Sciences of the RANEPA, also suggested that Kiev's military reforms would be fruitless.

In his opinion, the current militarization is aimed only at diverting the attention of citizens from the difficult socio-economic situation.

“Kiev regularly intimidates the population, although if you take a sober look at the latest steps of the General Staff and the Ministry of Defense, it is clear that the Ukrainian army is not preparing for a serious war.

All this hysteria about the aggression of the Russian Federation is forced artificially.

And, as it seems to me, the population has no desire to fight.

And no one is going to attack Ukraine either,” Margulis summed up.