China News Service, Beijing, January 19th. On the 19th, the TV feature film "Zero Tolerance" broadcast the fifth episode "Always on the Road", which was called "annual anti-corruption blockbuster" by netizens.   In the last episode of the feature film, Zhou Jiangyong, former member of the Zhejiang Provincial Party Committee and former secretary of the Hangzhou Municipal Party Committee, and Zha 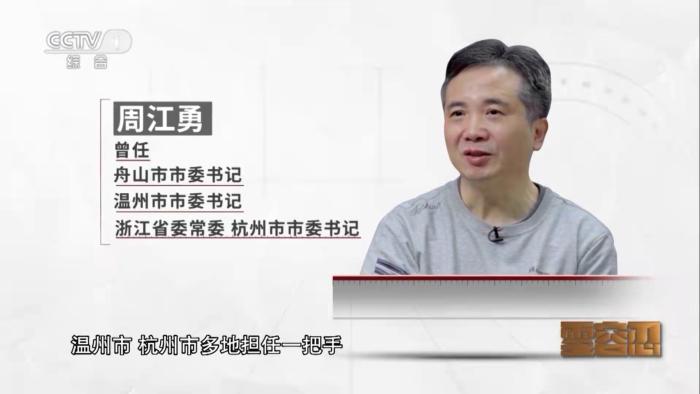 The younger brother took more than 90 million yuan in "borrowing"

Zhou Jiangyong was born in September 1967. It is the local cadres of Zhejiang. He served in Ningbo, Zhoushan, Wenzhou, Hangzhou, Zhejiang.

"Forever on the road" disclosure, Zhejiang is an active area of ​​the market economy, and some of the leading cadres have the problem of "a two-system" issue.

Zhou Jiang Yong is this situation. He and your younger brother Zhou Jianyong one from the government, one business, and use public power to help the younger brother.

The special film introduces, Zhou Jianyong is a business sea, giving all the businessmen to use him to hunting Zhou Jiang Yong's opportunity.

Zhou Jiangyong acts as a backer for his younger brother's affiliated companies. He not only provides assistance in business operations, but even intervenes in judicial affairs to help related companies evade criminal punishment in environmental pollution cases.

The feature film revealed that Shi Shihong, the owner of a construction company, took the initiative to find a relationship and met Zhou Jianyong. Zhou Jianyong also helped Shi Shihong to contract projects through his brother. The brothers jointly accepted huge bribes and invested in the family business as capital.

From 2013 to 2017, Zhou Jiangyong provided assistance to Shi Shihong in multiple projects involving Zhoushan and Wenzhou in accordance with the requests conveyed by Zhou Jianyong. The money sent by the money is more than 90 million yuan.

Zhou Jiang Yong believes that it can avoid supervision by setting "firewall".

In the process of accepting red bribery in history, he and the history of the history never contact, all through your brother as a bridge.

"From my case, I have committed serious mistakes and crimes, and I am deeply remorseful. This is really, really painful." Zhou Jiangyong said in remorse.

In accepting bribes, less than 2 million

In the early 1990s, he came to Hainan and successively served as deputy director of the Hainan Provincial Administration for Industry and Commerce, head of the discipline inspection team, member of the Standing Committee of the Sanya Municipal Party Committee, deputy mayor, deputy secretary of the Municipal Party Committee, director of the Hainan Provincial Tourism Administration, and mayor of Danzhou City. , The municipal party committee secretary is equal.

On December 3, 2020, Zhang Qi was sentenced to life imprisonment for accepting bribes.

Zhang Qi has been deeply involved in Hainan for many years. From 2005 to 2019, his corruption amounted to more than 107 million yuan during his tenure in Sanya, Danzhou and Haikou.

It is worth mentioning that when he was "double-opened", the official notified Zhang Qi that he was "disloyal to the party, dishonest, deliberately resisting the organization's censorship, did not report personal matters as required, and did not truthfully explain problems when organizing conversations."

In the 19th, "Forever On the Road", Zhang Qi escaping the means of regulatory.

In terms of power and money transactions, of the more than 100 million yuan that Zhang Qi took in bribes, he directly received less than 2 million yuan, and the rest were received through his wife and son, and he used "business investment" as a guise.

Zhang Qi's wife, Qian Ling, went to sea to do business in her early years. After the 18th National Congress of the Communist Party of China, the central government banned the spouses, children and their spouses of leading cadres from doing business and running enterprises within their jurisdiction. Zhang Qi arranged for his wife to disown the company on the surface. In fact, it is hidden behind the scenes.

Qian Ling and Zhang Qi are a typical front store.

In addition, the feature film revealed that when Zhang Qi's son Zhang Yan was studying in Canada, a boss gave his son 100,000 Canadian dollars as "living expenses" in front of Zhang Qi.

After Zhang Yan returned from studying abroad, he proposed that he wanted to do business. Zhang Qi introduced various bosses to him, and once again "borrowed" from the boss to his son as capital.

Zhang Qi: I hope to take my son to come back.

The feature film revealed that in September 2019, Zhang Qi was placed on file for review and investigation and took lien measures.

Since his son is involved in the case, China issued a red wanted order to the world.

Zhang Qi said that he regretted letting his son flee, and hoped that he could persuade him to come back during the review period. He sent dozens of WeChat messages to his son, but his son never responded.

"I'm sorry to my 93-year-old father and 87-year-old mother. My mother especially said that you can't take other people's money, you can't ask them for money, and you can't ask for other people's things. Once my wife went to the mall to buy something, with a shopping card, she I went shopping with my mother, and when my mother saw it, she asked her where the shopping card came from, my wife said it was given, and my mother turned her head and left, asking her to return it."

Zhang Qi confessed: "It was I who ruined this family. It used to be a happy family of four generations. Now it's broken. As a man, be loyal and filial. Not only can I not be loyal to the country now. And it became the sinner of the country, and the filial piety can not be all. "(End)