In a dramatic parliamentary session on January 9, the Iraqi parliament re-elected Muhammad al-Halbousi for another term as parliament speaker. Although this vote led to an increase in the internal division among the Shiites, it revealed the ability of the Shiite cleric, Muqtada al-Sadr, to change 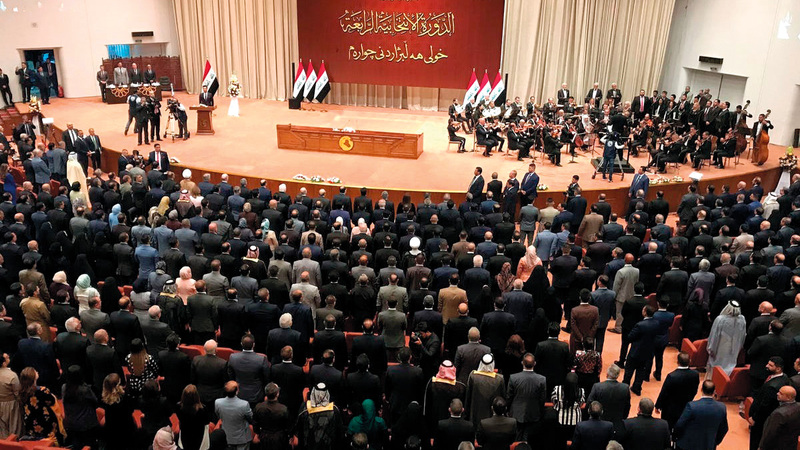 The largest party in parliament, with 70 seats

In a dramatic parliamentary session on January 9, the Iraqi parliament re-elected Muhammad al-Halbousi for another term as parliament speaker.

Although this vote led to an increase in the internal division among the Shiites, it revealed the ability of the Shiite cleric, Muqtada al-Sadr, to change the political dynamics in Iraq.

The session was attended by the Sadrist bloc, the Sunni Progress Movement, the Azm Alliance, and the Kurdistan Democratic Party, in addition to other small groups, and voted for al-Halbousi and his two deputies.

According to the Iraqi constitution, Parliament has a deadline of 30 days from the date of the first session to elect the new president of Iraq, who will ask the largest bloc in Parliament to form a government.

So far, there is no agreement between the main political blocs in Iraq, and the political system that came after 2003 in Iraq focused on informal power-sharing arrangements between Arab Shiites, Arab Sunnis, and Kurds.

The Shiite representation is divided into two blocs

Al-Halbousi's election can be considered a victory for the Sadrist bloc over the "Framework and Coordination" bloc allied with Iran.

It seems these days that the political representation of the Iraqi Shiites is divided into two large blocs, the first is the Sadrist bloc led by Muqtada al-Sadr, and he is one of the most famous leaders who emerged in the post-2003 era. As for the other Shiite bloc, it is the "Coordination Framework", which is a loose coalition, most of which are formed One of the Shiite parties, which includes two former heads of government, and influential Shiite political figures.

The Sadrist bloc won about 40% of the seats that the Shiites won in the October 2021 elections. Given the complex nature of the Coordinating Framework coalition, it is still unclear how many seats it could get in Parliament, but most likely they could get about 70 a seat.

As the largest party in parliament, the Sadrist movement re-voted al-Halbousi, while the Coordination Framework bloc boycotted him, and a similar division emerged among the Kurds as well.

The Kurdish Democratic Party led by Musa Barzani attended the vote, while the Patriotic Union of Kurdistan joined the coordination framework in boycotting the vote.

Al-Sadr described the vote as an important step towards forming a national majority government. Since the October 2021 elections, the Sadrist movement has had two options, trying to form a national majority government in a coalition with non-Shiite parties, or finding an understanding with the Iraqi political opposition parties. The coordination framework parties proposed only one option, which was to form a consensus government, but al-Sadr was of the opinion that forming a majority government means reaching the main winners in the elections from Sunnis and Kurds, and excluding other political forces in the political spectrum. Of course, the majority government can be responsible and effective with regard to clear tasks, expectations, and responsibilities, but this idea is rejected by the Coordination Framework bloc, and by every major party, except for the Sadrist movement.

Al-Sadr appears serious about forming a majority government, which would challenge the status quo in post-2003 Iraq. At the same time, he realizes that he does not have the guaranteed support of other parties.

Although the Sunnis and the Kurdistan National Party joined the Sadrist movement in the elections for the speaker of parliament, the issue of electing the president and the prime minister is a more complex issue.

Any Sadrist majority government would rely on the support of the Kurdistan Democratic Party (KDP) and the new alliance known as "Progress and Azm", the two main political winners among the Kurds and Sunnis.

Sadr can form a new government, in agreement with the Patriotic Union of Kurdistan.

On the other hand, al-Sadr can form a national majority government by splitting the coordination framework bloc, and obtaining the support of Shiite alliances, such as the National Authority, the State Coalition and the Fatah Alliance.

3 challenges in front of the chest

Sadr will face three major challenges in any attempt to form an alliance with the Kurds and Sunnis.

First, although the understanding between al-Sadr, the Kurds, and al-Halbousi existed before the election, the PUK and the Sunni parties have so far rejected the idea of ​​forming an alliance with a single Shiite bloc.

This led to the formation of a balance in the number of seats between two Sunni blocs, which complicated matters for al-Halbousi, who presents himself as the leader or representative of the Sunnis in Iraq.

And thirdly, if al-Sadr was able to obtain the support of the KDP and al-Halbousi, the Shiite Sadrist component of the government coalition would not form a majority, which would make it the first non-Shia-dominated government in the post-2003 period, and this would make it difficult to obtain Support the Shiite community.

Most likely, these challenges will push Al-Sadr to reach out to the Shiite forces, within the coordination framework, to form a consensus government led by the Sadrist bloc. The Sadrist bloc may look to finding an understanding with the opposition, and this last option may appeal to al-Sadr, who has always presented himself as a rebel, and wants to hold the Baghdad government accountable. Sadr's supporters, who do not discuss any of his options, may view him as the leader who sacrificed political power for the sake of his country. This is not the first time that al-Sadr has threatened to leave the government and join the opposition, but what is different these days is that the Sadrists control about 70 A seat in parliament, and they could win the support of small groups to form a huge opposition bloc, and if al-Sadr decided to implement this idea, he would be the most important opposition force in the post-2003 Iraqi political system.

Given the personal competition between al-Maliki and al-Sadr, this outcome will have major implications for al-Sadr's image and credibility.

In fact, the loss of the ability to appoint thousands of senior and private positions in the Iraqi government will make al-Sadr hesitate to form an opposition coalition, and when controlling these appointments, politicians can be allowed to direct national policy, and develop their political, ethno-sectarian, and economic interests, but if al-Sadr is in the position of the opposition That would deprive him of this opportunity.

And if al-Sadr is not present in the next government, the Coordination Framework bloc and its allied militias will control Iraq, allowing the militias to continue operating without pressure from the government, and weapons from several parties will not be illegally confiscated, which al-Sadr intends to confiscate, and al-Sadr’s international supporters will be injured. with disappointment.

• The loss of the ability to appoint thousands of senior and private positions in the Iraqi government will make al-Sadr hesitate to form an opposition coalition.

• If al-Sadr is not present in the next government, the Coordination Framework bloc and its allied militias will control Iraq, which will allow the militias to continue operating outside the Iraqi security forces without facing pressure from the government.