Has the Egyptian Stock Exchange become one of the worst financial markets in the region?

Foreign investors continued to sell in the Egyptian Stock Exchange for the second week in a row since the beginning of the new year, after a year that was also characterized by selling and modest results. Why? 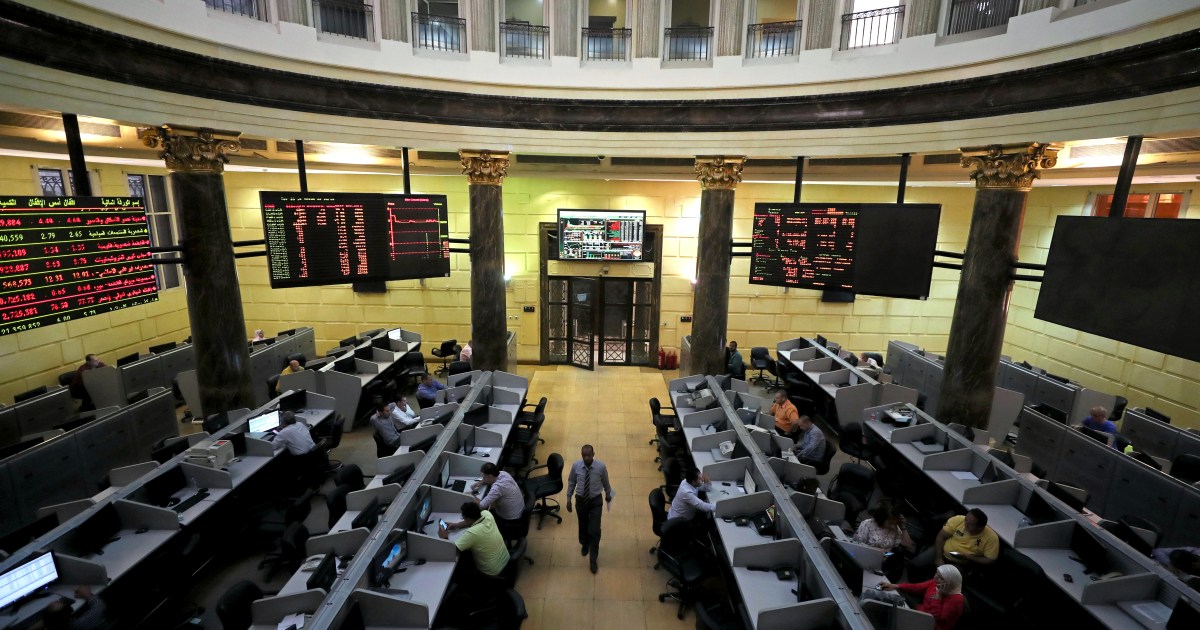 Foreign investors continued selling operations in the Egyptian Stock Exchange for the second week in a row since the beginning of the new year, after a year that was also characterized by selling and modest results. As a result of concern about emerging markets, and the sustainability of high Egyptian returns.

The performance of the Egyptian Stock Exchange came below expectations, and less than its counterparts in the Gulf countries in 2021. The annual report of the Stock Exchange indicated that the main index "EGX30" (EGX30) increased by 10.18% last year, and the secondary indicators were much less, as the "EGX" index rose 100" by 5.08%, and the "EGX70" index increased by only 2.64%.

While the Abu Dhabi market index topped the list of record rises by more than 68%, and the Saudi "Tadawul" index jumped by about 30% (the highest gains since 2007), and the Dubai Financial Market recorded a rise of 28.2%, and the first index in Kuwait ended the year's transactions with an increase of 26.2%, the Bahrain Stock Exchange index rose by 20.6%, the Muscat market index rose by 13%, and the Qatar Stock Exchange index increased by 11.4%.

The foreign sales were as follows:

– 152.6 million pounds, net foreign sales on the Egyptian Stock Exchange in the first week of this year, (a dollar equals 15.7 pounds).

– 152 million pounds, net foreign sales on the Egyptian Stock Exchange in the second week of this year.

The exit of foreigners since the Corona pandemic

The economic website "Enterprise" describes the results of the Egyptian Stock Exchange as an indication of improvement, but it is not in any way a sure indicator of the health of the stock exchange, because it is still lagging significantly behind its regional counterparts.

The year 2020, which witnessed the emergence of the Corona virus pandemic, was a bad year for the Egyptian Stock Exchange, which came among the worst performing stock exchanges, as it ended the year with a decline of more than 23% over the year, with foreigners leaving the market, and trading throughout the year remaining under the control of individual investors. To a large extent, depending on the site.

Sales of foreign investors amounted to about 15.3 billion pounds in 2020, by acquiring 16% of the total transactions on the Egyptian Stock Exchange.

I left and didn't come back

Capital markets expert Dr. Wael El-Nahhas says that the funds that entered the Egyptian Stock Exchange after the flotation process at the end of 2016, most of them left the market, and there is not much of that money left, and the rest is real foreign investment, and “the investments that came out of Egypt and North African countries turned into The markets of the Gulf countries are looking for quick profits, but they are hot money and not real investments.”

Al-Nahhas believes, in statements to Al-Jazeera Net, that there is no need to worry in light of the rise in the Egyptian cash reserve at about 41 billion dollars, and if there is talk abroad about pressure on the banking sector and foreign assets and the like, "I think they are acceptable concerns, but they are not effective, and I expect the government to negotiate with the International Monetary Fund to extend the terms of the loans.”

In general, the shares of Egyptian companies - according to Al-Nahhas - do not express their true value, after the stock exchange was subjected to multiple violent shocks since 2011, leading to the flotation process and the evaporation of part of the Egyptians' savings and investments, in addition to the rise in inflation to high levels;

Hence, the Egyptian market has so far not attracted the investments that fled from it, and any improvement is contingent on increasing offerings within the stock market, whether governmental or private.

What is the effect of capital gains tax?

What increases the complications of the improvement in the situation of the Egyptian Stock Exchange is the entry into force of the capital gains tax of 10% at the beginning of this year, amid the concern of many investors and analysts about the possible negative impact of the tax on the trading volume.

Egypt competed with Bulgaria, Costa Rica, Mauritius and Jamaica for the title of the worst stock exchange in the world in 2020, and the Morning Star Index listed the Egyptian Stock Exchange as the third worst performer in the world after Brazil and Colombia.

In turn, Professor of Economics, Dr. Abdel Nabi Abdel Muttalib, believes that “the Egyptian Stock Exchange is not a mirror of the local economy as in the economies of developed countries, and what happens in the Egyptian Stock Exchange is seizing opportunities and profits and not a real investment, and therefore it does not reflect the conditions of the economy positively or negatively, and foreigners have mechanisms are what makes them more profitable.”

Abdel-Nabi Abdel-Muttalib explained, in statements to Al-Jazeera Net, that foreigners have tools to influence the Egyptian Stock Exchange when the economic conditions are stable, and far from government interventions and decisions that can cause a lack of clarity in the future vision of their investment plans.

Abdul Muttalib considered that the concern that some investors have, whether in the Egyptian Stock Exchange or debt instruments, is a legitimate concern, but it does not necessarily reflect the presence of investment concerns, because the profits they get in the Egyptian market are much better than what they get in their countries because of what the Egyptian government provides from Guarantees through government decisions and not economic mechanisms, such as maintaining the exchange rate of the pound, and raising interest rates to keep foreign investors.

Simultaneously, foreign analysts revealed, in a Reuters report, that some foreign investors have become wary of buying local Egyptian treasury bonds due to concerns related to emerging markets and the sustainability of high Egyptian returns.

The stability of the Egyptian pound and the high returns on treasury bills prompted foreigners to buy the Egyptian currency to invest in short-term treasury bills only to reconvert them into dollars when they mature, and to achieve huge returns, around 13.25% on average, before deducting an income tax of 20%.

However, according to many analysts, concerns are growing about whether the central bank will be able to continue to support the pound and pay such high amounts, especially if there is another economic shock, after keeping the pound exchange rate at the level of 15.7 pounds to the dollar to preserve funds. Investors when exiting and making profits.

Farouk Sousse, an economist at Goldman Sachs, said, “The markets generally view Egypt as more vulnerable in the (globally) price environment due to its large financing requirements, and its heavy reliance on foreign investors to buy treasury bills in the local currency.”