A large drone was seen at Norrtälje airport in December

Drones have been observed at several Swedish protected objects in recent days. SVT can now report that a similar incident took place at the Swedish Maritime Administration's helicopter base at Norrtälje Airport already in December. - It has not happened before that we observed a drone of this size. If it had collided with one of our helicopters, it would have been serious, says flight manager Carl-Johan Malmberg. 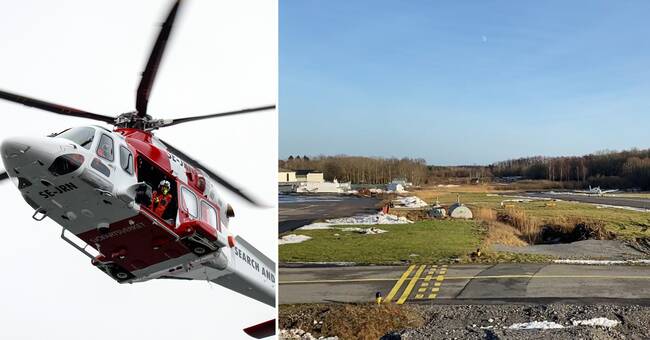 It was on December 16, shortly after the Swedish Maritime Administration's helicopter landed, that the crew observed a drone in the airport's airspace.

- It moved at low altitude above the airport for a few minutes before it disappeared, says Carl-Johan Malmberg, flight manager at the Swedish Maritime Administration's helicopter unit.

SVT has received a report to the Accident Investigation Board which was made shortly after the incident.

It appears that the crew at first does not perceive that it is a drone.

"Immediately after landing (...) the cabin crew shouts 'there will be a helicopter'"

The report describes how the drone shines with a headlight on the crew before it disappears out of sight:

"The crew notes that the flying object is standing still and 'hooves' at a height of about 50-75 meters."

When the headlight is off, the crew can no longer follow the object, not even with so-called night vision goggles used for night vision.

Did not belong to the police or emergency services

The Swedish Maritime Administration's staff could not identify the drone and did not try to follow it.

- What you can say is that it was perceived as a larger drone.

It was not a toy, says Carl-Johan Malmberg.

The Swedish Maritime Administration contacted police and rescue services in the area to rule out that the drone belonged to them.

- They had no information about it and had not had any business in the air during this time.

"Collision had been serious"

According to Carl-Johan Malmberg, the event is unique.

- It has not happened before that we observed a drone of this size at any of our helicopter bases.

If it had collided with one of our helicopters, it would have been serious.

On the other hand, this is not a crime, as there is no flight ban over Norrtälje Airport.

- By definition, it is not forbidden to fly drones here, but it is also not very judicious.

On Monday, there were reports of suspected illegal drone flights over the airports in Luleå and Kiruna.

The observations that should have been made on 13 and 14 January are now being investigated by the police.

The report of the incident in Norrtälje was dropped by the Accident Investigation Board, as it was considered that the information about the incident was too scarce.