The island of the Hunga Tonga Hunga Ha'apai submarine volcano, which erupted on January 15 causing a gigantic mushroom of steam and ash, has almost completely disappeared... 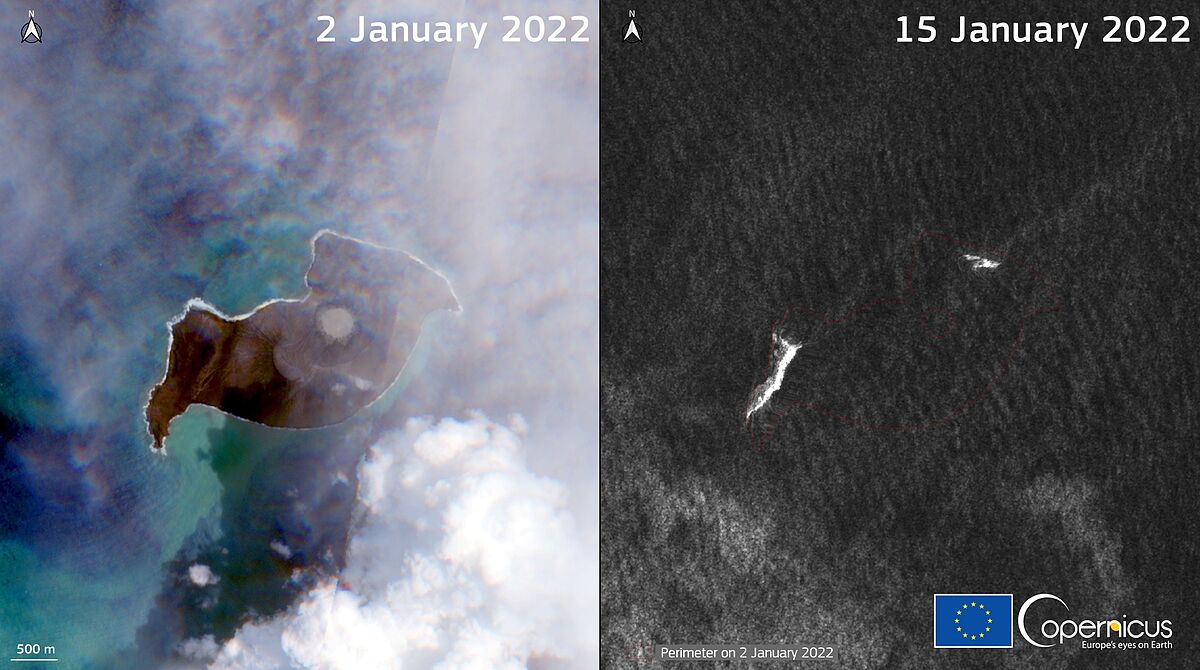 The island of the Hunga Tonga Hunga Ha'apai submarine volcano, which erupted on January 15 causing a gigantic mushroom of steam and ash, has almost completely disappeared after the explosion, as can be seen in the images captured by the Observation Program satellites of the Earth of the European Union.

As can be seen in the images, hours after the eruption, the archipelago has been submerged almost entirely under water and only two small parts of the island can be seen on the surface.

More outlying islands are feared to have disappeared after the eruption,

one of the most powerful in 30 years.

The authorities have not confirmed any deaths so far, but communications are at a standstill, so many Tongans abroad are still waiting to communicate with family and friends after two days without being able to contact.

Both New Zealand and Australia sent surveillance flights for more information, with New Zealand authorities saying there was "significant damage" along the western coast of

The volcano, located in the "Ring of Fire" of the Pacific Ocean, an area where the meeting of tectonic plates causes high seismic activity, the Hunga Tonga -Hunga Ha'apai volcano measures about 20 km in diameter and 1,800 meters high, and is It is almost completely submerged.

It is located at the bottom of the ocean, but its main crater is at the level of the water.

At the end of December, the volcano erupted underwater, causing

"increasingly powerful explosions linked to the interaction between magma and seawater,"

The largest occurred on Saturday, forming

high that reached the stratosphere.

It quickly became a "volcanic umbrella" several hundred kilometers in diameter over the region,

part of which was buried under ash,

according to the New Zealand seismic agency.

The eruption was so powerful that it triggered a widespread tsunami, flooding coastlines from the United States to Chile and Japan, and killing two people in Peru.

The shock wave was such that

the explosion was heard as far as Alaska, more than 9,000 km away.

"It is exceptional. To my knowledge, the last audible explosion at this distance dates back to that of the Krakatoa volcano in Indonesia in 1883, which killed 36,000 people," Raphaël Grandin stresses.

"The volcano is likely to erupt again in the next few days,"

said Professor Oliver Nebel, from the School of Earth, Atmosphere and Environment at Monash University, Australia.

Affected populations must remain vigilant and take precautions before the ash dissipates.

Tonga is made up of

Some 100,000 people live in Tonga, most of them on the island of Tongatapu.

Interview Mauricio Claver-Carone: "If there are Spanish companies that want to leave Asia for Latin America, the IDB finances their transfer"