Last night, Expo 2020 Dubai, a group of Korean K-pop artists appeared in celebration of their country's National Day at the global event, and accompanied the crowds that gathered to meet them, on a joyful journey into the world of Korean music, as members of the teams welcomed everyone using words 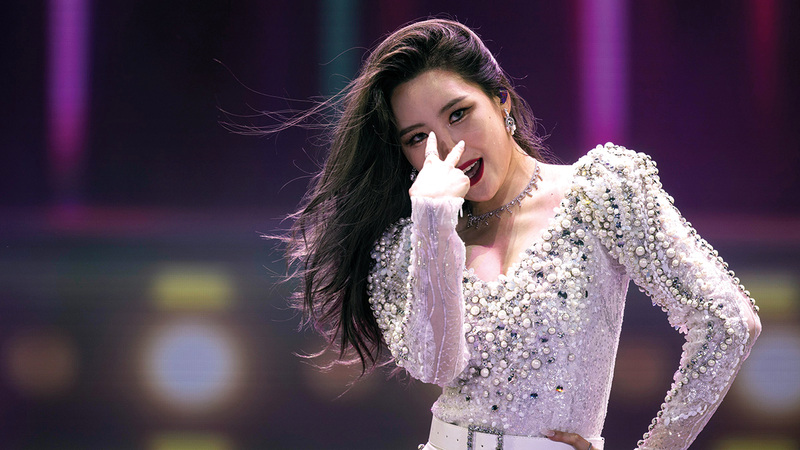 Take the exhibition audience on an exhilarating journey

Last night, Expo 2020 Dubai, a group of Korean K-pop artists appeared in celebration of their country's National Day at the global event, and accompanied the crowds that gathered to meet them, on a joyful journey into the world of Korean music, as members of the teams welcomed everyone Using Arabic words of welcome.

The ceremony began with a dance show that embodied the Korean culture, followed by the band "Forestella", which consists of four main singers, known for its distinguished performances.

The voices of the audience rose to welcome the band, whose members expressed their gratitude for visiting Dubai and standing on the jubilee podium at the "Expo", saying: "We did not know that there were so many K-pop fans and followers here in Dubai.

We are happy to participate in the National Day of Korea in (Expo).”

The ceremony continued with the presentation of the band "GI Del", as the five members of the band performed a number of their most famous songs, amid the interaction of the audience, who performed the dance moves with them.

Members of the band said: “This is our first visit to Dubai, and we are very impressed with it.

Expo has exceeded our imaginations, and we are very happy to meet our art-loving audience.

We invite everyone to visit the Korean Pavilion, it is really impressive, especially in the evening.”

With rapid rhythmic movements to the rhythm of "rap" music, the "Golden Child" band presented their songs, amid warm applause from the "Expo" audience.

The band members told the audience, "We are here for the first time in Dubai, and we were impressed by this different and wonderful city, and also your enthusiasm to meet us, and to listen to K-pop music."

The band performed uplifting songs, including the popular song All Day, which advises focusing on the present and not worrying about the independent.

Despite the continued rain, the audience continued to enjoy the musical performances, and welcomed the singer, songwriter and composer, Sunmi, who presented her own mix of songs that combine "pop", "disco" and others, and inflamed the stage with her dance moves.

The enthusiasm increased with the entry of the members of the "Stry Kids" band, who are the ambassadors of the Korean pavilion at "Expo 2020 Dubai", amid a lot of visual dazzle, through light effects.

The eight-member group welcomed the audience, and extended words of thanks and gratitude for their presence in this Korean celebration par excellence.

The famous singer Psy, known for his song "Gangnam Style", concluded the ceremony, as he began his speech by welcoming the President of the Republic of Korea Moon Jae-in, adding: "Because of the (Corona) pandemic, I have not been on stage for two years... and my presence here today makes me speechless... so your interaction And your presence in this number and your showing your love for me, all of this makes me feel very happy .. so thank you to everyone.”

Psy expressed his surprise that the audience knew every Korean singer who took to the stage during the concert, in addition to knowing the lyrics.

“Golden Child”: We are happy with our Arab fans

Members of one of the most famous K-pop groups, "Golden Child", confirmed that singing to the masses at Expo 2020 Dubai is a great honor, expressing their happiness to participate in their art in the global event, especially during the celebration of their country's National Day at the exhibition.

During a press interview at the "Expo Media Center", before taking the stage, the day before yesterday, to give a concert, the members of "Golden Child" expressed great enthusiasm for their concert.

And about their feelings when they received the offer to sing at the site of the international event, one of the band members said: “We felt happy and excited, for coming and participating in a global platform the size of (Expo 2020 Dubai) is a kind of honor.”

Golden Child members added: "They know that they have a large audience in the Arab region, and they hope to meet their Arab audience, through their concert at (Expo 2020 Dubai), for which they have specially prepared a special program."

Members of the girl group "GI Del", whose members admired the attendees at "Expo 2020 Dubai" with their black and gray embossed outfits, said, "They are proud of their participation and presence to sing in this exceptional location, especially on the National Day of Korea."

As for how the band classifies its performance, the members indicated that their band is unique in its own color, and considers itself a different model from what is around it.

The band members agreed that the Burj Khalifa, which they had only seen through social media and small screens, is the place they prefer to visit after the concert, and they expressed their desire to take memorial photos next to the tallest tower in the world during their second visit to the UAE.