Is there a moment when you don't want to fight? Yes, when looking at the medical report

4 truths in the medical report tell you how hard urban migrant workers are   "I was afraid of transcripts when I was young, but I was afraid of medical examinations when I grew up." For this group of young people, compared to the year-end summary, the medical report may make them more nervous.   Some people say that they are too busy at work and do not have time to go for a medical examination. 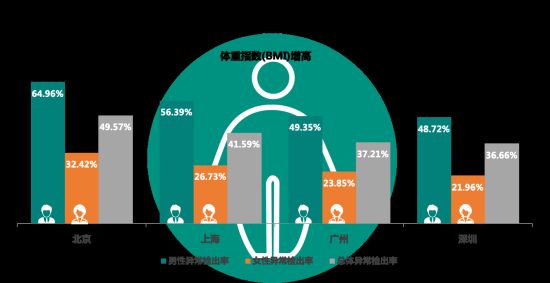 "I was afraid of transcripts when I was young, but I was afraid of medical examinations when I grew up." For this group of young people, compared to the year-end summary, the medical report may make them more nervous.

After all, I know it in my heart, ordering takeout every day, not exercising, eating late-night snacks, staying up late, and reading the medical report does require "Liang Jingru's courage".

After all, regular physical examinations are the most direct way to discover potential diseases.

If you are really "cowardly", let's find some comfort from the "2021 Urban Population Health Report", which is an overall inventory of the health status of urban populations by Akcome Group under the guidance of the China Center for Health Economics at Peking University.

After all, you are not alone on the road of "the more bald, the stronger".

Zhuangshan is not terrible, whoever is fat is embarrassed

According to the latest paper published by The Lancet, there are currently 85 million fat people in China.

This figure means that 6.21% of the total population of siblings are the legendary "European and American figure".

Among them, there are 11 million more obese men than women.

What is "heart wide and fat"?

It's probably "the gentlemen are fat and decent."

No, the men in Beijing are particularly eye-catching.

According to the data of the "2021 Urban Population Health Report", the overall abnormal detection rate of male body mass index (BMI) in Beijing in 2020 is 64.96%, which is equivalent to one or two more fat people than Shanghai, Guangzhou and Shenzhen for every 10 people. .

I have to say that roast duck, fried liver, coke circle, donkey roll, etc. are quite supportive.

Of course, friends in the south don't be careless, just look at the trend of people handing a cup of milk tea, I believe everyone will go further and further on the road to fattening.

"Young people love to drink milk tea. In fact, sugar-sweetened beverages are an important factor in obesity." Liu Jinying, deputy director of the Nutrition Department of the Cancer Hospital of the Chinese Academy of Medical Sciences, said that a balanced diet is the key to weight control.

Modern people eat more and more finely, and consume more and more processed foods, packaged foods, fats, sugars, and meats. Once the calories exceed the absorption capacity of the human body, they will be stored and become big belly and "" Bye meat".

As the old saying goes, the more successful a man is, the bigger his belly will be. Now that success is still on the way, the belly is already in place.

In this regard, Liu Jinying said that once the BMI exceeds 24, the risk of various diseases will increase.

Therefore, body management is still on the agenda.

Very simple, shut your mouth and open your legs.

Liu Jinying suggested that the first is to eat well. "Low-fat, increased protein ratio, and sugar control can all help you lose weight. The key is to balance the diet structure and nutrients." Second, to move, aerobic exercise and strength training are carried out simultaneously.

There is a point of view that practicing yoga alone can only make you a soft fat person, so it is recommended to have a variety of exercises.

Fatty liver, whose fault is it?

When it comes to obesity, we have to say its accompanying symptoms: fatty liver.

For every 100 adults in the world, there are 20-30 patients with fatty liver.

Nowadays, whoever does not have a hint of "mild fatty liver" in their medical report is embarrassed to call themselves a migrant worker.

According to the "2021 Urban Population Health Report", the overall abnormal detection rate of fatty liver in Shanghai in 2020 was 44.10%, the highest among the four first-tier cities.

Obviously, the proportion of abnormal BMI in the urban population in Shanghai is not the highest, why is fatty liver so unique?

It turns out that obesity is not the only cause of fatty liver.

Fat is the enemy of the liver. When the body is in a healthy state, the metabolism is fast, and liver cells can quickly transport fat out through apolipoproteins.

However, if you smoke, drink, stay up all night and eat takeout "all five poisons", the synthesis of protein by liver cells will be blocked, resulting in a large amount of fat accumulation in the liver, which may also induce fatty liver.

Statistics show that the detection rate of fatty liver among men in Shanghai is nearly 60%, which is the highest in first-tier cities.

It is said that young people are under a lot of pressure. It seems that Shanghai is not far behind in this regard.

Comparison of the detection rate of fatty liver in Beijing, Shanghai, Guangzhou and Shenzhen

Fortunately, fatty liver can still be "eaten" back.

Therefore, in the future, when someone toasts, they say they have fatty liver. If it doesn't work, then... exaggerate the condition.

Compared with the high detection rate of fatty liver in men, women obviously need to pay attention to another abnormal indicator: thyroid nodules.

This is a disease that can be initially diagnosed by physical examination, palpation and ultrasonography.

The "2021 Urban Population Health Report" shows that in 2020, the overall detection rate of thyroid nodules in the first-tier cities of Beijing, Shanghai, Guangzhou and Shenzhen will greatly exceed 30%, which is equivalent to one abnormality in every three people. It is said that many friends buy insurance because of this troubled.

The thyroid is the largest endocrine gland in the human body, and thyroid hormones play an important role in human growth, development and metabolism.

Of course, you don't need to worry too much, because most thyroid nodules are benign.

It should be noted that the detection rate of women is higher than that of men.

Contemporary women have too many roles to play, such as wives, mothers, daughters, employees, etc. It is difficult to maintain a good attitude. If they are emotionally unstable, they will increase the chance of illness.

"Thyroid disease is mainly related to mental factors, eating habits and overall lifestyle, such as sleep and regulation of life pressure. Another basic condition is that nutrition should be balanced." Liu Jinying said.

Therefore, it is recommended that female friends be a carefree "little fairy".

"What is the harm of sitting for a long time?" "What kind of exercise is suitable for the office?" Today's young people seem to be healthy, but in fact everyone understands: if you don't practice, the videos about sports are put in your favorites.

Although youth is the capital, the direct consequence of lack of exercise is "bone clear".

No, more than 40% of young people in Beijing, Shanghai and Guangzhou "like to mention" osteoporosis.

Comparison of abnormal detection rates of osteoporosis/osteocytopenia in Beijing, Shanghai, Guangzhou and Shenzhen

When you have frequent back pain, sudden abnormal sound in the bones when bending or squatting, spinal pain, chest tightness and shortness of breath after sitting or standing for a long time, this may be a precursor to osteoporosis.

Bones support various functions of the human body. If you don’t pay enough attention to bone health, many behavioral habits will harm your bones unconsciously.

Such as excessive weight loss, insufficient nutritional supplements, often staying up late, and lack of exercise, these routine operations can lead to bone loss, causing young people to become "more and more spineless".

Therefore, sitting still for a long time is not the way out, even if you take a walk, you should take a few more steps.

After all, the uncle of the neighbor can run three laps around the park, and you are panting behind you?

Therefore, young people should not wear the most expensive mask and stay up the longest night.

After all, many diseases are now not exclusive to the elderly.

For example, prostate abnormalities have become hidden among more than 30% of the population in first-tier cities, while women are deeply troubled by cervical abnormalities.

Our bodies are not tireless, constantly running machines.

"I've become bald and stronger" is just a self-mockery of people in the workplace.

When running for KPIs, let us also slow down and see if our bodies are over-consumed.

After all, health is our biggest bargaining chip, and we cherish it.

This article represents the author's point of view only and does not represent the position of this journal.