Yesterday, the American authorities opened an “international” investigation into the man who detained four people last Saturday inside a synagogue in Colville, Texas, and died during the police storming of the place, while all the hostages came out unharmed, knowing that the perpetrator, who turned out to be a righteous citizen, 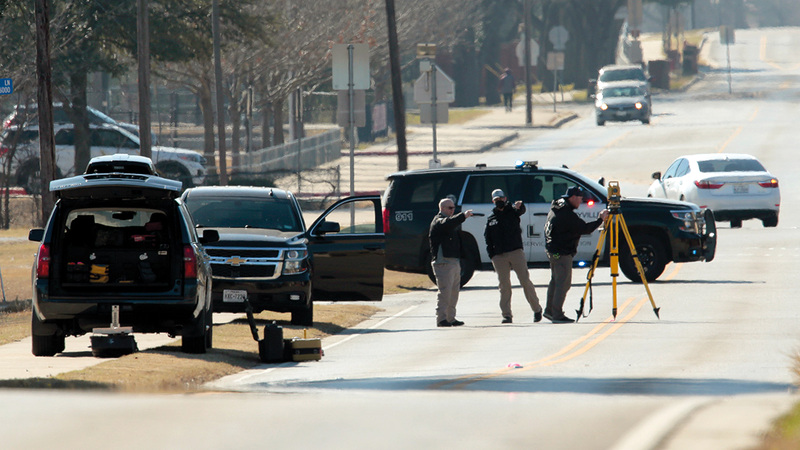 Police in front of the synagogue in the town of Colleville, America.

Yesterday, the American authorities opened an “international” investigation into the man who detained four people last Saturday inside a synagogue in Colville, Texas, and died during the police storming of the place while all the hostages came out unharmed, knowing that the perpetrator, who turned out to be a British citizen, was demanding The release of a Pakistani woman convicted of terrorism.

And British anti-terror police announced that they had arrested two teenagers, on Sunday evening, in connection with the hostage-taking operation inside the synagogue in Texas.

Greater Manchester Police said in a statement: "Two teenagers have been arrested in South Manchester and will remain in custody for questioning."

On Sunday, US President Joe Biden condemned the hostage-taking, describing what happened as a "terrorist act".

He said during a visit to Philadelphia in Pennsylvania, that the operation "was linked to a person who has been in prison for 10 years", apparently confirming information circulating about the request of the perpetrator of the operation to release the prisoner Aafia Siddiqi, a Pakistani scientist who was sentenced by a federal court in New York in 2010 to prison 86 A year for trying to shoot US soldiers while she was in custody in Afghanistan. And the US Federal Bureau of Investigation (FBI) announced that the suspect, who spent the night of Saturday, Sunday, is a British citizen named Malik Faisal Akram, 44.

"So far, there is no indication that anyone else was involved in the operation," the Federal Police said in a statement, adding that investigators were continuing to "analyze evidence in the synagogue" and that investigations were continuing. British Foreign Secretary Liz Truss quickly denounced the "anti-Semitic terrorist act". "Thinking of the Jewish community and all those affected by this disgraceful act in Texas, we condemn this act of terrorism and anti-Semitism, we stand with the United States to defend the rights and freedoms of our citizens against those who sow hate," she wrote on Twitter.

On Sunday night, the four detainees were released, to the relief of the United States.

The Jewish community and Biden repeated the call to combat anti-Semitism, as did Israel, which has followed the issue closely.

"The hostage rescue team stormed the synagogue, and the suspect is dead," Colville Police Chief Michael Miller announced, without specifying whether he ended his life or was beaten to death by police.

Matt Desarno of the FBI in Dallas said that the four hostages, including Rabbi Charlie Citron-Walker, did not need medical attention, stressing that their detainee "was unharmed."

"We will investigate the hostage-taker and his contacts," he added, as part of an "international" investigation.