Chance of a new northern lights night in the south

Yesterday, many were probably amazed at the unusual phenomenon that was seen in the sky in southern Sweden - an unusually powerful and clearly visible aurora borealis. Tonight there is a chance again: - But unfortunately it will be quite cloudy except possibly in northern Svealand and southern Norrland, says SVT's meteorologist Per Stenborg. 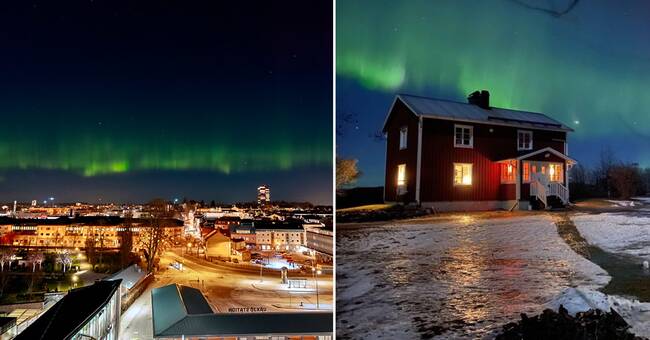 Friday night and night was a bit special in southern Sweden.

Thanks to timing and luck with starry skies, it was possible to see the northern lights in such widely differing places as Siljansnäs, Visby, Stockholm, Jönköping, Skara, Halmstad and Eslöv.

And certainly in many places in between as well.

- I saw it at midnight just before I went to bed.

It was an unusually strong aurora with a lot of movement and colors that varied.

It was a magical evening, says Christian Bodin who picked up his camera equipment to capture the light on film in Mora.

The spectacular light phenomenon occurs when charged particles from the sun, mainly electrons, reach the Earth's atmosphere where they collide with molecules and atoms which are then also charged.

In connection with these then returning to their normal state, they emit light in different colors on the spectrum.

For those at the top of the north, it is commonplace to see the northern lights in the sky (as well as at the South Pole where it is called the southern light).

But the further away from the pole you get, the more unusual it is that the night sky is lit up by the billowing light curtains.

The clouds are thickening

Those who missed out on Friday's rare nature light show unfortunately have only small opportunities to take revenge.

According to SVT's meteorologist Per Stenborg, the clouds will thicken during Saturday.

And around midnight, when the northern lights are usually shining brightest, the sky will be cloudy over almost the entire country, both north and south.

- Possibly the sky will be clear enough from a southern border between northern Värmland to northern Uppland and up towards Jämtland / Härjedalen and Medelpad.

Further south it is probably too cloudy to be able to see the northern lights, even if it is there behind the clouds.

Normally, the southern boundary of the Northern Lights Oval (or more correctly the Arctic Oval) is approximately equal to Kiruna.

But in connection with so-called solar storms, when huge amounts of charged particles are thrown out of the sun in something that most resembles giant fire brooms, disturbances occur in the polar light oval.

It can then be shifted so that the light becomes visible much further south.

A geomagnetic storm on the surface of the sun.

In recent days, several eruptions have taken place in the sun.

On the night before Friday, an unusually strong event occurred, which a few days later had, to say the least, visible effects on the night sky.