Hottest summer so far in Europe

The summer of 2021 in Europe was the warmest measured, new climate data show. Globally, the year was the fifth warmest and 0.3 degrees above the average for the past 30 years. 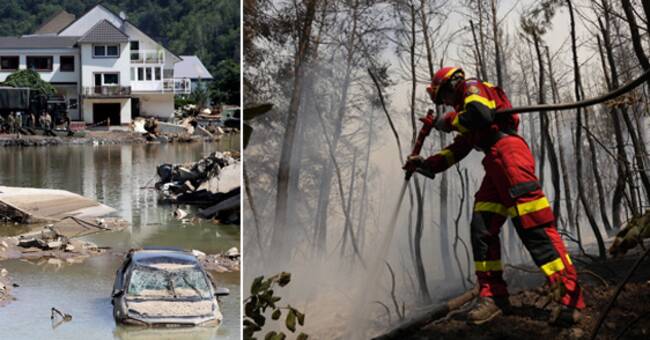 Statistics show that the last seven years have been the warmest measured, according to the EU's environmental monitoring program Copernicus.

In Europe, temperatures have fluctuated sharply.

In April, it was unusually cold - which, among other things, resulted in France's wine production during the year being the lowest in over 60 years - which was followed by a record hot summer.

In Sicily, Italy, a preliminary temperature record was set for Europe: 48.8 degrees, 0.8 degrees above the previous record.

At the same time, extreme weather left its mark on the year, with severe fires in the Mediterranean countries and catastrophic floods in mainly the central and western parts of Europe.

Major floods also occurred in Sweden, including in Gävle.

According to Gunilla Svensson, professor of meteorology who researches climate change at Stockholm University, it is too early to describe the temperature increase of the last seven years as an "acceleration", as the temperature can vary over time.

But it is clear that the earth in a long-term trend is getting warmer.

- We can expect that the extreme heat waves will become more common in a warmer climate.

Looking at the full year 2021 in Europe, the temperature average was not as extreme, only 0.1 degrees warmer than the average for the past 30 years.

The ten warmest years in Europe that have been measured have all occurred during the 2000s and seven of them occurred in the years 2014–2020.

According to Copernicus' preliminary data, the steady increase in greenhouse gases in the atmosphere continued in 2021.

"In order for Europe to live up to the goals of the Paris Agreement, climate data must be analyzed in an efficient way," said Carlo Buontempo, head of Copernicus' climate change service, in a press release.

In the Paris Agreement of 2015, most of the world's countries agreed to keep the increase in global average temperature well below 2 degrees, and preferably below 1.5 degrees, compared to pre-industrial times.

"The analysis for 2021, which shows that the by far warmest years globally have been recorded in the last seven years, is a reminder of the continued rise in temperature and that we must act urgently," he continues.